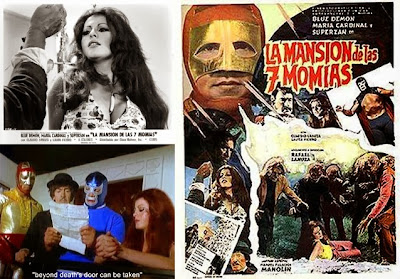 Blue Demon was a popular masked Mexican wrestler who, although he made nowhere near as many films as his contemporary Santo, still managed a respectable 29 movies playing pretty much himself... and he even partnered up in some with Santo (I’ve seen a few of these but I think I was watching these before I started writing this blog so I suspect I haven’t reviewed them here).

It’s easy to laugh at movies like this, and I often do... it’s over half the fun of tracking them down. However, I have to say that out of all the Mexican masked wrestler movies I’ve seen (and the Turkish knock offs, for that matter), that this one is exceptionally well made, relative to the others, and maintains a certain tone throughout which is genuinely haunting and watchable.

Okay, so we do also have all the atrocious acting and wafer thin plotting you come to expect and love with these kinds of movies, but you do get a real sense that everyone is trying their best and there’s even a twist near the end that I didn’t see coming. Also, although it is typically Scooby Doo in its approach to the material, the idea is better than the usual “find the villains, run up and punch them, repeat” content of the majority of the films I’ve seen in this genre. Having said that, of course, there is lots of punching and fighting in store but one of the things that strengthens this movie, compared to other luchador films, is the lack of spontaneously erupting, ringed wrestling matches interrupting the narrative flow. There’s one near the start which is alluded to but not shown and it seemed strange to me that the whole movie wasn’t filled with these scenes like normal for these affairs.

The story line is a little stranger than I was expecting too, but most of the movies I’ve personally watched in this genre range from the late fifties to late sixties, so it might be endemic to these kinds of entertainments of that particular late seventies time frame, perhaps. What I’m talking about here, though, is the fact that you have a good guy and his girlfriend and, when his girlfriend has to face “three supernatural challenges” to inherit her recently deceased fathers horde of treasure, he calls in his two wrestling hero friends, Blue Demon (played by Blue Demon) and Superzan (played by... um... Superzan), to help her. However, after being grabbed by evil forces, he then becomes one of the villains intent on stopping them and, surprisingly, doesn’t return to the side of the heroes once all the fighting is done. Just goes quietly mad and wanders the streets grabbing his box of charcoal (don’t even ask).

So anyway, the girl who’s name I forget (and the IMDB is absolutely no help with films like this, it seems... shame on them) has to complete three tasks around and about The Mansion Of The Seven Mummies which involve grabbing a sceptre, burying a skull and finally freeing a sparrow. Of course, all her efforts are impeded by the devil, some reanimated ancestors and a bunch of mummies. Luckily, Blue Demon, Superzan and their new companion, a comic-relief postman with all the funny expressions and reactions in the world, are there to fight the mummies.

There’s also a voyeuristic hunchback who stalks the lady in question throughout the movie and gives advice when the skull she is trying to bury starts moving around and trying to bite her in, it has to be said, typically ridiculous, unintentionally funny shenanigans. The hunchback character is kind of interesting because he brings to the ending a genuine twist which I’d not seen coming. Now it’s not exactly a clever twist, and if it had been in any other venue than a late 70s Mexican wrestling movie, I would have seen it coming. I think because I wasn’t expecting this to have any kind of script logic or follow through ensured I was not on the lookout for that kind of thing and, while it’s not as blistering a revelation as it could have been, it’s certainly took me unawares and I think people who enjoy these kinds of movies will probably get a kick out of it.

One of the things which make this so much better than some of the entries I’ve see in this genre is the make up effects on the mummies. They’re quite atmospheric and are similar, in some ways, to the work being done on Lucio Fulci’s Zombie Flesh Eaters (reviewed here) in terms of quality. There’s no goriness to them, don’t get me wrong, but they do look appropriately dusty and decayed and, although not really a danger to anyone at any point in the narrative (in credibility terms, that is), I was still quite impressed with these and the sinister atmosphere they help create. I certainly wasn’t expecting to be.

And that’s about all I’ve got to say regarding Mansion Of The Seven Mummies. A very slightly less thin plot than others in this genre, lots of punching/romping around with mummies as our masked heroes take on evil and even a slight twist near the end. Not as completely ludicrous as some of the luchador movies I’ve seen but certainly worth a watch and, honestly, not without a little of its own share of side splitting hilarity in the right places for all the wrong reasons. If you’re a fan of these kinds of movies, this one should be hovering near the top of your ‘to watch’ list.