An Adventure In Space And Time 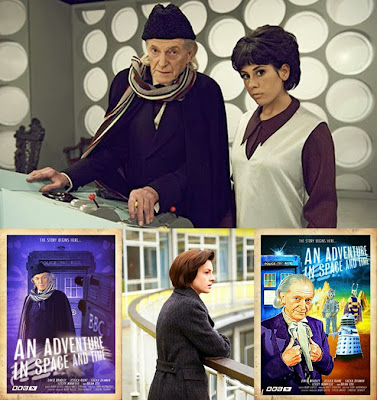 Last night I saw one of the best put together pieces of contemporary television I’d seen in a long time. Written by Mark Gatiss and directed by Terry McDonough, An Adventure In Space And Time is a dramatic retelling of the story behind the first three years of Doctor Who and has been made as part of the fifty year anniversary of the show. It’s not, to be fair, all that detailed a look at the process and events that went down, for sure, but it doesn’t have to be and, anyway, it isn’t the intent. It’s a docu-drama with the emphasis on drama and, therefore, a certain amount of dramatic license has been allowed and utilised throughout the running time. This, however, is one of it’s strengths and allows the writer to weave a spell and create an atmosphere something closer to the heart of the matter... a place where mere facts can’t always explore so... well... so truthfully.

There’s one iffy moment near the end that, right since I’d heard they were making this show, I was wondering whether they’d be bold enough to try and was almost hoping that they would. Well they did but I don’t think the moment I have in mind really quite worked as well as it could but... oh, I’ll get to that later. You might want to shy away from the last few paragraphs here if you haven’t yet seen this and want to have a surprise moment still be a surprise.

Now, as I said, it’s not trying to cover everything but what this show does, and does very well, is take some of the triumphant moments from the first three years of Doctor Who and use them as story highlights to reveal the physical events and the beating hearts that birthed the series. It doesn’t harm things, either, when the casting is so good. David Bradley, Hogwarts caretaker from the Harry Potter films, amongst other roles, plays the actor William Hartnell absolutely pitch perfect and the cast he is with all deliver and, miraculously, many of the actors utilised here look very much like the people they’re playing. This helps but, honestly, they are all so fine in their roles that you almost wouldn’t mind if they looked nothing like the people in question (although it obviously assists very well in maintaining the illusion) as they all tackled the roles, or at least the popular perception of who those people were, with absolute charm and vitality. Jessica Raine channelling the strength of character of the show’s “first female producer at the BBC” Verity Lambert, for example, is absolutely compelling and creates a very strong positive role model for aspiring young people everywhere.

The way the story is introduced with a few scenes from the end of the time period under scrutiny is absolutely brilliant too. Starting off with a scene with Hartnell (sorry... Bradley) in a car, gazing at a police box after he’s just been, pretty much, fired from the role of The Doctor, due to various reasons, the narrative jumps forward a little in time to the shooting of his last story, The Tenth Planet, which introduced the Cybermen to the world, is all pretty good... and then the show jumps back via the TARDIS control panel readout to 1963, which is revisited and used as a device to click off each year as it occurs in the drama. I always kinda half like, half disagree with Mark Gatiss’’ writing (which isn’t a bad emotional response to be left with by someone actually... just means he’s a legitimate artist) but I have to say he’s been slowly growing on me over the last few years and, out of the few bits I’ve seen by him, this stands out as his best work to date... at least in my book.

The show also magically captures the spirit of the sixties, or more accurately, captures that distanced, nostalgic feel that passes as a kind of postmodern shorthand these days for the sixties, and this is injected lovingly into every frame and used to bring out the story in the most wonderous ways. Throughout the running time there are various geeky references and in-jokes and I’m certainly not buying into everything here as gospel, but it’s enjoyable stuff. There also seems to be an undercurrent of things which are put there, not for the likes of me, and which are kinda half hidden beneath the surface of the thing... which I could just about detect but which I can’t quite put a finger on because I don’t know the people in question. I was kinda half picking up  on a repression of certain hints of alternate sexual chemistry with some of the characters, for example... never once spelt out in any fashion but certainly simmering somewhere down there in the subtext. I suspect this is done for the sake of subtlety and to touch upon certain issues for the sake of accuracy without bringing it up as any kind of judgement in itself... which is great. Kind of like extras for the people in question who happen to be watching this show.

Some of the recreations of the clips from the episodes are right on the money too and it looks like the people both in front of, and behind, the camera made every effort to make them so... much more than, say, the crew of the film Hollywoodland did when they were inaccurately reproducing episodes of the George Reeves, 1950 TV show The Adventures Of Superman, for example. And I loved the little nods to the shows past with such villains as the Cybermen, The Daleks, The Menoptra (from The Web Planet story) and Marco Polo from... um... yeah I think you get the idea. I'm just thankful they didn't show the Zarbi.

I also found myself very taken with an anachronistic piece of dialogue which was just perfect but which looks forward to the show’s future while referring back to the past of the audience... when Hartnell finds himself “let go” from the show, he uses exactly the same “I don’t want to go” bits of dialogue that David Tennant spoke just before regenerating in his last story. Which is a bit of an amazing temporal anomaly if you think about it but, you know, that’s what Doctor Who does best after all and... who cares? There wasn’t a dry eye in the house.

Another main “moment” that happened in this whimsical vein, and read no further if you don’t want to spoil the surprise, is something which I thought would be a cool idea for the people behind this to do when they first announced it... I just didn’t think they would be brave enough to do so. Well I was wrong, they did it. Matt Smith is in here, playing himself, playing The Doctor. Or at least the ghost of him from the future, who appears in Hartnell’s mind as he contemplates his last moments on the show. It’s a nice, but cheesy moment, which didn’t quite work for me but Gatiss and the producers were brave to give it a shot and, well, since I also thought it would be a good idea back before they started making this thing, I can’t be too critical of somebody having this idea and running with it. I’m not sure it quite fits and it certainly dates it and anchors future viewings of the show to a 2013 time frame, but it’s quite fun and certainly within the spirit of the show. So I’ll shut up whining about that now and whine about a couple of other things instead.

These things being a few missed opportunities in terms of things covered which I feel might have been good to include and which I suspect were excluded due to factors like running time. The creation of Ron Grainer’s title theme tune, for example. He is credited visually with this but Delia Derbyshire, who was instrumental to the sound of that theme, was kind of short changed here, I felt. Also, a little epilogue with Hartnell’s participation in the ten year anniversary show The Three Doctors might have been nice but it would have maybe have changed the tone the writer wanted from the ending. What I would have liked to have seen, though, since the show was extremely informative to me and showed me a few things I didn’t know (yeah, I know, been watching the show for nearly the whole 45 years of my life and still managed to be informed by this... marvellous) is what Hartnell’s reaction and thoughts at the time were to Peter Cushing playing the big screen version of The Doctor (or actually a character called Doctor Who in the movies, if memory serves me right). It would have been interesting to see how this impacted on him, considering the timing of those movies.

At the end of the day, though, this programme was damn near perfect and, as I emphasised at the start of this review, one of the finest pieces of drama put out on television in years (and easily better than the majority of the episodes from the actual show itself, over the last few years). If you are a lifelong fan of the show, or even if you’re just curious about the early days and Hartnell’s involvement in the show and the gumption of Verity Lambert to get it made, then this one off special is indeed an essential piece of viewing. If the 50th anniversary episode shown on Saturday 23rd November 2013 is even half as good as this one, then we’re in for a good time on that one too.