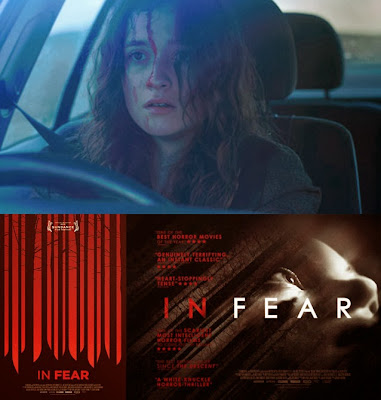 I’m not really sure that I’m inspired to say too much about this movie, in all honesty. Other than it’s fairly effective for a lot of the running time and that, its does what it does very well... for the most part.

It’s not a horror film and neither, really, is it a slasher film... although some people could probably put together an effective argument for the latter and that’s the kind of the genre film I was expecting it to be. I guess psychological thriller, for want of a more appropriate term, could fit this film to a certain extent and it firmly belongs, I think, in that strange, unspecified genre which could be formed if you lump together films like The Hitcher and Duel.

The one really good thing about it is that it was, despite having seen the trailer, not quite what I was expecting, although it did try to follow certain horror film genre rules at a few points and tripped itself off by tipping its hand too early, for sure.

The film is a three hander and, when I say it’s a three hander, I really mean it. Actually, for most of the first two thirds it’s only a two hander but, certainly, there are only three people in the cast in total and, though I suspect budgetary concerns may have played a part in that decision, it certainly bows down before the basic aesthetic of not showing, for example, a sequence in a pub which the two characters talk about and which seems (although it doesn’t really) to have repercussions for them later in the movie. However, I also think there could have been a couple more people in it at a certain point, and I’ll get to that in a little bit, but I can certainly admire the writer’s decision not to include a cluttered jumble of cast, at any rate.

The set up is simple. Two young “almost lovers” Tom and Lucy, played by Iain De Caestecker (the little Scottish guy from Agents Of S.H.I.E.L.D) and Alice Englert (who played Rosa in Sally Potter’s Ginger And Rosa... reviewed here) are on their way to a festival and trying to find a hotel that Tom has checked them in to. But with phone and sat nav signals fairly absent they get lost (and deliberately misdirected) on the country roads around their destination and terrorised by the local psycho. That’s the set up and I guess in some ways it’s pretty dreary. What I wasn’t expecting, though, is the fact that the majority of the film is actually set in their car and the director uses this to firmly establish a “please don’t get out of the car” vibe which, of course, he breaks every so often to set alarm bells ringing in the audience and to stretch the tension out like the surface of a drum. And, as I said above, for the most part it’s very effective and the director plays with your concept of what you feel the safety zone is and it’s all supported by very good performances by actors who seem to thrive on making all the stupid and idiotic decisions characters who are IQ challenged tend to make in these situations.

Unfortunately, that last thing is a double edged sword because the characters really are stupid and as you worry about them more, the more you lose respect for them. Any credibility that these characters could really be as lost and misdirected as they seem to be, flies out the window when you wonder what would happen if logic is applied judiciously to the situation... something neither of the main protagonists seem to want to apply and when the main antagonist of the movie turns up, you really would have to be completely switched off to not recognise the character for who he is. Which is a shame.

Now, here’s my thing, with regards to this particular movie. I was, despite all of the above, on a white knuckle ride for about two thirds of the running time and then, like something which is stretched too far and too soon, I suddenly reached a point where all anxiety stopped for me, I stopped caring about the characters and wondering whether they would get killed or not and, frankly, found myself looking for a clock and trying to figure out what I had to do next after the movie had ended. All tension had disappeared because the director had piled too much on too quickly. And I think this is where the movie could have done with a few more characters. I think a pause was needed by about this point. We needed, in my opinion, to see Tom and Lucy get to absolute safety... before seeing all that destroyed and the rug pulled from under us as their comfortable sanctuary was quickly demolished and they were in danger for their lives again. That, I think, would have helped maintain my interest in the movie and helped ratchet the tension back up to the level it had soared to earlier in the film, giving me cause to care again. But this didn’t happen and instead, when the last, dynamic set piece was played out, ending in a kind of semi-denouement (which I personally think was the right call but which I suspect, judging from the loud protestations at the screening I was at, is going to leave a lot of people unsatisfied), I felt no tension or interest in the ending. I was already working through other things in my mind as I watched and that’s kind of a shame.

But there are some good things about the movie, such as the inevitable “survival” betrayal of one of the characters which is a button pushed to serve as an object lesson by the mad psycho villain and I suspect younger, less jaded audiences who aren’t familiar with these kinds of films will probably get a lot more out of it than this old hand, to be sure. And it’s effective enough for a lot of its running time. Certainly, if you have nothing better to do, then it’s not a bad film to give some of your time too, although I do feel certain kinds of people may come out of the screening a touch angrier than they went in.
Posted by NUTS4R2 at 15:46