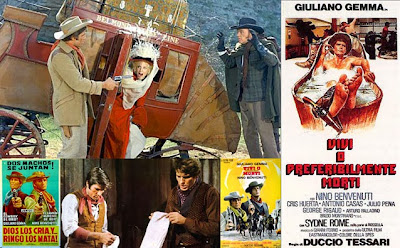 Wow. This is a terrible movie.

If it wasn’t for the fact that the actors, including the legendary Giuliano Gemma (who died earlier this year), are obviously doing their best here with the material, I’d probably just post a one sentence review warning you all to keep away and that would be that. But I think I maybe owe it a little more than that and even the director, whose work I have been okay with when he’s working on various giallo films, has made an effort to do something with this.

Alas, this movie seems to have been cranked out to capitalise on the success of the then recent sub-genre of the Italian western, the “comedy spaghetti western”, which reached its zenith a year later with My Name Is Trinity (Lo chiamavano Trinità...). The comedic element tended to be fairly broad and regularly crossed the line into slapstick on these kinds of films, especially in the Terence Hill and Bud Spencer movies, but here the combination of “lots of fighting” and “hilarity” really strains and, although all involved are appearing to make an effort, it really can’t save the film when the editing and pacing seem to be working so much against it.

The plot set-up is fairly simple. The main protagonist, Monty (played by Gemma), owes lots of debts  to the point that his life is under threat. However, when a relative leaves him three hundred thousand dollars to be collected once he and his estranged brother Ted have been living under the same roof for six months, he heads to the “Wild West” to join his brother, who is none too happy about seeing him, or even that interested in the money, for the most part. This is fine to kick things off with but one of the problems the movie has, while the brothers try to pull off various criminal capers in order to pay just the next month’s rent, is that the story is kinda jumpy and although this perhaps could be blamed on the episodic nature of the scripted shenanigans, it did seem to be forgetting what the main plot line was at several points, only to bring it back later when it was at a convenient point to remind the viewer what it was. Honestly? There is a point to all this codswallop?

Even some of the crazier little details seem to be directionless and fly out the window at the first sign of the next distraction, including things which are set up once and then never referred to again. For instance, in the opening sequence in “the big city”, Monty is attacked by a bunch of thugs and he makes a great show of opening his trick cane and pulling out a big test tube. He drinks the mixture in the test tube and then, like Popeye on a spinach rush, he turns into a super-agile, near invincible fighter who can take on all and sundry (although he soon finds himself in trouble again). Lot’s more fist fights ensue over the length of the movie, some involving him and his brother Ted (played quite charmingly by Olympic boxing champion Nino Benvenuti, in one of only three acting roles he had in his career), but the secret potion in the test tube is not once referred to again. It’s like the film’s script and storyline was constantly changing as the actors shot it and, to be honest, with things I’ve heard over the years about the Italian film industry, I wouldn’t be surprised if that was the case and the actors were following a different storyline every few days, such is the narrative flow, or lack thereof, of this movie. No editing could fix this.

Tessari and his cinematographer introduce some nice shot designs in places, but the way they are spliced together without any real thought in certain places of the way one short sequence may transition into the next, left me feeling a bit underwhelmed. Also, I noticed that a rather inventive shot of two people on rocking chairs, where each rocks into shot from left or right to iterate a portion of their conversation, was also included (with one of the same actors even) on the trailer for one of Tessari’s earlier films Kiss Kiss Bang Bang. Because of the staginess of the shot, it seems like the director is stealing from himself on this and perusing his back catalogue for ideas. I don’t know what the time limits were for the shooting schedule but I’m guessing it must have been pretty pacey.

Gianni Ferrio provides the score for this movie and usually I like what he does on his scores (I have a few recordings in my selection of CDs by this composer, who died back in October of this year). However, the music in this film is also a complete mess, with a terrible running ballad which kinda recaps the story, such as it is, in ways which stretch the credibility of what one might call “rhyme and rhythm” in both the music and the lyrics. Quite appalling. The one bright moment in the score lasts for just a few notes, where a musical joke is inserted as a direct reference to Sergio Leone’s A Fistful Of Dollars but, for the most part, the music is pretty flat, lifeless and unfunny when it’s so obviously trying hard to be exactly the opposite, presumably because the music is trying to help you not notice the fact that, for a comedy western, this movie just isn’t funny.

I wish I had more to say on this one but I just don’t. Alive or Preferably Dead... watch it at your peril.