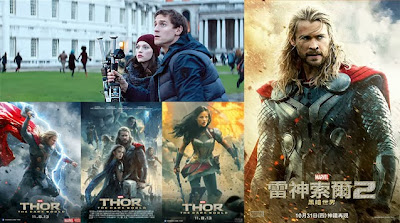 I really liked the first Thor movie (my review here), despite not being as familiar with that particular comic book character as I might have been, or perhaps because of that fact. I quite liked his turn in The Avengers (aka Marvel Avengers Assemble... my review here) movie and so was hoping his third outing wouldn’t make the mistake that the numerologically challenged Iron Man 2 (reviewed here) made and let the first movie down a bit. However, I went in with a fairly open mind and saw what I saw and concluded what I concluded, which is this...

Thor - The Dark World is not a great movie. Having said that though, it’s certainly a quite good movie and absolutely a lot of fun but, most importantly of all, it doesn’t let the first movie down in any way in terms of maintaining the same blend of character chemistry, morality and paciness of the original. The first movie, directed by Kenneth Branagh, had a certain stylistic flair which reminded me of nothing less than the Errol Flynn swashbuckler The Adventures Of Robin Hood, which is a pretty good template for any swashbuckler as far as I’m concerned. This one didn’t quite tick those boxes for me, I have to say, but it did still manage to maintain a certain cavalier attitude in the attitudes of some of the characters which gave it an edge on some of the other Marvel Universe movies doing the rounds in the last year or so.

I liked the interplay between the characters quite a bit in this one. I even liked the normally insufferable Loki, played by Tom Hiddleston, on this occasion... a character I found to be sadly lacking in his first two Marvel Universe appearances but in this one I thought the chemistry between him and Chris Hemsworth’s Thor was pretty watchable, for once. Maybe the script was stronger at the dialogue level. The direction was quite nice in places too, with some really nice shot set ups in certain sequences where foreground and background people and objects created nice angles and relationships between each other (something I think will probably be even more noticeable when I watch a 2D version at some point, I suspect).

The performances were all as brilliant as you would expect from such a cast, with Kat Dennings’ uber intern character adding just the right touches of colour when bouncing off Natalie Portman and co, so that the movie, on many levels, is just a joy to watch. Unfortunately there were some big fails as far as I was concerned...

I didn’t, for instance, think a heck of a lot of the various action sequences which played away from Earth... in Asgard and The Dark World, for example and, considering at least two thirds of the action actually takes place in these environments, I did find my mind wandering at some points. Christopher Eccleston was pretty great as “bad guy of the moment” Malekith but he was under so much make up that if I hadn’t already had known he was in it, I wouldn’t have noticed it was Eccleston. So that’s a shame.

Another great performer, the distinguished actor Stellan Skarsgård, also returned for a third go at his Erik Selvig role, but he has been scripted totally as another “comic relief” ingredient in this movie and, although his performance was as phenomenal as it always is, I didn’t really enjoy the fact that, after his import in the last two movies, he’d been pretty much reduced to a mere running joke in this film.

That being said, there are some unprecedented moments of high silliness in Thor - The Dark World and that really does a lot to act as an antidote to alleviate the dullness of some of the grimmer scenes in Asgard and other alien landscapes and lift it back up to the realm of being a good movie rather than a bland affair. Thor’s encounter with the London Underground right in the middle of the big, final battle sequence, for example is priceless and I really welcomed the inclusion of the Charing Cross tube platform into the narrative... except, note to the writers, Charing Cross station is not three stops from Greenwich, which is on a different line and would require changing trains and be more like a half hour ride. This could not have happened in the context of the narrative people. How hard would that have been to sort out?

All in all, the special effects were competently handled (although I feel a lot of the scenes in this felt like a dry run for Guardians Of The Galaxy in some way, which doesn’t fill me with confidence for that movie when it comes out), the story was sound and, although the various character twists could be seen coming a mile off (the last shot before the end credits run, for example, wasn’t exactly revelatory), the scenes set in London and Greenwich more than compensated for some of the bits which dragged... although I’d have to say Idris Elba was sadly underused. He needs a bigger role fighting alongside Thor in the next one please guys. The pseudo-appearance of another Marvel Universe character halfway through the narrative was also a welcome inclusion, to be sure... Marvel really are applying their early to mid-sixties comic book modus operandi to their movies at this point, quite successfully too, so far.

As far as the music goes, Brian Tyler’s excellent score is great but not as good as his score for Iron Man Three (reviewed here) and, more importantly, not as cool as Patrick Doyle’s score for the first Thor movie. I’ve got nothing against Brian Tyler, I think his music is always good and I am looking forward to receiving this score for Christmas (fingers crossed) but seriously, when will Marvel stop playing musical chairs with their composers and obliterating any musical continuity within the series. To be fair to the always listenable Tyler, he does integrate another composer’s theme for one sequence in this movie, although I can’t tell you what scene and which composer because that will obviously spoil the surprise of that brief cameo for you... but I really think Marvel should start to treat their scores for their movies more seriously at this stage. They are doing so much right now with the scripting, casting and choice of directors that they should really get onto the case.

That aside, if you liked the previous two Thor movies then you really shouldn’t be too worried about this one as you’ll almost certainly have a fairly enjoyable time with it too. And I’ll tell you now, don’t be getting up to go once the end credits start rolling... this movie contains, not only a mid end credits epilogue sequence but also a post end credits epilogue sequence too, which gives a little bit more closure to the actual story on the second epilogue, while setting up the next story arc for at least one of the upcoming Marvel movies on the first of the epilogues.

So there you go. Good movie, not as great as the first one, still quite fun and worth paying out the money for, although I thought the 3D conversion on this one was quite poor, flat and lifeless... it has to be said. Definitely worth a watch for all you Marvel fans though.