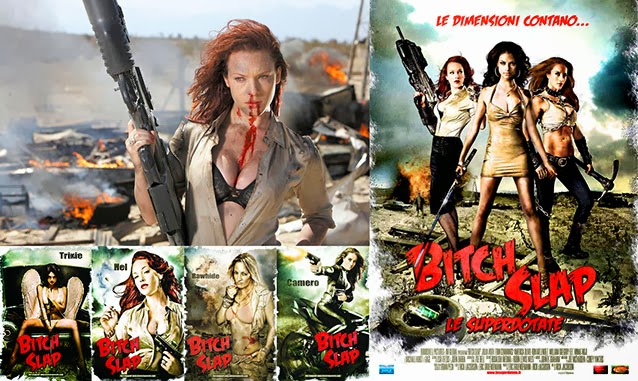 Blimey. This is everything it looked like it was going to be from a trailer I saw a few years ago and, because of that, it’s just not what I was expecting... if that makes any sense.

I bought this DVD because, a) it was going for about £4 and b) it looked vaguely like it was trying to parody another movie I hadn’t at that time seen, namely Faster, Pussycat! Kill! Kill! (reviewed here). The trailer I’d seen had made it look like a substantially dumb movie (nothing wrong with that) which celebrated the female form in a bizarrely blatant manner... which can be fun as long as the female community and characters are in on the joke... slipping in a knowing wink, or a cheek piercing tongue on the sly, to penetrate the unblinking male gaze.

Unfortunately, although the film does have three strong female leads... that’s where the similarity to Russ Meyer’s kitsch classic ends and, even more tragically, the movie is entirely put together from the point of view of the male perspective with not much thought to anything else thrown into the mix... or at least that’s how it seemed to me.

What I’m saying is, the movie completely serves to voyeuristically feed the ‘male gaze’ theory of objectification without even attempting to simultaneously burst that bubble with anything that helps you respect any of the characters (male or female, for that matter) as being anything other than there for the sexual or aesthetic pleasure based on attraction. Now I have a small problem with this because a) it’s a rare beast that doesn’t at least try to address this problem with some kind of have your cake and eat it mentality at some point over the course of a movie and b) I had quite a good time with the movie in spite of knowing all this and my awareness that the movie was deliberately playing up to the male impulse in this manner did nothing to stop me enjoying it, and that bothered me for a little while.

Then I decided not to feel guilty (I don’t really “do guilt” anyway, to be honest) and enjoy it on the level it was intended at but... that doesn’t mean to say I can’t be critical of it at that level. And so I will be.

The film, about three sexy action heroines, has lots of good stuff in it too, to act as a kind of unbalanced counterweight to its negative aspects. One is the elliptical way in which the timeline keeps flashing back all the way through the movie and using that to keep the pacing going and occasionally reveal new things about the characters. Unfortunately, one of those is a major twist moment which doesn’t work right from the outset because, as soon as a certain “mystery character” is set up, you know your list of suspects is going to be a pretty small list and, though the director tries to defuse that near the end, in an almost clever rug pulling moment, the fact is that the script has written itself into a corner so... of course that person is going to turn out to be one of those three (this is my attempt to avoid spoilers people).

And, another plus, is that there is at least a smattering of creative thought running through the movie. Not so much in the various forms of parody on show but in the occasional (very occasional) little detail, such as one of the bad guys having a ring tone on his mobile which is a recording of his voice saying “Ring, Funny Ring”. Stuff like that.

The general broad strokes of grindhouse style cinema are also observed with the usual parody and, like many modern films made as an homage to this genre of movie making, it plays up the sex and violence and turns it up to 11. However, when it comes to the deliberate and wilful stakes of objectification, of which there is always a little room for - male or female - as long as it’s handled with a certain amount of respect and inclusion, then this film goes way past 11 and pushes the boat out and then sinks that damn boat before it gets a chance to return to harbour.

So, yeah, the camera hovers over every inch of the female bodies on screen (with hardly any nudity at all, but that’s really beside the point) and then rewinds and ramps back up in slow motion and you expect some of that up front at the start because it’s kind of a signature to set up a trashy sexploitation feel. However, the film revels in this as almost its sole purpose throughout the entire duration of the movie. I think when it started to really get to me was when the film asked me to believe that three women on a limited, life threatening deadline, and with a wilful purpose to get on with what they are doing, were suddenly going to get distracted and have a water fight so they could splash water at each other and dance around in slow motion for the audience. I loved it and it was obviously knowing... but it does kinda paint the characters as being real airheads, to the point where it contradicts the already established intelligence of the characters in favour of yet another eye candy sequence.

Don’t get me wrong. As a red blooded male I can happily watch attractive, dancing, women jiggling their cleavage and getting into cat fights all day... but there seemed to be a definite lack of respect for the way in which this was achieved in this movie (as stupid as that sounds and I really don’t want to dig myself into a grave here).

So I guess what I’m saying here is, this movie has everything a person who is attracted to women as the basis of their sexuality could want in it: curvy babes, fights, lesbian kissing plus explosions, bullets and more... but the price is a little too high in terms of the way it voyeuristically pursues its goals. Like it’s got something missing.

So can I recommend it?

Well yeah. If you go in with your eyes open and watch it in a group of people with a load of beers or the alcoholic beverage of your choice, then you will probably enjoy it at some level, just like I did. However, if I were a straight woman looking at this movie then I would almost certainly be offended by it at some level (or maybe not... I’m not a woman so I don’t know for sure). I love films with a grindhouse sensibility but there’s something about the approach to the material that makes this one disrespectful to a large percentage of its potential audience and I can only condemn it on that level... which is a shame because I did have an okay time with it.

So only you, I’m afraid, will be able to know whether you can stomach the disrespect and still be able to enjoy yourself watching a movie containing babes, guns and a heavy guitar based soundtrack. If so, then good on yer and give it a watch... but don’t buy into it completely because the knowing reflexivity, if it’s there at all, is either misjudged or not worked through enough... and this did leave a slightly bitter taste in my mouth, to be honest.