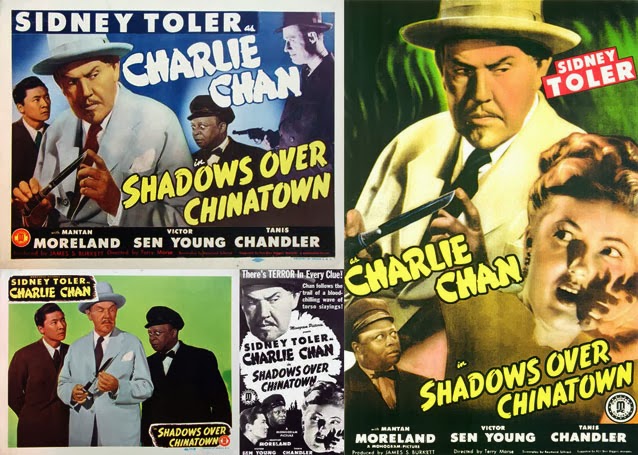 Shadows Over Chinatown is the penultimate of the Charlie Chan films to feature Warner Oland’s replacement, Sidney Toler. I reviewed his final film in the role, before Roland Winters continued in the series, in my review of The Trap (here).

The film starts off very promisingly... 13 passengers on a bus in a rainstorm, including Charlie Chan, Number Two son Jimmy and regular chauffeur Birmingham Brown (as played by Victor Sen Yung and comedian Mantan Moreland), are forced in to a stop to sort the bus out. This is almost a perfect recipe for a murder mystery, I thought to myself, as I was expecting the whole film to be set in the large passenger waiting room... however, it was not to be and is only a brief stop to get the plot up and running and also have someone make an attempt on Charlie Chan’s life.

Two things happened in this opening sequence. One was that I spotted, right off the bat, that one of the background passengers, who even has a couple of words, is an uncredited appearance by John Hamilton... who would, in later years, go on to play Perry White opposite George Reeves in the 1950s TV series, The Adventures of Superman. So it was nice seeing him for the brief amount of screen time he gets here.

The other thing that happened, which popped me right out of the movie, is the little bit where the passengers come into the interior of the bus station. In long shot, the aforementioned Hamilton is seen making a show of taking off his light grey raincoat, to reveal a much darker suit, and then removing his hat before sitting down at the right of the screen. However in the next shot, which is a close up grouping of the same set of characters, he is sitting with his raincoat on and all done up. If I could spot that on what may be my first viewing (I may have seen this one back in the 1980s, I’m not sure) then I’m sure audiences back in 1946 seeing it on a much larger screen would have spotted that error as well. It’s a big one and I had to wind it back to make sure I hadn’t got confused with the characters and believe what I’d just seen. Such a shame.

And then, after an attempted murder in which Chan is saved from certain death by the birthday watch his son gave him stopping a bullet, the bus journey continues and the plot switches to the big city... which is a shame really.

Now then, this film is really not terrible and had me entertained throughout... but it did seem a little tired and lazy for a Charlie Chan mystery, to be sure. For instance, the identity of the killer, who I’m not about to reveal here, is someone who I was suspicious of throughout the whole movie and so it came as absolutely no surprise when the killer is finally revealed. Which is a shame because I was really hoping I was wrong and there are enough suspects in this one... at least at the start of the film... by the end they’ve kinda thinned out a bit due to either transforming themselves into allies of Charlie Chan or turning up on the receiving end of a bullet or knife blade.

The usual comedy shenanigans of Victor Sen Yung and Mantan Moreland are all present and correct, although in some sequences they are starting to get a little surreal and, in all the sequences, I’m afraid that they feel like exactly what they are... comedy padding to puff up the running time.

All the performances are fine, though, and if the script does seem very lacking at some points, it’s at least convoluted enough to keep the characters up to various pursuits... even if the identity of the killer seems to be more and more obvious as each fresh corpse turns up. The dialogue seems equally jaded, for this humble viewer, too... with the usual Chan aphorisms and retorts seeming a little less cute or charming and a far cry from the sparkling pearls of wisdom that had turned up in other films starring either Oland or Toler in the role.

All in all though, this is not a spectacularly dull film and the overall feel, while maybe not a solid, mystery thriller, is still one of “they don’t make movies like these anymore”... while at the same time begging the dubious question of... “But, should they?”

I am, however, very pleased that Warner Brothers have seen fit to release this Region 1 boxed set of four, previously unreleased on commercial DVD, Charlie Chan films, which includes this Toler film and three of the Roland Winters entries. I’ve only ever seen one of Winter’s films, in a previously released box set, so am looking forward to watching the three in here to see how well he does in comparison to his predecessors. Reviews of those three will be coming soon... watch this space.