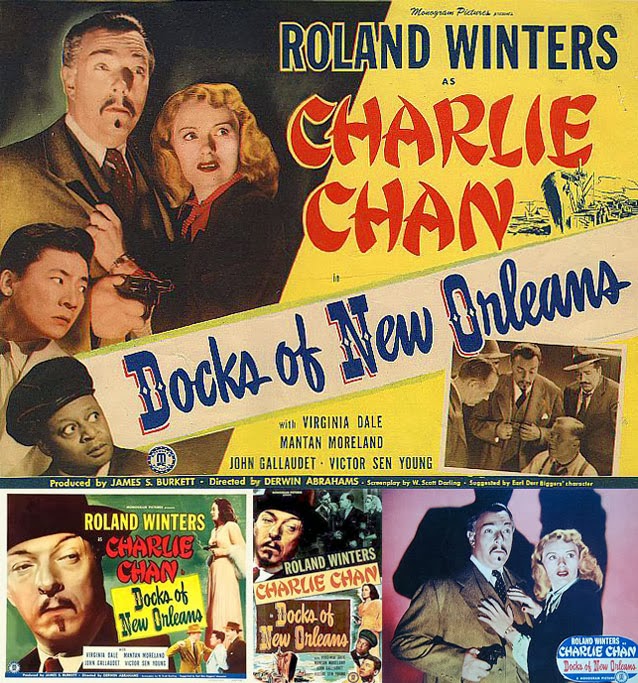 Okay, so Docks Of New Orleans is the second of Roland Winters' Charlie Chan films, made for Monogram after Fox had dropped the series a fair way into Sidnet Toler’s run. This is also only the second of the Winter’s films I’ve seen and so I’m still not all that familiar with this guy's way of playing the iconic role.

So I started watching this one and about 5 minutes in I’m getting strong feelings about it. For example, when one of the main characters goes into his office I said to myself... he’s not leaving that office alive. And I was right. And then I remembered how the murder was committed and I thought... wait a minute. I definitely haven’t seen this film before, have I?

Well I had and I hadn’t? Not only had I “kinda” seen it, it turns out that I “kinda” reviewed it on this blog too. This is a remake, it turns out, of one of the Boris Karloff Mr. Wong films... Mr. Wong, Detective, which I reviewed here. This is a less polished and even more sluggishly paced version of the same storyline and, if I didn’t know better (and I really don’t) then I’d say it was even shot on more or less the same redressed sets. Be interesting to find out if that was so.

Anyway, the murder weapons are not quite glass spheres in this one... they are actually glass radio tubes, which makes a little more sense. And the method of murder is still a brilliantly outrageous one. What happens is, when a certain pitch of note is played on a radio or instrument in the vicinity of a pre-planted radio tube, the glass shatters and releases a poison gas, instantly killing the occupant of the room near the radio. This is a particularly well staged murder in a scene (also, like many of them, found in the former Mr. Wong film) where a man is killed by the murderer pre-warning him of an attack by a letter. He is advised to lock himself in his study and not let anyone near him until police protection arrives. Of course, the victim does this and rings the police for help, thus summoning his own death when the pitch of the sound of the approaching police car shatters the glass tube and releases the poison gas. Maybe it’s a good definition of a poison pen letter?

The film is padded out with the usual routines of Victor Sen Yung as Number Two son (the name of the character played by this actor seems to change halfway through the series, for some reason) and Mantan Moreland continuing his Birmingham Brown role. Moreland even gets to do some of his two man stand up routine with another actor at one point in the film, but even this can’t liven up the proceedings that much and Tommy Chan and Brimingham Brown’s antics seem a little sedate and curtailed in this entry, compared to the comic heights they have sometimes reached in other entries in the series.

Roland Winters is kinda interesting as Chan... but perhaps not as suited to the role as his predecessors, it seems to me. He’s actually a quite good actor and he uses facial expressions well in the part. You can see his character thinking things through and reacting to things in a similar fashion, perhaps, to the way my favourite Charlie Chan, Warner Oland, performed the role. However, it has to be said that the performance is very slow paced and lethargically delivered. Many times I almost wanted to finish Winter’s lines for him because he seemed to be going so slowly.

The writing on this, also, is really not up to speed and I found the usual Chan aphorisms to be less amusing (read, less plain bonkers) than in previous films in the series. It’s hard to even pick them out as aphorisms in the dialogue to be honest... and that’s really a shame because it’s an essential signature of the Chan films and I’m sure Winters could have really got into the role if he was given more than these scripts to work with.

All in all, this is not too hot a Chan movie and I think I preferred the Mr. Wong version to this lukewarm remake. Still, it’s early days with the Winters' Chans for me and I look forward to seeing the next two films in this DVD set very soon.