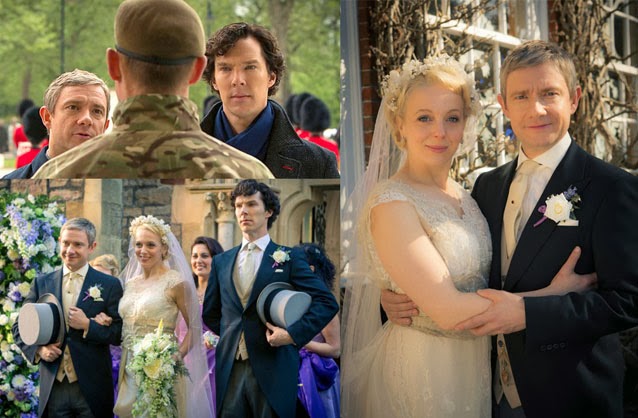 Warning: When you eliminate all the stuff from this article which wouldn’t, in any way, spoil the episode for you, what you’ll be left with, no matter how improbable, will be a big bunch of spoilers. Sorry.

Okay... so that was a little bit different then... and when I say a little bit different I actually mean this episode seems to have taken a heck of a lot of us out of our regular Sherlock comfort zone and sent us orbiting at a tenuous distance for a while, before bouncing back down to planet Baker Street again.

And it wasn’t a bad thing either.

Which is a relief, actually, considering the track record of the middle episodes in past two series. This one was very much though, a Sherlock murder mystery masquerading as something entirely different... swallowing up its cake aggressively while still managing, just about, to maintain it at the end for future edification.

That is to say... the mystery element which is part and parcel of a Sherlock Holmes adventure was certainly not approached in the most straightforward manner and this episode, focusing on the wedding of Dr. John Watson and Mary Morstan (played in the most accomplished manner possible, of course, by Martin Freeman and Amanda Abbington), was more a picture of the way Benedict Cumberbatch’s version of Holmes perceives the world and how he thinks that world perceives him... which is not entirely as he would have thought, I believe.

So, a character study... but masking a murder mystery which approached the main narrative focus in the form of both anecdotes and intrusions into that story flow, before it all came together at the end. Let’s look at the opening sequence, for example...

Rupert Graves carried the first five minutes of frustration and rage admirably, in a manner that may seem, at first, a little over the top but was actually completely appropriate to the broad strokes required for such a fast paced opening. While a return to the series of Vinette Robinson as Sergeant Sally Donovan helped give Graves’ Lestrade character the sense of community and camaraderie needed to pull off a sequence worthy of a predictable, but no less humorous for it, punchline. He basically gives up on a collar he has been waiting to make, jumping through various hurdles for a couple of years and, when that final goal is in his sights, he drops everything and leaves Donovan “holding the baby” as it were, so he can rush off and respond to an “urgent” text from Sherlock. He brings all the back up he can in the form of responding police units and, when he rushes to Baker Street to find that he is only required to help provide funny stories about Watson for Sherlock’s best man speech his reaction is perfect... but so is Sherlock’s as we realise that he didn’t anticipate Lestrade bringing the cavalry with him.

Later on, in a scene told in flashback, like the majority of the sequences comprising this episode, Holmes reaction to Watson approaching him to be his best man, since he counts him as his best friend, is complete silence because he is unprepared for that possibility. This re-enforces the idea made evident in that earlier scene, that Holmes has no idea that he is valued by his friends in this manner.

Which is interesting and, to be honest, the whole episode was done with a large amount of humour but I noticed there was a general trend to humanise and chip away at the personae of this incarnation of Holmes which, while I might find that kind of approach a novel and interesting thing to do with an episode at some part in the life of this television series, is something which I think may have best been held off until the production team had got a more sizeable amount of episodes under their belt.

Even the brilliant Mary plays off Holmes and Watson against each other, to get them back into the groove of working together and it’s clear that each of them think they are both “in on it” to help out the other one’s piece of mind... unusual for Holmes to fall for something so obvious I reckon. They were definitely hacking away at the old IQ points in this one I can tell you.

The flip side of that is, of course, that it was both brilliantly acted and, for the most part, this character study was beautifully executed in terms of the way various scenes and incoming pieces of data invaded the storyline in an often metaphorical fashion - a courtroom doubling up in Sherlock’s mind for a jury rigged, multi-Macbook chatroom in his living room, for example. And, although I personally found the drunk scenes to be a little long and over-wrought (many people loved these scenes, though, judging from the tweets) and, quite possibly, just kept in at this kind of length as padding, the use of the standard typographic overlays reduced to vague and mostly unhelpful observations was a brilliant way of getting the information across and maintaining the humour of the situation.

For the most part though, the episode was pretty cool and pretty watchable. Although I am souring a little towards Mycroft’s personae, it has to be said... and a little bit of experimental transitioning using split scene wipes back and forth like a 1960s movie on acid was, I thought, badly executed in the way it was used in this episode.

The music was customarily groovy, with some nice variations on the sub theme which seems to be the “real” leitmotif for Holmes and Watson in action. I did, however, notice that, like Doctor Who lately, there was a fair amount of old music from the show recycled and tracked in at various places. Which is a shame but, you know, TV is mostly done on the cheap in this country, despite what they charge for TV shows on DVD and Blu-Ray.

So... kinda looking forward to next weeks season finale but really hoping they eschew the cliffhanger ending for something with a little more closure to it this time around. And also hoping that they don’t kill off Louise Brealey’s character anytime soon, as I think she has a lot more to offer the writers in terms of character development rather than to just go out dying while saving Sherlock’s life or some such. We shall see what we shall see.