Paranormal Activity - The Marked Ones 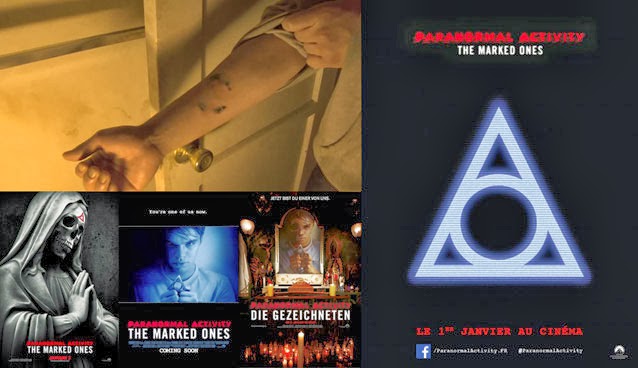 Warning: There will be some spoilers in here.

Okay... so if you’ve been reading my blog for a while you’ll probably know that I adore the Paranormal Activity films, at least the ones which were made in the USA... I’ve not been able to get a subtitled copy of the Japanese sequel to the original movie, Paranormal Activity 2: Tokyo Night due to, presumably, the Hollywood studios suppressing a release in English speaking countries (I can only, at time of writing this article, track down versions with Italian or French subtitles... so please let me know if you have any leads to picking up a decent, English subtitled DVD of the same).

Anyway, up until now, although I loved the first in the series... I always considered that movie to be the weakest of the films, not because it wasn’t any good - it was. It’s just that the first one wasn’t scary like the other ones turned out to be. However, now I’ve seen this installment, I’d have to say that this is now my least favourite of the series, not because it isn’t scary... it really is. Scary as hell. The usual high blood pressure and heart attack inducing shenanigans ensue, especially if you are going to see this in the company of a young, impressionable audience at the cinema. However... I did have some really big problems with this movie too.

My biggest problem, though, is that I didn’t sympathise with any of the main protagonists of the movie and, frankly, I didn’t care what happened to them. One of the two main guys is fresh from his College graduation and, frankly, I just assumed that a lot of his time before the spooky goings on were happening, and all through the film, would be about getting himself a job and becoming an upstanding, working citizen.

He and his friends are just, basically, thugs. Lazy teenagers who just seem to think its fine loafing around, acting goofy, playing mean pranks and doing nothing to help themselves. Seriously, this lot are worse than the kids in Attack the Block but, whereas in that film the issues inherent in the chemical make up of the so-called “heroes” was addressed at various times in the movie, here it’s just accepted that these are typical teenagers somehow... and presumably the film’s primary target audience of cinemagoing teenagers is supposed to identify with them. Lord help us if they do!

Another big problem is that the found footage style of film-making, which has served the series so well right from the start of the franchise (before they even figured out this would be scary, cheap and profitable enough to be a franchise) is adhered to as it should be... but with absolutely no apparent reason for this to be the case. Seriously, at least the other films in the franchise made a passable effort to justify the use of found footage media. Using surveillance cameras and switching to different sources to build a picture where the use of video of camera equipment would be justified. Here the main protagonists don’t even have a camera fetish like a couple of the characters in the past films. Here they just seem to be intent on recording stuff when they obviously are not interested in the camera in the slightest and will even remember to pick up the camera when they are running for their lives.

Seriously? The producers expect us to believe this?

The actions by various characters in this film defy credibility and that means I didn’t buy into it the way I would in a film where that layer of super-realism was deliberately used. I would have thought this is something the film-makers would have realised. The [REC] films abandoned this style a little way in to the third entry in that series and, although I didn’t agree with that departure from the format myself, if the writers couldn’t have written what they wanted to show credibly within that found footage format then you can see why they decided to rid themselves of those shackles. Paranormal Activity: The Marked Ones is a good film to use as an example of why you wouldn’t continue with that format if you can’t write convincingly for it.

There are some good moments in this one though. The scenes where the old hand held electronic game Simon, which was popular for a year or two in the late 1970s, is used as a variation of a ouija board, is fun but, this also brings problems of its own. If this film is aimed at teenagers, and I’m pretty sure it is, they’re probably not going to remember an old toy which was briefly popular nearly 40 years ago. So... nice idea but maybe a little too low tech for the teenage audience Hollywood producers tend to target.

There are also a fair few cameos from previous episodes in the series, which is nice, including the surviving daughter from Paranormal Activity 2 and, most interestingly, Katie (a regular character in all the US installments in the franchise) and Micah, her husband who was killed at the end of the first film.

Well, if you’re paying attention during one of the “young thugs doing research” sequences of this one, you will hear references to time travel, when talking about the demon spirits and, presumably, the witch army we have seen the coven recruiting for in previous episodes. And, yeah, there’s a sequence right at the end of this one which dovetails straight into the first movie, via time travel. And I have to say that this is the tackiest writing choice I have seen in the franchise. Also a self defeating one because, if you’re building a demon army, you might as well do it in the past and there you go, it’s already done before you know it. Yeah, I know. First born sons etc need to be waited for... but then they can be whisked back in time and still exist then, I would guess... whether they were born or not. In fact, if that’s the case then the demons already know the outcome of their work, surely? It’s all very confusing and I think this element is something which is going to trip the franchise up later on down the line. But they’ve committed to it now so there’s not much anyone can do about it. Kind of a hard element to overlook in the grand scheme of things.

And that’s about it as far as Paranormal Activity: The Marked Ones goes. As you would expect, the film is well acted by all the performers. Yes, acting really unsympathetically most of the time but at least you can kinda believe in them. I do think the franchise has taken a bad step with this one though. Of course, if you’re into these films, you really do need to see this one as it’s another jigsaw piece of the overall story... but I’m hoping the next one is better than this mess of a movie. The first “not so good” entry in the series.
Posted by NUTS4R2 at 19:52