Bones Of The Lost 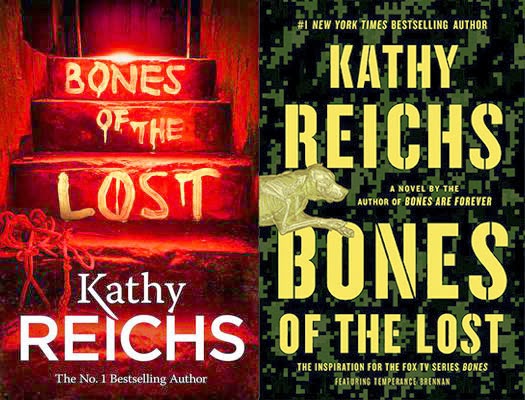 Keeping Up With The Bones

And so, as I do every year, I come to my second big Christmas ritual. The day after I finish my annual read of the new Patricia Cornwell novel, I start the latest of Kathy Reichs’ Temperance Brennan novels. It’s funny, but both these two writers have gone through bad patches, at least in my appreciation of some of their books, but both are back on form... so it kinda feels like old times.

I started reading Kathy Reichs several years after I was already reading Cornwell’s Scarpetta novels and both writers seem to have changed somewhat over the years. That is to say, their writing style and plotting has mellowed and matured. Cornwell has gone for much more intense (well she was always kinda intense), smaller chamber concertos of plots with the action taking place in a relatively small area and lasting just a day or two in fictional time... even a few hours or so in one book, if memory serves me correctly. Reichs is still plotting long and intricate things which takes her character from location to location like a female James Bond.

Either way is valid and the way that Reichs has matured, and which is in evidence once again here, is that her comedy writing and dialogue, and especially her character’s inner dialogue (the books are written in first person), is getting more and more entertaining and gives the novels a big shot of humour in contrast to the grim crimes her character becomes involved in. This is an unlikely combination sometimes, especially when she’s exploring the more sensitive heart of her character, but it seems to work really well and is one of her greatest strengths.

While I found this one extremely entertaining and relatively unputdownable (there’s a reason why her latest book is always on my Christmas list), I did find the plotting, like some of her other recent ones, to be fairly obvious and free of surprises at a lot of key points. One of the reasons I think this is the case is because every little element of the plot down to the characters is important to the main thrust of things. For example, when Brennan’s character is talking about her daughter Kate having enlisted in the army, you know some incredible coincidence will have her flying out to join her and, unsurprisingly, it all just happens to connect to the case she is working back home.

I think one of the reasons these particular novels may be playing out like this at the moment is because she is maybe used to reading the teleplays or watching the TV show which includes a variant of her Temperance Brennan character. The show is called Bones and I tried to watch a couple of episodes once but the Tempe of the TV show seems to be a very pale, cheerless and emotionally immature version of the one in her original novels. However, things have to connect more directly for an audience to be able to understand things in a movie or a TV show... or at least that’s the way the Hollywood community seems to practice their craft. So maybe the all too easy “join the dots” connections in this story are a hangover from the “cause and effect” tactic used in modern screenwriting at the moment. Who knows?

What I do know is, predictable or not, this had a lot of the ingredients I need for a really good read. Fast pacing, great character interaction and relationships, generous amounts of humour, some beautiful observations about the harsh realities of some corners of life I’ll never get to see (hopefully) and, above all, a living beating sense of heart which allows you to connect to the writer through the way she weaves her words and the attitudes towards life she displays in her work, consciously or unconsciously.

I don’t have much more to say about this one other than the fact that one of my favourite characters is absent from most of the book and when he does turn up, haunted by a large dose of bad news, it’s not the same incarnation of the character as we knew him. Something has changed for that character and, indeed, the knock on effect is that things may be changing for the novels' central heroine at some point soon. Maybe too early to tell as yet but I’ll certainly be looking forward to next Christmas when I get to read the next one. Fans of this writer shouldn’t be too disappointed with this one, I think.