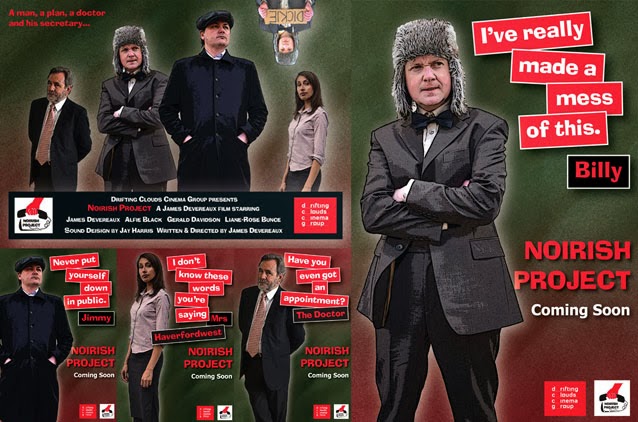 Clarification Disclaimer: Please note that, while I freely gave my time and costs to Noirish Project, I produced three campaigns (60s UK/US, Italian 70s and modern) and a couple of early teaser pieces only... comprising around 30 finished designs (and generating hundreds of files). I also designed one set of title cards and a “video on demand” header. Since my work on the project, other factors have come into play and, as far as  know, my artwork is now not being used. I don’t know whether my title cards are still in the film but I would guess/hope not since that would, obviously, further dilute the brand strength of the movie in relation to the poster campaigns. I am clarifying this here, not so much as to distance myself from the project but to firmly establish to any future collaborators who require my expertise in design matters that some of the stuff surrounding the project has not been produced by me and therefore the quality and consistency of the layout and typography on certain pieces should not be mistaken for my own. I actually have a degree in graphic design and over a quarter of a century in the field, so I’m not in the habit of making any typographic mistakes or poor judgemental decisions within the realm of my work unless insisted on by a client. So please don’t judge me by some of the  stuff you may have seen surrounding this project as I may well not be guilty. I wish James Devereaux every success with this and future projects and, as always, I hope you enjoy his unique spin in his work.

Noirish Project is a movie by actor/writer/director James Devereaux which you might have been hearing about on the internet for a while. It was a project I first got caught up in last year when I was invited to produce a poster campaign for it, which kinda snowballed into three (see here) and also got me on board with designing the static title cards for the film itself. So I was pleased to, just recently, be able to see an internet preview of the movie and to see how the film lived up to my expectations of it.

Following two credit cards, the film starts off with a long, static establishing, almost panoramic shot of the city of London with a train pulling in from left of shot to right and slowing down to make way for another coming in from the opposite direction before travelling on its way. Knowing the director’s concerns and previous history in the arena of short films, somewhat, even before the shot had finished, I immediately took this as a metaphor for the way people approach each other, fail to communicate and then pass each other by. So, yeah, that first opening shot is kinda representative of the whole movie in a way.

The film then starts proper with what I can only describe as a “slow chase” or trail sequence which sets the tone for the movie quite accurately, as it’s kind of like watching a muffled urban road movie punctuated by the odd, sobering contrasts of absurdist humour stabbing out from the dialogue’s inescapable bursts of human non-connection as played by the two skillful lead actors of the piece - Alfie Black as Billy and James Devereaux himself as Jimmy. This non-communication is aggravated or exasperated by the fact that it’s fairly obvious from the start, and made implicit by the end of the movie, that one character is "playing" the other throughout the course of the film.

However, the intent and inherent contradiction of one of the characters at the basic level of story, serves the bigger picture in this case. Devereaux’s films are not about story. Story is, for the most part in his works, at least the ones I’ve seen so far, a necessary evil which needs to be served at ground zero in order to get you to see the real movie and what it’s about. In this particular case, the strong humour and plot device of the recovery of some paste pearls are the window dressing and the shelving for a study of two people who are dislocated from each other, basically pointing out the alienation which is part and parcel of everyday living in the 21st century.

For example, that slow trail sequence at the opening of the film, which dislocates you a little in its construction, followed by a shot where the old 180 degree rule is nicely broken in such a way that you are left on a shot of two park benches with James and Alfie entering from screen right (instead of left, where you'd expect to see them coming from), serves to re-enforce this sense of disengagement by disorienting the viewer somewhat in the way the movie is decoded.

Many of the shots in this movie are very well designed but even they serve to back up this overview of general disruption. A shot of Billy and Jimmy standing against a wall with windows, for example, is well chosen since Jimmy’s shoulders are precisely aligned with where the texture of the wall ends and the windows begin. This leaves the head of his character and, to a lesser extent but certainly in contrast to this, that of Billy, existing in split sections of the frame, sectioning off the characters in multiple planes within the same space.

Yet another shot, splits planes horizontally towards the camera as a character walks towards a pub in the background and we suddenly realise there are cars going past him between us and the camera and, again, more in front of him. This sudden chopping up of the perceived reality of the situation by displacing the casual viewer in space seems to be a constant theme throughout the movie, and this is aided immensely by both the writing and the performance, as the rightly suspicious Billy is bamboozled throughout the film’s running length.

Other examples of the visual fractures would be a long sequence where everything is slightly out of focus or the fact that a close up or series of close-ups will appear before any kind of establishing shots in certain sequences, a psychological trick I first saw used in a 1960s movie in an effort to prime the audience for a certain mindset but which is used more overtly here as a way of transitioning with a kind of jagged and brisk cut. This transition of contrast is something which occurs again and again throughout the movie and is equally reenforced by the different sound designs for each section, rubbing against each other in the mix.

The film incudes a minimum of characters but the appearances of Gerald Davidson and The Doctor and the always lovely Liane Rose-Bunce as Miss Haverford West in a scene which plays out in terms of indifference, aggression and ultimately absurd and over the top humour, is a welcome one and helps propel the story, such as it is, back into the realm of the two hander and into the true interests of the writer.

That’s probably as much as I want to say about this project at this point. One, because I don’t want to spoil it for you and, two, because I’m possibly too close to the project to want to get too involved with it as a reviewer. What I can say, though, is that the film continues to see the development of Devereaux as a writer/director who seems to be developing his unique visual language in a progressive fashion with each project I see him complete. If you get the chance to see this film then I would urge you to go take a look as it captures the essence of British zero budget film-making as it is at present in an interesting and, more importantly, endearing way. For more details, see the Norish Project web site here... http://noirishproject.wordpress.com/
Posted by NUTS4R2 at 18:29