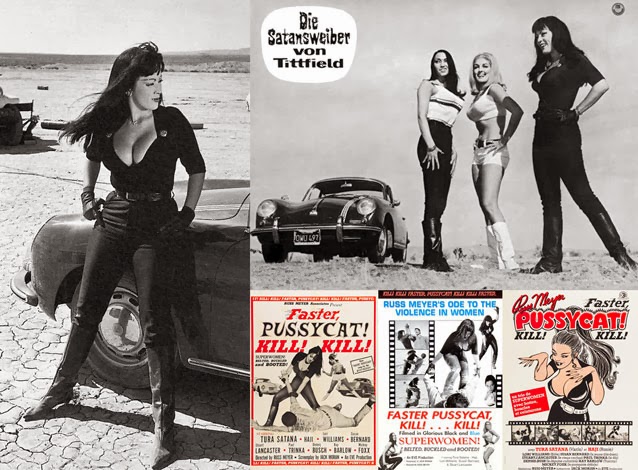 I have, however, had a lot of people telling me to see this one in particular over the decades.

I don’t know much about Meyer, it’s true. I know that he tends to cast women by the size of their more obvious attributes and that’s about it. However, the fact that I’ve seen the poster for this movie on so many old Scala and Everyman Hampstead double bill posters in days of old, not to mention the fact of seeing the poster emblazoned on t-shirts and selling postcards for many years, meant I probably should have gotten around to seeing this at some point before I died.

Well, the time was right and, with an uncut version from Arrow films (not that I could see what there was to actually cut out of it, to be honest), I grabbed myself a copy, along with another film called Bitch Slap, which looked to me like a modern homage to this movie. I didn’t yet know whether that was true or not, since I’d never seen either when I picked both of these up but, hey, it was cheap too.

This movie is both a lot less and a lot more than I was expecting, considering it’s reputation. A lot less because it is fairly skillfully put together without seeming to have much of anything to say. A lot more because, for a film which relies so heavily on three female antagonists played by Tura Satana, Haji and Lori Williams... the script and direction is such that it plays to the strengths of these three giant size personalities and they tend to make their mark in kind of an iconic way.

The film starts on a movie sound strip with voice-over dialogue warning us of the dangers of the new breed of killer... the female... walking the streets and, as the voice continues on in this vein, the sound strips multiply until you have a whole screen full of visual sound. Then the movie starts properly and begins with three go-go dancers who, when their shift ends, tear up the desert in their cars as part of a cleavage popping posse of petty rivalry and antagonism made flesh. All in slick black and white, which of course lends the visuals a certain potent character, feeding into the iconography of the movie... which the director is only too happy to take advantage of.

The script is salty and sexual and when the three girl’s leader goes a bit mental and kills an innocent guy, kidnapping his equally buxom girlfriend before getting into a scheme to rob a sadistic cripple and his two sons out of their fortune... more aggressive shenanigans ensue.

This is all done to a mental soundtrack which is accredited to B-movie maven’s Sawtell and Shefter, but which I’m assuming is purely tracked in needle-drop style from their back catalogue. Which is fair enough, I suppose, since that was a traditional way of putting together these kinds of composer’s soundtracks back in the day. Meyer’s choice of musical styles is not always on the money and it gets downright hysterical in some sequences where obvious overstatement on, say, a comedic effect is required and easily supplied (possibly to the detriment of the movie, although there’s a lot to be said for the “OMG” effect in this motion picture, to be sure).

All in all, the film was shot and presented at such a laid back pace that I found myself quickly transported to another reality. It’s a mid sixties movie but the vibe on it, for me anyway, was pure fifties and the musical styes used during the racing scenes at the start, for example, tend to push that tempo, although I suspect it wasn’t a deliberate decision at the time, is my guess.

I honestly couldn’t find a whole lot in this movie that I could put my finger on and hold up in the light and say, this film is wonderful because "look here"... but it does have a certain something to it, quite apart from the obvious eye candy and a very sharpened sense of unbelievably but probably intentionally over the top dialogue style. It does, though, have Tura Satana as the main villainess of the piece and, despite the fact that her actions are mostly contemptible throughout the course of the movie, she has a certain larger than life aura around her which makes her fascinating to watch. You won’t be able to take your eyes off her when she’s on screen, as she weaves a hypnotic spell swinging like a pendulum between alluring and angry.

Honestly, the closest thing I could compare this to in tone, if you’ve ever seen anything like them, is the girl gang genre which was coming out of studios like Nikkatsu and its nearest competitors in the sixties. I’m talking about the youth oriented arm of the “pinky violence” movies the Japanese were churning out like Delinquent Girl Boss: Worthless To Confess, Girl Boss Guerilla and the likes of the Stray Cat Rock movies such as Stray Cat Rock: Sex Hunter. The only real differences being that the innate sense of honour and code with which the gang members in these kinds of movies bond is non-existent in Meyer’s own ode to women of violence... and of course, the size of the various actresses bosoms, which is an interesting obsession to have in and of itself, I’m guessing.

So, okay. The tone is similar to those and it moves along at its own pace. I’ve got nothing to really recommend this one with because I just can’t quite pinpoint why I liked it, but it’s certainly got a sense of style and if I saw more of this guys movies I suspect I’d begin to be able to narrow down just what box of tricks the director is using to draw your eyes into the frame. Certainly there are a lot of almost over composed, low angle shots which make for instant and iconic still photographs if torn away from the context of the motion picture they are a part of. Maybe it’s that element of the films technical make up which kept me from having a bad time with this movie. Nevertheless, with all that said, I’m still going to recommend this movie because it’s not without it’s charm and Tura Satana (who unfortunately ended up in movies like Astro Zombies, reviewed here ) seems to be one of those deadlier than the male members of her species who most people might find fascinating. Don’t necessarily go out of your way either but, if you see these pussycats speeding fast within your radar, it might be worth some of your time to check them out. They might set your motor purring.