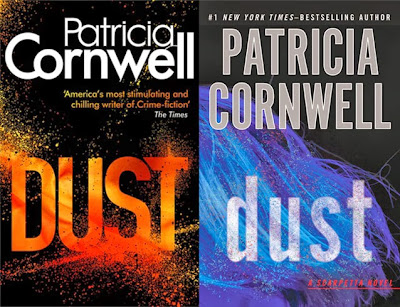 And so, as I have been doing every year for the past 20 plus years of my life, I come to the first of my annual Christmas rituals. Sometime early on in the Christmas holiday, preferably on the 25th December, the same day I unwrap this annual present from my parents, I crack open Patricia Cornwell’s latest Scarpetta novel and find out how some of my favourite characters are doing...

Marino, Benton, Lucy Farinelli (my absolute favourite) and of course, Dr. Scarpetta herself.

And they’re all here present and correct and, I’m happy to say, in fairly equal measure in this one - sometimes the odd character doesn’t turn up so much due to how appropriate they are to the story but this one has them all.

Now I had a bad patch with some of Cornwell’s Scarpetta novels a little while back. I didn’t mind that she switched from 1st person to 3rd person narrative so much (although that left me fearful for Scarpetta’s life... it’s harder to kill your main character off when you’re seeing it through that person’s eyes) as the fact that some of the books seemed just, I dunno, less well written than the ones I used to read of old. If you’ve been reading my annual reviews of her books this last three or four years, you’ll also know that she’s won me back over time... her latest batch of novels have been absolutely as good as anything she’s written before and Dust is no exception to this rule.

This one continues with her return to first person narrative and, what that does, is keep you on your guard and on edge in a different way. You know pretty much from the early chapters of the novel that there is a killer afoot and that Scarpetta thinks she is being watched. I’m not going to give anything away but, since you know her unseen adversary is in the background, when characters such as the aforementioned regulars in the series leave the view of “Scarpetta’s eyes” in the story to check things out in a different location... you are instantly worried that Cornwell’s going to kill a regular off while Scarpetta is still just getting started at the main crime scenes.

Like a fair few of her later works, in terms of the scale of the story, Dust is a chamber concerto rather than a full blown orchestral symphony of crime... which I know she is also more than capable of from her earlier books. However, this doesn’t make the details and the suspense of the story any less compelling. In fact, like a lot of artistic disciplines, concentrating on a limited palette in terms of time and location, as this one does (the majority of the book takes place in around a 24 hour period), the focus on the heart of the main attraction is made all the more intense and potent from it. As any reader of Cornwell’s creations will probably concur, with Scarpetta it’s all in the details and the details are made all the more interesting by the political and criminal machinations which touch on the Scarpetta family at a close personal level... I really don’t want to say too much and spoil it here so, please forgive me if I seem a little cryptic in my description.

I guess what I’m trying to say is that the plot is, as usual for this writer and her characters, fraught with peril but the slowed down time frame means you can spend time with the characters and share their feelings and personal agendas in a way that you might not have the luxury to do in a globe-trotting caper. The characters are such rich characters to work with anyway, that I felt relieved that Cornwell was able to pass the time with them... as observed by her eagle eyed Dr. Kay Scarpetta incarnation. Although, I would love to see a Lucy Farinelli series of books at some point, truth be told.

As the story slowly progresses and you slowly begin to realise the political ramifications and potential threat to characters who are dear to your heart, the more you will speed through the novel at a rate of knotts. It’s another page turner from Cornwell who does her best to keep you leafing through those pages in the most entertaining and enlightening manner possible as you rush towards the final solution. A solution, in this case, which is more about villains than murderers, in many ways, but I won’t explain that one either... you’ll just have to read it.

There was one strange chapter or flashback early on in the novel to a conversation between Scarpetta and Marino, many years in the past, which puzzled me a little and it felt a bit like using a sledge hammer to crack a walnut when it came to the emotional point she was making... but then again I’ve no idea if she’s building up to something for a future novel so lets see how that goes. She does that sometimes, I’ve noticed, although the little interview material and the tweets I’ve seen her make suggest that these seemingly engineered moments may, in fact, be a subconscious manifestation in terms of the way she seems to picture her style of writing. It doesn’t matter though... I’m sure it will either manifest itself or not and I look forward to her work, as always, as one of the most fulfilling annual rituals I indulge in.

If you’ve never read a Scarpetta novel before, then Dust actually isn’t a bad jumping on point as she makes the relationships between the various characters quite clear throughout the novel for first time readers... although personally, since the characters don’t stay the same and do progress and grow throughout the series, I would still point you back to her earlier novels and recommend you read them in order if you want to get “the full Scarpetta” effect. Either way, I’d recommend you get yourself to a point at Christmas where you can get a healthy dose of “me time”, prepare some cheese and crackers, pour yourself a glass of port or sherry, and crack open a Scarpetta novel. Always a good piece of advice, I reckon.