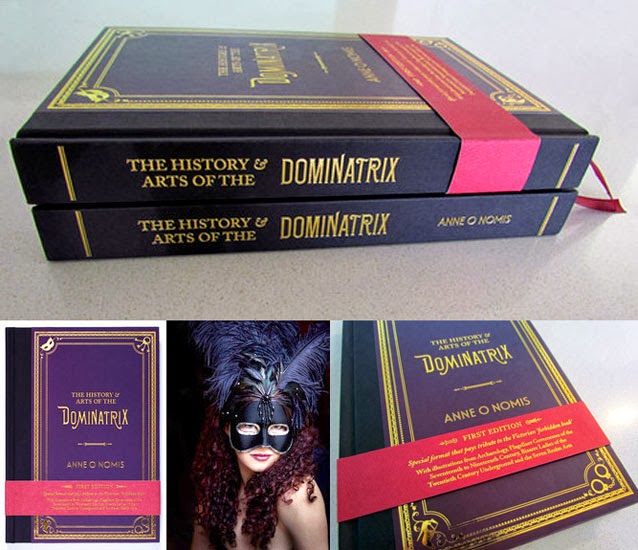 She didn’t know it at the time and she’s never been much inclined to acknowledge that fact... but I think that, in itself, says a lot of good things about her character. That’s an anecdote for another time, though, and this certainly isn’t the place to tell that story. The reason I even bring it up is because it left me with a certain amount of respect and affection for both the woman and the trade in which she worked. A world which even now still exists in the shadows somewhat, while simultaneously having the most exposure due to the global internet community than it’s ever had before.

My curiosity for this book was initially piqued by a stray retweet of the author on Twitter and, when I read up on it and saw the hefty £48 plus postage and packing price tag, I have to admit that I was less than happy about the cost. Having said that though, there are lots of books out there priced similarly these days but, usually, they rarely do what is claimed in their blurb. This book, to be honest, sounded a little too good to be true...

However, it’s my great pleasure to report that, quite surprisingly, it actually does do what it says on the tin... or in this case, it does what it says in the gold embossed letters of this absolutely beautifully bound and designed book (designed by Anna Egan-Reid) and printed in its interior on a beautiful paper stock. It’s rare but, in this case, you can invest a certain amount of belief in what I thought was the writer's initial hyperbole. The design is reportedly influenced by, to a certain extent, a rare tome called 'Index Librorum Prohibitorum', or 'Index of Forbidden Books' (1877) which was put together by Victorian 'erotomaniac' Henry Spencer Ashbee.

The book starts off with a brilliant introduction by the author, clearly stating her intentions and relating the events, tragedies and serendipity which brought her to write about a subject which has obviously become one of her passions over the years. That really comes out in the enthusiasm behind the writing and even from the intro, I was literally hooked.

This first section also alludes to such things as the use of jewellery and make up being used as the powerful and alluring war paint of the female dominant... so nothing changes there then in terms of modern day usage of this stuff by the average woman, it seems to me. Also, there’s some emphasis that images of sexual Goddesses in ancient times, found in sculpture or other historical artefacts, are depicted using exactly the same kinds of poses and visual language found in photographs and illustrative content used to depict or promote the modern dominant in recent and modern media such as telephone box cards, magazines and websites. This is very much a book about the relevance of history to the contemporary world.

The second chapter jumps a bit in time, seemingly due to a total lack of ‘known’ documentation about the subject, until it catches up to the next reported “sightings” of the dominatrix in history, around about the late sixteenth century, and touches on such interesting connective strings as Sir Francis Dashwood and his infamous Hellfire Club (I believe Alastair Crowley was a member of this at one point) while also addressing, tangentially, some personal theories I have on the nature of this level and variation of sexual play... but I won't subject the reader here to my own conclusions surrounding this subject.

This chapter/section also includes the notorious ‘governess’ Theresa Berkley, who invented, among other torture devices, The Berkley Horse. She was certainly a high profile professional dominant in the 19th Century and, although it doesn’t mention this in the book, she was supposed to be the real life inspiration for the Rosa Coote character in the infamous Victorian ‘underground’ magazine The Pearl. It was specifically the likely inclusion of Theresa Berkley in The History & Arts Of The Dominatrix which was the clincher in me taking the plunge in investing in this rich tome, for reasons which are probably best left unclear in this blog.

Another section is devoted to the practice of ‘staged’ scenes of the dominatrix and the importance of certain product crafted in the very early twentieth century of French fetish photography using Parisian prostitutes as models. The wife of one such French fetish photography giant, evolving from the natural progression of their lingerie and costume making business, was called Nativa and, by all accounts, her fetish fashion sense would be drawn on a lot by today’s designers. Personally, I couldn’t imagine certain Madonna videos from the past, for instance, without thinking of the influences of some of these people and their costumes (Studded cone bra, steel knickers etc) and the poses they crafted, very much birthing from the same instincts that those images of sexual Goddesses were being depicted in, who we heard about in the first chapter. Ms. Nomis makes an extraordinarily convincing case of the connective tissue from one era to the next in her writing and, though much of it could, perhaps, be observed and concluded quite easily with access to the same material, it is the writer's light shining on the material and putting in the research and investigation which uncovers and illuminates it for the reader.

The next bus stop on the journey through this colourful history (and all colourfully illustrated with licensed imagery throughout) is the dominant women of the 1950s and 1960s and, although the specific lady I wanted to know about from this era wasn’t included, as far as I can see (I’m getting old and have actually forgotten her name but I’d know it if I saw it... don’t judge me too harshly, I’m in my forties now), I have to say that I continued to learn a lot from this section.

I was particularly impressed with the author’s assertion that censorship tends to attack the truth and thus, flags up and maybe even enables the censored articles (books, flyers, cards, movies etc) with a certain place of power over and above other manifestations in these kinds of media. Which rang very true to my views, I have to say.

And that about wraps this review up. In terms of the actual book as an object, it’s well worth the investment of the cost of it and, if the beautiful binding (and the bound in cloth bookmark... I’m a sucker for books with those!) is not enough to sway you, then I would say that, when coupled with the amazing wealth of interesting information unveiled in this volume, well... if you have any interest at all in the discipline and historical heritage and its importance to the art of the dominatrix, you really might want to check this one out and pick up one of the numbered, limited editions of the first edition while you still can. I count this as one of the 5 or 10 most beautifully put together books I own and if you’re a lover of a nicely bound and well written tome, then you should grab one soonest.

For more details of how to get yourself a copy of the book and to learn a little more about the writer, check out her own website here... http://historyofthedominatrix.com/