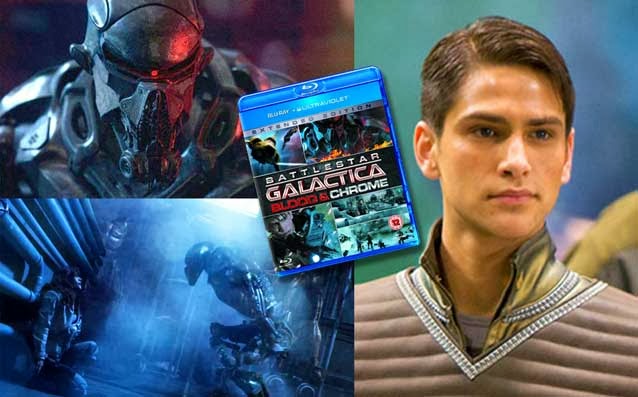 So here I am finally watching the Battlestar Galactica spin off Blood And Chrome, which is set somewhere in between the regular rebooted Battlestar Galactica TV show and the prequel series Caprica. This hour and a half movie tells the story of young William Adama’s very first mission in the first Cylon war and is pretty much setting things up for a regular series which, I guess, never got made. And that’s a shame because, like the BSG reboot, this prequel is absolutely brilliant, for the most part.

Young Adama is not played, however, by the guy who played him in the flashback sequences in the TV movie Battlestar Galactica: Razor (which is a missed opportunity because that kinda screws continuity a little) but by Luke Pasqualino, who is currently playing D’Artagnan in the new BBC drama of The Three Musketeers, apparently. At first I wasn’t sure about this guy... he looks to young and naive to grow up to be Edward James Olmos... but the dialogue in the script provided for that character is pretty kick-ass and it only took me a few minutes to start believing in this version of Adama.

The movie opens strong with a Colonial Viper VS Cylon fighter sequence in which young Adama ejects his cockpit glass after it gets battered in order to see the next kill and bravely risks death by radiation poisoning as he takes out an enemy by flying upside down over it and shooting the ship down from his exposed cockpit with a hand pistol. All is okay though, as it turns out this opening is a sly reference to the old Kobayashi Maru test taken by Starfleet Cadets in the 1982 movie Star Trek II: The Wrath Of Khan (and also the rebooted Star Trek movie from 2009, of course).

This is followed by a display of Adama’s cockiness, a scene showing the reaction of his future crew mates (if a series was ever commissioned) to his arrogance and, also, a naked unisex shower scene... which was kinda interesting for a BSG story (and somewhat welcome too).

And then we get to the milk run mission which turns out to actually be a hush-hush secret mission to rendezvous with a team on an ice planet for something special. Yeah, that’s right. Half an hour in and this movie is suddenly shaping up to be an homage, at least in theme, to the old Gun On Ice Planet Zero episodes of the original 1978 Battlestar Galactica TV show which, if anyone remembers it (the novelisation was called Battlestar Galactica 2: The Cylon Death Machine) was actually a science-fiction remake of The Guns Of Navarone. Now, what we get here is not quite that... but it has some very similar highlighting to it and it was pretty obvious, especially when a sex scene is introduced at a point into the narrative, that nothing about the mission is quite what it seems and there’s going to be some heavy betrayal coming up at some point towards the finale of the story. And that’s quite correct, as it turns out.

The acting in this one is all fine and the script is good. The dialogue is pretty cool for a lot of the time although it does have its more “soap opera hysteria” moments at a few points. The mise-en-scene is pretty much the same as the rebooted Battlestar Galactica TV series, with the camera wandering around a scene and then reacting to things as it follows and highlights by pan, zoom or refocus when something happens to “surprise” it. They do this very well in this show and it’s one of the few shows/movies (Firefly was another) where this method of “reaction camera” really works well, I think.

Two more things on top of this ensure you are going to have a really good ride with Blood And Chrome...

One is the usual spectacle of the special effects sequences, especially with those ariel battles still following this kind of camera methodology throughout. The fast paced action and editing (which misses nothing and is not confusing at all) is coupled with some kick ass sound design and really pulls it all together into something which you wouldn’t have been able to imagine ever being affordable on TV even ten years ago. It’s an awesome array of visual and aural spectacle.

And talking of the aural element... the other big thing about this is exactly what you would expect it to be in the Battlestar Galactica franchise. Bear McCreary’s unbelievably cool, heavy percussion mixed with ethnic vocal melody scoring, which absolutely supports the on-screen visuals and enhances them so that you’re toe tapping as you watch the electric death carnage unleashed on screen. Um... yeah, there’s subtle stuff too, of course... McCreary’s a kick ass composer... but I really like all that electric death carnage music a lot, you know? There was an album release of this score and it’s absolutely fantastic. The end credits, which takes the Apocalypse theme with new lyrics in English by McCreary’s wife Raya Yarbrough, is an absolute joy to listen to, too.

And that’s about it. If you’re a fan of the regular rebooted series, even though none of the regular cast are in this (asides from a brief appearance from the Galactica in its heyday, of course, and the voice of Tricia Helfer as an early version of Six), then you’ll love this addition to the BSG universe. It’s probably not a bad jumping on point either since, unlike some of the stories set in the past of the show, it gives away none of the many twists of the regular series in it. Definitely a strong recommendation on all counts.

So say we all.