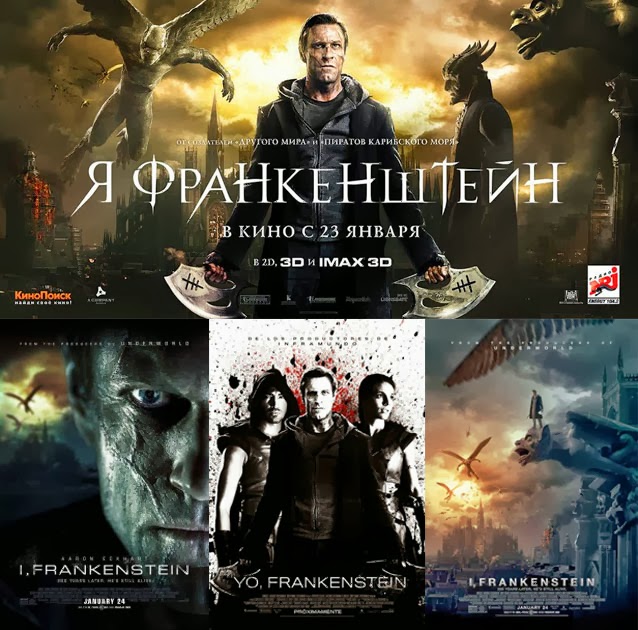 Mary Shelley’s famous creation has had a lot of make-overs and facelifts over the nearly 200 years since she penned the original Frankenstein novel and its subsequent revisions and variations (published not long after the original version and revised by Shelley herself). The comic book on which this movie is based, I, Frankenstein, is not one I’ve read but I’m more than familiar with the concept of the Frankenstein monster surviving for decades and becoming embroiled in various adventures involving raising an army or tapped in service to another cause etc... a concept which has been done many times in books and which I read at least one variation of almost every year in the annual Tales Of The Shadowmen volumes.

Being as I was unfamiliar with the specific source material for this adaptation, you might wonder why I was so looking forward to seeing this one.... especially after a fairly uninspiring trailer? Well, two reasons actually...

One is that I really think Aaron Eckhart is one of the great, modern actors. Very underrated and someone who I feel is more than talented enough to be able to carry a movie on his own, if needed. I wanted to see how he performed in the iconic role of the Frankenstein monster and, having now seen that performance, all I can say is he acquitted himself very well with a script that, to be fair, could have been a lot better. He plays this role as convincingly and seriously as he does all his others and you really do have to admire this geezah.

The other reason I wanted to see this is because there’s a line in a trailer which is an iconic reference to the old Hammer film studio. The Gargoyle Queen (yeah, really, don’t ask) proclaims on the promo, “Frankenstein must be destroyed!” Frankenstein Must Be Destroyed was, of course, the fifth in the Hammer Films Frankenstein series, starring Peter Cushing as the titular scientist, from 1969. This got me interested because I thought this film would be a post-modernistic, eclectic ride through the history of the Frankenstein monster in film... alas, I was wrong.

Although the film does contain a fair few audio and visual references to a couple of the 1930s Universal incarnations of the character, this is pretty much the only real nods on show (as far as I could make out) and the Hammer line doesn’t seem to be in the actual film proper. Either an alternate version of the scene was used or quite possibly, two different sound bites were used to create the dialogue in the trailer... either way, it’s not in there and that’s a shame because I was waiting to hear this iconic line throughout the course of the whole picture.

There I was, sitting in the cinema with my 3D glasses on, drumming my fingers all through the movie, thinking to myself... she’s going to say it soon. Any minute now. She’s going to say it... and then the credits rolled. Which says something very basic about my experience of the movie as a whole I think... the fact that the on screen shenanigans weren’t enough to distract me from the anticipation in the sound bite on the trailer probably speaks volumes.

Now, it’s not a terrible movie by a long shot. Most of the performances are good and the mise-en-scene during certain parts of the movie does shine, usually noticeable when there’s less CGI on display... which is unfortunately often the case in an effects heavy film like this. The music is serviceable and the action choreography, while not brilliant, is as competent as the rest of the thing. But the film does feel rather flat and I wasn’t really that invested in any of the characters in the piece. I think the thing that really lets it down is the writing...

The film is mostly set in the present and we’re expected to believe in a world where stone gargoyle angels battle demonic forces and the death of either of the species send them either returning to heaven (in the case of the ludicrously silly looking gargoyles) or back to hell. The world is just something we’re expected to believe in without any real set-up or stakes and, frankly, the whole thing feels ridiculous. People behave in ways which display a lack of intelligence and a blinding acceptance of things as they are and even the little details like the creation of the monster via current supplied by electrical eels seems a little off when you consider the creation scene in the original novel which, if I remember correctly (it’s been many decades since I read it), doesn’t once mention the harnessing of electrical current in relation to the creation of the monster. Yeah, okay, we can only blame iconic Universal horror versions of the thirties and forties for this “character echo” through the years but, well, it just felt a little like the writer was not showing any respect for the original material. Electric eels as a solution is both credible and imaginitive but... besides the point.

Now the general tone of the story arc is good, and it’s a tale about redemption and the unsought journey of Adam (as the Frankenstein monster is named in this) to find a soul... but the horrible gargoyles VS demons backdrop just seems astonishingly bad and, because of this and the fact that sometimes the actors seem to be a bit like they’re trying to find their gravitas and failing miserably, the film didn’t really engage me... at least not in the way I hoped it would. It’s a B-movie, for sure, but not one I will revisit any time soon... although I suspect the passage of time will do wonders for it in terms of nostalgic re-appreciation for future generations. Not a terrible movie but certainly not a great one either and not nearly as much fun as it should have been, to be honest. Only see it if you are a keen 'Frankenstein’s monster' enthusiast.