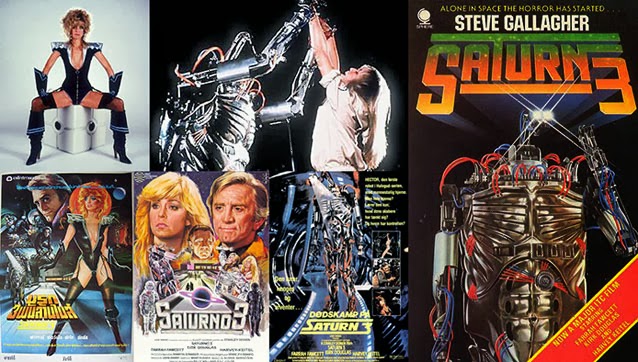 “There was a wet click and the whole hand fell free and spurting.”

This is a phrase that’s stayed with me for a few decades, since my first exposure to it as a twelve year old back in 1980. I don’t have the book it comes from to hand, it’s probably in the loft these days, but this phrase (or something very close to it) was from the Stephen Gallagher novelisation, taken from Martin Amis’ script, presumably, of a new movie which was about to come out called Saturn 3.

Now I never, from what I can remember, got to see this at the cinema. It didn’t come near me, from what I can recall, and even if it had come to my local it didn’t matter at my age because it got an AA rating from the BBFC. Not the 15 rating the IMDB claims it had, mind you... the 15 classification wasn’t a rating that was in existence at that time.

So as I was a kid I never got to see it... but the novelisation was all over the playground and it was what people were talking about in school at the time. We didn’t know it was a novelisation, actually. By the time I was 12, I was really growing tired of novelisations and realised them as the leeching, secondary way of making money off a movie that they are. I thought Saturn 3 was an original novel first, which the film had been based on. If I’d have known that the exact reverse was true at the time, I probably wouldn’t have bothered reading it, to be honest.

But I did and it was just the right mix of science fiction coupled with gory horror that some of us young ‘uns at school liked to read. This mania for the movie increased with features in the magazines we would all read, of course. The usual suspects. Starburst, Starlog and Fangoria. The holy trinity to deranged young fans of sci-fi, horror, adventure and intrigue on other worlds.

I remember the novel had a man murdered via wires taut against an airlock opening (ripping him into bits as he is unceremoniously blasted through them), the aforementioned hand lopping, a small dog pulled apart and a decapitation... followed by the murderous robot causing the majority of the trouble in the book wearing the head of his victim over his own mechanical stand-in for a head. It was all very bloody and so, of course, us kids just lapped it up.

When I saw it on TV about five years later, I remember quite liking it but was curious at it not being as bloody as I expected it to be from the novel (which is, it turns out, because it was obviously fairly heavily censored for the TV showings at the time). It was still a far cry from what I would have expected from a director like Stanley Donen, famous for his work on MGM musicals like On The Town, Singin’ In The Rain, Seven Brides For Seven Brothers, It’s Always Fair Weather and various other classics. For him to tackle something which is a “space horror” movie is a bit of an eyebrow raiser, perhaps, and the film has suffered a lot of criticism over the years... unfairly so, in my opinion.

I have a couple of criticisms myself, of course,  but they’re hardly make or break and, when I watched the new Scream Factory Blu Ray, which a friend had got me for my birthday earlier this year, I have to say that I really enjoyed myself and was particularly impressed with the very crisp and clean quality of the picture in high definition. In terms of image quality, in fact, Saturn 3 seems to be one of those moves that works noticeably well on this format.

It’s easy to understand why a film like this got made at the time. We were still in the wake of the first Star Wars movie, back when that was its full title and, by then, we also had A L I E N under our collective belts. A sci-fi terror movie must have looked like the box office gold that never quite materialised for it at the cinema. Which is a shame.

The film starts off with one of a series of bad special effects. Pretty much any effects work which shows spaceships flying in space with planets in the background in this movie are absolutely, unbelievably bad, it has to be said. Truly dreadful looking and not even fit to be in a Gerry Anderson TV show from 20 years before this movie was released. The first shot, in this case, is a rip off of the opening shot of Star Wars and it just looks like something out of Blakes 7. It’s very unfortunate.

However, other effects in the movie work extremely well indeed, not least of which is the main Frankenstein’s monster of the piece, Hector the robot. In the 1931 Universal version of Frankenstein, the company “improved” on the original work by having the monster inflicted with a criminal brain... which could be seen, perhaps, as a moral pacifier for audiences at the time. In Saturn 3, we have already seen Harvey Keitel’s character perform a coldly calculated and fiendish murder (the aforementioned airlock killing) and he doesn’t act like a "well person" should. Actually, I love Keitel as an actor but his performance in this seems incredibly wooden. Now that might have been a deliberate ploy to make a comment about the character which isn’t fully explained to us... but it comes over as a bit lacking. Anyway, where was I? Oh, yes. The robot he constructs, Frankenstein-like in the laboratory, has a quite sizeable brain which is educated via a direct link between Keitel and the robot. So we already have the old Universal theme of a lifeless husk being brought to life with a wrongly developed brain. It’s an old story.

The rest of the movie is an old story too and, it would be true to say, it doesn’t have much in the way of plot development, I suppose. Monster gets ideas above it’s station, falls in love with Farah Fawcett (as we all did from the dominatrix-like, black clad publicity shots in the aforementioned magazines... we would look at them and... erm... look some more), kills his creator figure and then runs amok while the only other two human characters, Farah Fawcett’s Alex and the larger than life Kirk Douglas as Adam, try to outwit Hector and find their way off the moon of Saturn on which they’ve been stationed all these years.

It’s not much of a story and the resolution, once it gets going, is quick and fairly easy... but it’s also a very easy watch. The sets are really just rooms and walkways but they seem to be handsomely lit like the director is delivering one of his famous 50s musicals and the camerawork and editing are very clean and easy on the eye. Farah Fawcett is also very easy on the eye and she actually does a good job, along with Kirk Douglas, who delivers a solid performance and shows just how “in shape” he was for a, then, 64 year old... with his energetic skipping, running and even a naked fight scene.

What little remains of Elmer Bernsteins classic score is pretty good too and it helps ratchet the tension up to 11. I was surprised that a sequence where Adam and Alex are trying to escape from the robot made me jump out of my skin at a certain point. So that pleased me.

The real star of the show is Hector the robot himself though. It’s mostly just a man in a suit, I would guess, but it’s a really nice, skeletal design and the production team have hydraulic tubes filled with blue and orange liquid winding around him to add a bit of colour into the proceedings and, although Hector does hold up the tradition of a relatively slow monster still being able to catch up with you somehow, it is a very threatening presence with a personality all its own.

And that’s Saturn 3. A very enjoyable, low end science-fiction movie which is a pleasure on the eye and, for the first time as far as I can work out, is available on a DVD/Blu Ray format both uncut and in the correct theatrical aspect ratio (I refused to buy the previous US and UK editions because of problems with one or the other). The new Shout Factory presentation has a handful of low quality deleted scenes from the extended network TV version (you sell it by the yard to TV to increase your revenue) and also includes the famous scene which was cut before it was released in cinemas and, I believe, only ever put in the German edition of the movie. This is a scene with Alex and Adam in which Farah Fawcett wears something very domme-like and it’s curious that the scene was cut because pretty much all the publicity photos in all the magazines at the time (and even the trailer) used Farah in this costume to promote the movie with... a scene which, in most countries, was absent from the print). So if you like this movie, at the time of me writing this review, this Shout Factory edition is definitely the one to get. A fun, no brainer of a good time which will be of interest to science fiction movie fans and, possibly, fans of robotics. It’s been a long time since I first saw it but... I had a real blast when revisiting this one.
Posted by NUTS4R2 at 20:53