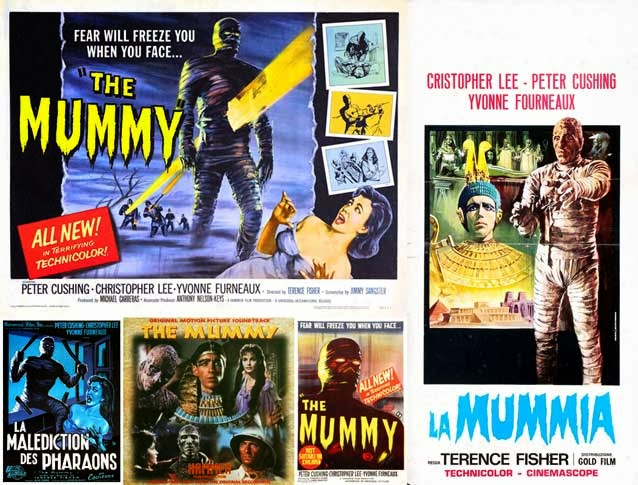 So here we have the Hammer studios third attempt at utilising one of the old Universal horror icons from the 1930s... well, actually from the 1940s mostly, but I’ll get to that in a minute. It was Hammer’s third big monster movie after their versions of Frankenstein and Dracula and, unlike those first two, this was part of a deal they now had in place with Universal to “reboot” certain of their monsters. Hence it is Kharis the Mummy, played first in the 1940s by Tom Tyler before Lon Chaney Jr took over for another three films, who gets reworked by Hammer here, although certain elements of the 1931 movie The Mummy, starring Boris Karloff as Imhotep, are also present.

For example, the opening of the Karloff picture, where a man is driven mad by the presence of The Mummy, is used in this movie (twice in fact... just to pad the film out and reveal more of what happened when it gets to be flashback time) and the back story of this incarnation of Kharis is almost identical to the Imhotep back story, referenced again in an overly long “padding” scene here and later re-used again much more dynamically and successfully in Stephen Summer’s reboot of The Mummy, forty years after this Hammer version. Another important element, which is again a hangover from the original 1931 picture, is the character of the main lead’s wife, played here by Yvonne Furneaux opposite Peter Cushing’s John Banning. Her resemblance to the love of Kharis’ life, Ananka, is used not once, but twice, as a way of preventing Banning’s death in two, almost adjacent, sequences which betray a certain sloppiness in the writing, to be honest.

There the Imhotep similarities end and we are definitely into the Kharis version of The Mummy, with Christopher Lee donning the bandages and reanimated by a fez wearing Egyptian tool of vengeance, although it should be noted that nobody mentions the magical tana leaves which brought Kharis to his lethargic reanimation every night, when required, in the original film series.

This is, apart from the dragging sequences of background exposition and unnecessary flashback mentioned earlier, really not a bad little movie. It’s nowhere near Hammer’s finest but there are certain nice things about it which make the film worthy of your attention on occasion. The colours, for example, are splendid and very reminiscent of the late, great Mario Bava in a certain scene where the father of Peter Cushing’s character first enters the Mummy’s tomb and finds a lot of the interior flooded with bright green, fluorescent lighting... which makes absolutely no sense in the scheme of things at all. But, whether there’s a rationale behind the lighting used or not, you can’t deny that the colours are dreamy.

Another thing is the design of the sets and the way things are shot. I noticed that the director has gone for a lot of triangular and angled compositions, especially in the first half of the movie, to re-emphasise the shape of the pyramids by echoing it in shots around tents or the slope of the roof or the outwardly jutting lines of a rock. At first I thought I was imagining this but then I noticed when there were no natural diagonals to bring out in a shot, the director had then resorted to tilting the camera in some scenes to enhance the diagonal motif. This design philosophy doesn’t seem to engulf the entire movie but it is pretty strongly pitched in the first half hour or more. Interesting stuff.

The performances by Christopher Lee (as Kharis), Peter Cushing and the rest of the gang, including Hammer stalwart Michael Ripper (yay!) are all very fine and on the money but a lot of the time they’re let down by a script that does tend to drag in places. They are though, as I said, supported by some nice set design and, for this film from this studio in particular, a quite extraordinarily good score by Franz Reizenstein, one of only four film scores he composed in his career as a composer, all of which date from either 1959 or 1960. This is much more melodic stuff than we are used to listening out for in a Hammer production, not that this gives it any more weight over a more atonal score, but it’s also one of the best I think (although I’m always a sucker for a good bit of Tristram Carey myself).

All in all, the movie is a bit pedestrian and repetitive (even the excellent score is overtly repetitive when, perhaps, it shouldn’t be, at times) but the film still has a certain atmosphere to it. The leading lady could have had a bit more to do rather than save Cushing’s character in two scenes and get carried off at the end though. This film certainly fails the Bechdel test on all levels, I’m afraid. But, even so, it’s got a bandaged Christopher Lee smashing his way enthusiastically through doors and windows (much to his personal cost as an actor, actually, from what I understand of the number of times he injured himself doing silly stuff like this on the film) and Peter Cushing verbally battling with Mehemet Bay, the latest of a long line of fez wearing villains who were a regular fixture in the Universal Kharis movies.

Like I said, not the best Hammer movie, but certainly one that lovers of the studio and their product can savour and enjoy. I’ll certainly be unwrapping this one for another look sometime in the not too distant future.