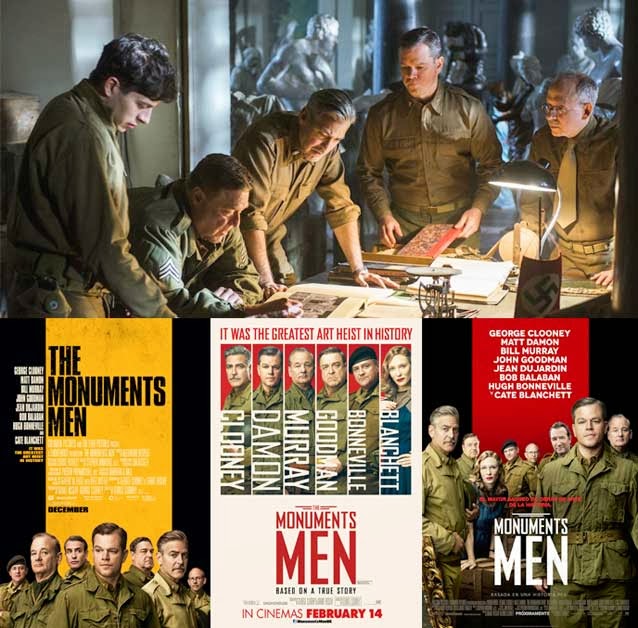 The Art Of War

Warning: Very slight spoilers which, in no way,
give away the course of the story.

There’s a scene about three quarters of the way or more through The Monuments Men which best demonstrates one of the things I found a little disappointing with this film overall. One of the lead protagonists has stepped on a landmine and cannot move for fear of blowing up himself and his colleagues. We’ve all seen this scene before in countless war movies, of course, and it’s a cheap but effective trick used by directors for decades to build up suspense, tension and force the audience to empathise with their characters even more... but this time it doesn’t quite work in it’s intent. At least that’s how it felt for me.

Instead of being played fully for tension, the director, as is his right, seems to want to play it for yet another in a series of “war romp” scenes. It’s not a funny situation but it’s played quite lightly and, for me, this really highlights the movie’s one, main flaw. There’s no edge to it and almost no consequence. It’s also dealt with in an unrealistic manner too... I thought the central characters were smarter than this.

Now my reaction to this might just be one of conditioning, to be honest. I’m really not one for watching too many war movies but we have been under fire in recent years from films like Schindler’s List, Saving Private Ryan and The Pianist, which show the horrors of war and pull, relatively few, punches in showing the raw misery that conflict will always bring into being. The Monuments Men, on the other hand, seems to be of direct lineage from films such as Kelly’s Heros and The Dirty Dozen in it’s genetic make-up (two films, I hasten to add, that I’ve not yet seen... so if I’m wrong in this judgement, please feel free to take me to task over it in the comments section below) and, naturally, films like The Inglorious Bastards and Tarantino’s own war movie in this vein, Inglourious Basterds (not actually a remake or homage to the former, in fact)... the latter being perhaps the best of this lineage to combine the War Is Hell but also, the bizarre War Is Fun element of a conflict which has been the subject of so many hundreds of movies since the 1940s.

It’s a decision and Clooney goes with his gut and delivers a war romp which is, in all honesty, quite entertaining... but finds itself at odds with itself, I believe, because some of the scenes he’s written in to deliver “the dark edge” are perhaps played a little too lightly for their own good. And I’m not putting that down to the acting because everybody in this movie... Matt Damon, Cate Blanchett, Jean Dujardin, John Goodman, Hugh Bonneville, Bill Murray, Bob Balaban and even Clooney himself, are all absolutely brilliant in their performances and it doesn’t seem to be their tone which is the problem.

For instance, I don’t think it’s a spoiler to say, when it comes to a movie set during the Second World War, that some of the main protagonists are going to wind up dead at various points in the movie. However, I found that, even though I liked all these characters, I didn’t really feel much when they died. Don’t get me wrong, the other characters on screen did... but I, as the audience, didn’t feel much. Similarly, when a couple of characters realise the gold they’ve been running their hands through is comprised of the gold fillings of dead victims of the German concentration camps, although we are given time to dwell on this horror, along with the characters, we don’t really feel it as such. At least I didn’t and, believe me, I’m not taking the actual events any less seriously for it.

I think the “lightening” effect I’m talking about here is something which came in the struggle to find the perfect edit and sound mix from the film. And also perhaps from the baggage that some of the actors have brought with them from other roles. Many of these are noted for giving some great comic performances and maybe that’s thrown into the mix too. Perhaps some shots needed to be a little longer or maybe have a less beautiful score than the “classic war anthem” style of composition, with direct lineage from the scores of Ron Goodwin, that master composer Alexandre Desplat has delivered... much to my puzzlement as this score doesn’t seem to me to fit his usual modus operandi, although it’s still a score and a half, to be sure.

So yeah. The film does seem a little, “war light” in places. Especially after such a brilliant opening montage of static shots of works of art juxtaposed with the sounds of hammer blows. This short sequence was almost stomach turning, when seen on a big screen, in the way the sound and image worked together in rhythm and sets you on edge for an intense and dynamic darkness which never quite delivers, at least on that front.

Okay, so that’s a pretty negative view of the film so far so let me just temper that a little and tell you about the good way of looking at this...

It’s actually quite fun and it’s well acted, holds your attention and doesn’t, not even once, get boring.

It was possibly scripted so that certain scenes would go to the various “stars” in the movie to play to their strengths but, honestly, it doesn’t look or feel like it’s been tailored for specific performers in that way and it flows beautifully, not feeling like a series of separate incidents highlighting characters... even though it kinda is in many ways, as the lead protagonists work in smaller, separate units for the majority of the film and only come together for key scenes every once in a while. It’s a solid little story and although it certainly doesn’t drum home the horrors of war I was talking about earlier, they’ve not been forgotten or pushed to the background either (maybe tonally but not in terms of sweeping them under a rug or something like that).

What we have in The Monuments Men, I think, is one of those films which is going to play on television during seasonal holidays like Christmas and Easter for decades to come and will, in future years, be rightly identified as a classic. I know, for instance, that when future generations sit down and watch this, they’ll see a snappy and solid little war movie with a great cast of actors who all died many years ago and wonder why this didn’t make a bigger splash when it landed at the box office on its release. The haze of nostalgic rediscovery is as valid a process of receiving the art form as any other, it’s my belief, so I think this film will be remembered well when it starts to be included in text books of the history of war films in years to come. But don’t take my word for it... go and see this possible classic in cinemas now while you still can. It’s nothing like a perfect movie for us now... but it may well be a perfect movie in the future.