Deliver Us from Evil: True Cases of Haunted Houses and Demonic Attacks 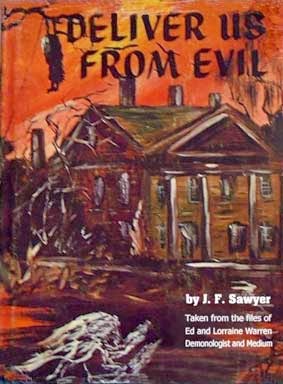 Last year I saw a truly great horror movie at the cinema called The Conjuring (reviewed here). The film was based on a case investigated by a husband and wife team of “ghost hunters/demonologists” called Ed and Lorraine, who were played in the film by Patrick Wilson and Vera Farmiga. The film made an impression on me, not just because the film was exceptionally well executed in terms of scariness, acting, shot design, editing and musical score... but also because all of the human characters in the movie were just such nice people who you would like to hang out with.

Of course, this made me curious to learn more about the case files of Ed and Lorraine Warren... so I sought out this book.

My first impressions of the book were that it was not very well bound and seemed quite thin. It is told, not by The Warrens but they do have a voice... as their friend, who used to go out on some of their cases with them, uses their recollections of the cases and presumably uses a lot of their words in his descriptions of them.

The chapters are quite short and each chapter details a different case... the book finishing with a case which was not investigated by The Warrens at the time it happened (in the 1940s) but with an account based on Ed Warren’s descriptions of it through his being one of the few people allowed by the church to have access to the historical records of the case case in question. That case is, for people who are interested, the one which inspired the famous book and movie called The Exorcist.

Now I was not all that sure whether I should give this book a good review or a bad review because, quite frankly, the stories are told matter of factly, but with also a small thread of poetic expression running through some of the descriptions which maybe make it seem a little naive at times. At the end of the day, though, I have to acknowledge that some of the small stories in here did give me a little chill and, if I’m being extra honest... did scare me a fair bit, actually. Which is interesting because, although certain horror films can scare me quite a lot, The Conjuring being one of them, it’s rare for me to be spooked by the content of a book. Maybe it’s the idea, controversial or not, that these events are purported to have actually happened which put the extra cold touch of fear down my spine as I was reading. I’m not sure but, ultimately, I have to give credit where credit is due and say that the writer certainly did his job if scaring me was the object.

However, despite being suitably scarified, one of the issues I had of it is that I didn’t get too much impression of who The Warren’s were and if this stuff actually happened like they said. I tend to be cynical sometimes and I can’t help that... even though I totally believe in the supernatural as I have known too many “converted cynics” who have had brushes with the ghostly realm to remain unconvinced. About the only thing I did get from the accounts here, and it’s something which was touched on in the movie, is the The Warrens are quite religious... which is unsurprising, I guess, if you’re working in the devil’s back yard.

Ultimately, I see this book as a kind of taster to explore these people and some of the cases they have worked on further. So, in a way, I guess the book does it’s job. Of course, the fact that I’m curious enough to explore this stuff further is something which moves me a step closer to the world beyond the one we can physically see, according to Ed Warren, and so I’m maybe thinking it might be an equally good idea to stay away from any further exploration, in case I set myself up psychologically to become a victim of such unearthly shenanigans. If I do find another tome which will give me anymore insight into the world The Warrens used to live in (Ed passed away in 2006) then I’ll surely let you know on a future review on this blog. Whatever I do though, if there’s one clear message I took from this book it was this... No matter how many times either family members during my childhood have told me not to... or how many horror movies have demonstrated the activity as a decision of folly, I should surely, never... ever... play with Ouija boards.