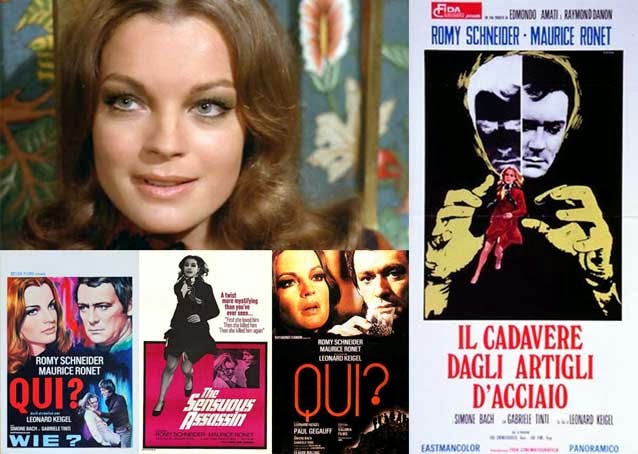 Well this is one of the more interesting purchases I’ve made recently, based on false information, as it happens. This one cost me a fiver from a dealer at a film fair and the reason I was swayed to buying it was because he told me the music was what Mondo Macabre had sourced for their ID jingle on their DVDs. Now I wasn’t sure about this because I was so taken with that jingle about 10 years ago that I wrote to Mondo Macabre at the time and they told me it was something they’d put together themselves. However, if there was a chance that this film was what that jingle was sourced from, then it was worth the fiver to find out.

As it happens the stall holder, who I have a lot of time and respect for, got the music mixed up in his head, I think. The music written for this film by famous French composer Claude Bolling, did get an equally famous, second hand usage many years later as ID music, but not on the Mondo Macabre label. The music in question, which plays out on the opening credits and a few other moments throughout the course of this movie, is the music that much loved UK film critic Barry Norman used to use for his “film chart” run down on Film 84 (or Film "whatever year you remember actually watching it with affection"). Someone’s put it on you tube, if you don’t remember it, here...

Now, I already had this piece of music on a compilation album called Shake Sauvage but I was really pleased to hear it in the context of the movie, which stars Romy Schneider as Marina, a woman who tries to shoot her boyfriend at the start of the movie after he bashes her during a “splitting up” argument. As a result, the boyfriend drives them both at high speed through the opening credits, playing against the famous music mentioned earlier, and she jumps from his car just as he drives over the edge of a cliff and into the sea. She hooks up with her, now, ex- boyfriend's brother and stays with him for a while, allowing herself to fall in love with him and seduce him.

And here the plot gets slightly kinked and I can see why some people have concluded that this film is a giallo with an A-list cast. It’s not, actually, because I tend to think of giallo as a genre having a body count significantly higher and more organised murders than those which happen in this film... but I don’t want to reveal too much because I want to write this review without spoilers. What I will say, though, is that the film basically revolves around two central questions. Number one is... did Marina’s boyfriend survive the cliff top plunge and, if he did, is it he who is stalking her in sinister mode throughout the course of the film? Question number two, and simultaneous to that, is does the brother, who is now Marina’s boyfriend, trust Marina or does he think she deliberately killed the man in question? Two questions which are answered quite satisfactorily, and with a little twist of crashing inevitability, near the end of the film.

The unusual thing about this film is not, however, the convoluted plot, which is competently handled although, to my eyes, is not nearly as spectacular in terms of sets and shot design as those twisted tales you would find on many a trashy but visually glorious giallo. What startles on this is that it’s very much a character driven movie. Time is taken to explore the characters with the actors and bring them to life as credible people and not just cyphers to hang a mystery on. We watch them as they get under each other’s skins, get drunk,  get angry (and various other emotional states with each other) and it’s all indulged in a way which is not something you would get in a giallo.  So while it’s not as watchable as something like, for instance, Martino’s Who Saw Her Die? on a visual level, it more than makes up for it in terms of the way you perceive and feel sympathy for the characters as they make friends, fall in love etc. Not a bad trade off, to be sure, although having both things would have been better.

Not a great deal more to say about this one. There’s certainly no assassin in this movie and the character the title may be referring to isn’t all that sensuous either, to be honest. The music is brilliant when it’s instrumental but the soundtrack also contains an almost obsessive amount of cheesy euro-pop songs sung in English which really kills the mood in certain scenes. It is however, bearable, and if the ending of the film seems a little unfair on the characters who have at last found a certain amount of happiness, it’s certainly an engrossing watch getting up to that point and if you like these kinds of movies, then I think you’ll certainly not regret giving this one some of your time... if you can find a copy. Not an essential watch but certainly some really great performances and with some really good musical high points. Worth catching if you get the opportunity.