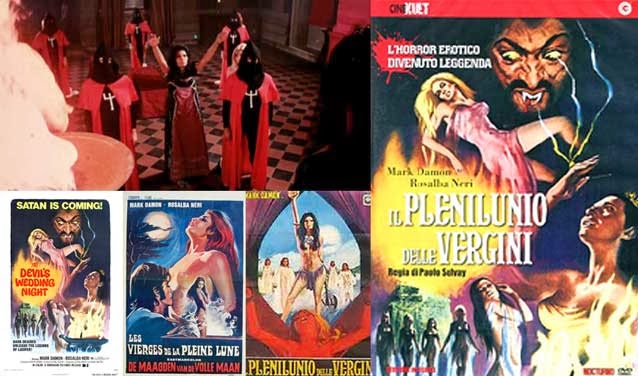 A girl running in the woods.

Without warning she goes a bit “psychedelic wash” like she's in a Monkees movie and then a big red eyeball comes out of the screen at you… ushering in some groovy credits which continue in a similar vein with scenes of nakedness in bright colour washes, letting you know you’ve entered the realm of... The Devil’s Wedding Night.

To say these titles are fairly striking may be a bit of an understatement. The giant crimson eyeball keeps coming back and really getting in your face.

I came to this film by my usual route I’m afraid. I was listening to some sound samples of some interesting looking Italian CDs and when my cousin asked me what I wanted for Christmas last November, I asked for this score. It’s pretty groovy... and actually quite funny in certain places when listened to within the context of the movie... but I’ll get to that later. Anyway, I was at one of the big Westminster Film Fairs towards the end of last year and I noticed that one of my favourite dealers had a copy of this movie going for a fiver... which is just as well seeing as what he charged me for Top Sensation (which I reviewed here and which, like this movie, also features the always beautiful Rosalba Neri in it).

So I bought it and it finally pushed its way up to the top of the backlog where I could watch it and see how the musical score works with the visuals.

Immediately after the titles, a man is searching through books in his study. He is to be one of the lead protagonists and he is particularly interested in reading an especially sinister passage from a book regarding an old magical ring with a blood red stone set in it that can conjure up demonic phenomena when it is held up to the moon during certain rituals.

The gentleman in question is interrupted in his readings by the entrance of another character who is quoting Edgar Allan Poe’s poem The Raven. “Aha,” thought I. “They’re obviously trying to jump on the AIP/Roger Corman does Poe bandwagon which started back with House Of Usher in 1960.” That thought was further compounded by the fact that I knew one of these two gentleman playing.... well twin brothers actually, although they really didn’t look anything alike to me... was Mark Damon, who was in the aforementioned Poe flick and a few other similar kinds of titles back in the 1960s.

The first brother, the one who was reading, is actually an archeologist and he tells his “twin” of the magical Ring Of The Nibelungen. Yes, that Ring Of The Nibelungen, the guy explains. The one made famous by Wagner’s opera (as he pronounces Wagner like you or I might pronounce Robert Wagner, presumably not for comic effect). Actually, the way they pronounce Wagner is not nearly as laugh inspiring as the way they pronounce Nibelungen. And I thought cunnilingus was a mouthful (well, yeah, okay it is if you’re doing it right) but this stuff here is unintentional comedy gold.

Okay, so I digress. Must pay attention and get this stuff right because it gets funnier. It turns out, says our man, the archaeologist, that this ring was famous before Wagner wrote his opera about it because... oh yes... it was believed that the red stone is not a ruby, but filled with strange red stuff that was part of a meteor that landed long ago in the Carparthian mountains. Oh, stop smiling, I’m not making this stuff up... it’s in the film I tell you.

Now, by some bizarre leap of faith or twist of the imagination, our archaeologist reckons this must mean the ring is located in Transylvania, in a place called Castle Dracula, in fact. However, his Poe quoting twin brother is a little concerned about this because... “vampires”. But our hero, well one of our heroes, because both brothers feature quite comically in this bizarre movie, tells him not to worry. He explains to him that  he will be wearing the amulet that he found a year before in the Valley Of The Kings which is an anti-evil charm, originally fashioned for warding off the demon Pazuzu (if that name rings a bell with anyone, by the way, remember The Exorcist?). So he wears this for protection and goes off to Transylvania where he will meet his twin brother in two days.

Now then, the fact that the characters are twin brothers is something of a point of interest to me now, I’m afraid. I didn’t know who both these actors were but when, later in the story, they get around to mentioning “hey we’re identical twins”, I burst out laughing because, seriously, they look nothing like each other and when, furthermore, one was posing as the other to ward off suspicion, I was chuckling quite heartily that anyone could be so taken in. Well, as it turns out... both the characters are played by Mark Damon... so the joke’s on me a bit with that one. Moving swiftly on...

Brother A stays at an inn in Transylvania, the night before he finishes the last leg to Castle Dracula. Now the inn itself is quite interesting because I feel like I’ve seen it before. It doesn’t look very Transylvanian at all inside the set... in fact, I think Lee Van Cleef might have been in this set in one of Sergio Leone’s spaghetti westerns... possibly The Good, The Bad and The Ugly. I’m pretty sure this is an old Italian western set being reused here but perhaps an expert in such matters could look the film over for me sometime. I’d be interested to hear.

So, while at the inn, Brother A meets up with the landlord’s sexy daughter, who is afraid because in a few nights time, just by chance, it’s the ritual of the Virgin Moon in which, every fifty years, many virgins are summoned mysteriously to Castle Dracula and are never seen again. Our hero seems to be a bit of a ladies man (and I’m being polite here... if he was any more forward he’d be wandering off set somewhere tp sleep with half the film crew) and he offers the young lady in question protection... that is, he sleeps with her and “bingo” she’s not a virgin anymore... so she can’t be selected for the ritual “virgin sacrifice” which is an important social event on the Transylvanian calendar, to be sure. Of course, this doesn’t save her later in the film but... oh, look, none of this movie makes much sense, okay? Just go with it.

Anyway, our hero gets to Castle Dracula and finds, instead, a sexy housekeeper and Rosalba Neri playing a descendant of Count Dracula himself. He looks about the place a bit, including a study which is the dead spit of the one he’s seen in at the start of the film, with dozens of the exact same “by the yard” bound books as the ones filling his own library... he must feel at home then.

Well, he really must feel at home actually because it doesn’t take long for him and Lady Dracula (no, that’s not her actual character name but, in essence, that’s the message we are getting) to be involved in a sex scene which is, it has to be said, one of the funniest sex scenes I’ve seen in a movie which is trying to be erotic. Seriously guys... if you’re editing together footage of two naked people in close proximity to each other... don’t be breaking the 180 degree rule at that point. People will burst out laughing at the surprise... which is what I did.

And then Brother A ends up as a vampire in a box while Brother B comes to Castle Dracula to find him... which he does, rescuing him from his coffin and then plotting with his brother to stop Lady Dracula from going ahead with her ritual involving the ring and various young, virgin women and then later fighting him, as Brother A embraces his inner vampire.

It all gets a bit confusing and, frankly, the plot just lets go somewhere in the middle and drowns in the surrounding sea of scantily clad celluloid women. The ritual of the Virgin Moon seems to require the siren’s call of the ring, summoning young ladies who are held in place by some red cloaked, black masked, cult members, while the female house keeper rips the clothes off of each one and has a quick fondle of each of their bared breasts. I had no idea why she was doing this but it’s something both she and the camera were really getting into. When she gets to slash each one with a knife and watch the blood slowly drip down their naked protrusions, I thought her eyes were going to pop out of her head in mock ecstacy... and then everyone starts chanting mock satanistic placations mixed in with “Om mani padme hum” and... wait, what? Yeah, that’s right. It’s all “satani this” and “Baal that” and then, all of a sudden. let’s throw some nice, peaceful “Om mani padme hum” in there too, shall we.

I’ve got nothing much more to say about this film. It’s both terrible and brilliant but, besides the full-on unintentional humour of pretty much most of the movie, there are a few saving virtues, along with the obvious one of large amounts of nudity, of course.

The film is mostly, apart from that amazing comedy sex scene, fairly well edited and the raw material of the shot design is great, with some nice compositions and some very fluid and smooth camera movements... it’s not a film to wallow in static shots at any one point.

And the music, too, is pretty cool but... that’s only when listened to as a stand alone listen. When it’s used in the context of the movie it sometimes gets used inappropriately. Like the times when the subtle, atonal washes of slow horror tones are immediately cross cut with heroic horse-riding music as Brother B rides to Castle Dracula, quite jarringly and... alas... repeatedly. It’s brilliant. Not as brilliant as the terrible acting in some of this though. I can’t believe people were taking this script seriously. And as for the ineffectual vampire guy who looks like a cross between the original Nosferatu and a slimmer version of Tor Johnson, but with less subtlety than either... well let’s just say that it’s a very hard film to take seriously and just leave it at that.

So do I recommend this one to my readers or not?

Yeah, of course I do. It’s hilarious. Don’t bother watching it if you want to be in any way frightened or want to try to take the film seriously on its own terms... the dialogue and plotting, as I’m sure you’ve probably gathered by now, is unbelievably bad. But if you are happy to have fun with these kinds of films then you’ll probably enjoy this one a lot. I can guarantee you that if you showed this as part of a pub screening double bill, there’ll be a lot of laughter in the house.

So grab yourself a pint... on The Devil’s Wedding Night.