John Carter And The Gods Of Hollywood 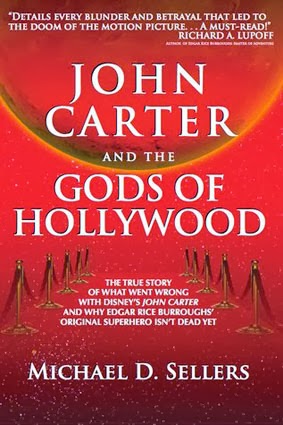 Okay... so 2012 saw the release of what was for me, at the time, one of the most eagerly awaited films of recent years, the ill-fated John Carter. When it came out I quite liked it but my enthusiasm was tempered somewhat by my bitterness in the way the title character was written, which differed a little to what was in the books, and also the shoe-horned in technological explanation given for the hero’s originally spiritual transportation across the astral planes to Mars - why they thought they should give scientific explanations when there wasn’t any in the source material just to please the majority of the current audience is beyond me (you can read my original review here).

Michael D. Sellers book, John Carter And The Gods Of Hollywood, is written by somebody who feels as close to the original Edgar Rice Burroughs material as I do (again, see my original review for the way the character has impacted on my life) and who, furthermore, actually tried to do something to help put the pre-release buzz back on track to where it should have been after the shoddy treatment that this film had in regards to the marketing push needed by the studio. This is the guy, it turns out, who made that “fan trailer” which was highly regarded as doing the job that Disney themselves weren’t capable of doing at the time and his involvement with the way the movie impacted on his life goes even a bit further than that.

This book is essential in the understanding of what the author calls the “perfect storm” of little things going wrong behind the scenes of the marketing of the film itself and, towards the end, tries to at least give the impression that there’s life in the old Barsoomian war horse yet.

Starting off right from the early announcements of the film as it got into Disney’s hands, it reveals how some accidents in timing, compounded by unbelievably dumb marketing decisions and an enormous lack of attention at just the wrong times in regards to mishandled social media accounts, and the like, led to the premature downfall of the movie that should have been called John Carter Of Mars even before the film had been released. Yeah, I mentioned the stupidity of the title in my original review of the film... John Carter on its own without qualification doesn’t work as a title to the international, young audience who are unaware of Burroughs’ legendary hero and it’s true to say that, when I found out in this book that the decision was made to drop the “Of Mars” was all due to the fact that Mars Needs Moms flopped at the box office... well, anger at the incompetence and buffoonery at the hands of this particular product certainly got an emotional response from me.

The book is extremely educational, even for those with no vested interest in the success or legacy of the movie. This is a great text book to understand just the kinds of “behind the scenes” things that can go wrong with a major Hollywood motion picture when the director, cast and crew are giving it their absolute all but the people at the studio are just tuned out (and it’s still a great film, by the way, check it out if you have a chance, there’s very few people I’ve shown it to who didn’t like it and a friend of mine asked for the novels at Christmas after I’d shown her the DVD). The writer demonstrates a gift for the reading of the market place through various trends and numbers and it’s detailed in all its gory detail, front and centre, in this book... making you wonder why the people in control of the way the marketing was pushed couldn’t do this for themselves. It’s almost like they were trying to kill the movie.

It’s also interesting to note how other things outside the world of Edgar Rice Burroughs' hero affected the fortunes, or should that be misfortunes, of this particular film and I was illuminated by the way films like the first of Marvel's The Avengers (aka Avengers Assemble), Bruckheimer’s Pirates Of The Caribbean franchise and the opening shots of Disney’s deal to buy the Star Wars franchise from George Lucas all had a little contribution to the butterfly effect that ended in the inevitably chaotic reaction at the box office. I was also somewhat surprised to learn a few things about the early history of John Carter’s attempts to infiltrate popular culture outside of the “beyond bestselling” original novels... such as the young Alex Raymond who was working on a strip version of the character's adventures before William Randolph Hearst pulled the plug and, as if by magic, the character Flash Gordon was created. I honestly hadn’t put two and two together before but, now that Sellers has documented stuff like this in this book, it’s quite easy to see how certain elements of the culture of Burroughs’ planet Barsoom somehow made it into the culture of Raymond’s planet Mongo.

It’s all fascinating stuff and a really great read. My only real criticisms being two ommissions. One is that there was no real information about Michael Giacchino’s excellent score for the movie... although, to be fair, this really isn’t a concern of Sellers in that it doesn’t really fit into the intentions of this book. That’s just me moaning as a fan.

What I did find, however, was a bit of a glaring error of absence... and I’m sure there must be a good reason for this (and I can kinda guess what that is but, it’s a reason that doesn’t excuse the error, in my opinion)... is that, other than by title, once, in an extract of something else reprinted as facts and figures source material, does Mark Atkins 2009 movie Princess Of Mars (aka John Carter Of Mars), which starred Antonio Sabata Jr as John Carter and Traci Lords as Dejah Thoris, get any kind of coverage or even acknowledgement in this book. I’ve heard it’s truly awful (and sometime soon I should be able to find out for myself and review it on this very blog - it’s in the post) but I would have thought the way this low budget, straight to video production would have at least have had some kind of impact on the perception of the 2012 movie. So that was a bit of an omission I thought.

Like I said, though, there may be good reasons why this cheaper (and probably far from faithful) "alternate" version of Burroughs’ classic doesn’t get a look in here and... even so, I have to say that I can only strongly recommend this book to anyone even remotely interested in the process of the marketing of a movie. Not to mention the actual fans of the movie, who seem to be increasing in number since the film’s DVD and Blu Ray release, as they slowly wake up to the fact that the film, which Disney kinda abandoned, is actually a pretty great movie. The writer explains a lot of what happened and does so in a fairly insightful and, importantly, well balanced style of writing which doesn’t allow his personal agenda to re-educate the potential audience of the film get in the way of his own minor disappointments with the final motion picture, many of which seem to echo my own thoughts on the film as a whole (which surprised me a bit, actually). Hopefully, a lot of educational establishments will choose to stock this in their library for students on film studies courses because it’s a valuable book, in my humble opinion, on the way a movie both can and... erm... shouldn’t be marketed. Definitely worth a read.