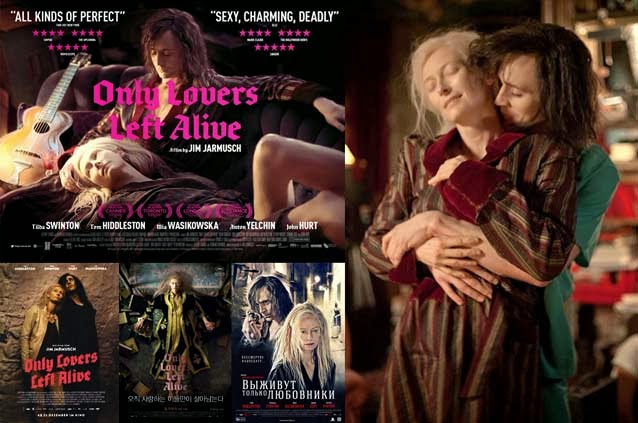 Up until a few years ago I thought the modern vampire movie was gone as a legitimate form of artistic expression and figured it was going to stay dead for a while. Zombies had taken over and not many people were really doing too much interesting with the genre, or at least that’s what I thought. Now I’ve seen four really great contemporary vampire films in the space of as many years and Only Lovers Left Alive is definitely one of the greats (the other three being Let The Right One In, reviewed here, We Are The Night, reviewed here, and Byzantium, reviewed here).

This time, master movie maker Jim Jarmusch takes his turn to play with vampires. That is to say, he’s using vampires to bring out one of the broader themes of his body of work and using that as a backdrop to, basically, have some fun with the possibilities inherent in the genre. This is not to say it isn’t a strong genre piece, it’s definitely a “Vampire movie” with an upper case V... but the way he uses the genetic make up and popular tropes of this type of experience very much requires a certain level of familiarity from the audience.

And in this artistic choice, of course, Jarmusch is not alone among film-makers.

I’ve noticed that a fair few writers and directors are taking the ingredients of the myth of the vampire, using the bits which they want and throwing the other rules out, making oblique mention of the parts of the myth that they have discarded for each film, assuming the audience already knows what those rules are... and thereby freeing themselves up to get on with “the story”. Which is an excellent way of doing things, no doubt, for an older audience... but young people who are perhaps less equipped to be familiar with the ritualistic elements of the vampire movie/novel may find themselves in danger of being left out of the loop if filmmakers keep using this tactic. Although I’m sure there’s an argument that, by the time one is old enough to see movies like this, the knowledge is already there. Which, I guess, certainly holds up for now with contemporary audiences... but future generations may not be so fortunate with the opportunity, and willingness, to watch the vast back catalogue of vampire films made over the last 100 years or so... but that’s an argument for another time.

Jarmusch starts this film with a startling array of rich imagery, beginning with some titles, in a quite clichéd font to match the legacy of the subject matter, superimposed over a slow circling backdrop of stars. This immediately puts the viewer under a little bit of tension and ready to enter a more hypnagogic realm as the titles have the illusion of veering off on their own if you lose your concentration or glance away from them to another part of the screen. It’s quite hypnotic. The motion is continued post-credits, as the starry background is replaced by a vinyl record rotating on a turntable and we are introduced to the two main vampires of the piece, Adam and Eve, played by Tom Hiddleton and Tilda Swinton respectively, in a series of shots which match the circling camera eye.

The swirling continues as they are intercut in their mutual slumber but, in different rooms and, once they get up and go about their business in two completely different places (Adam is sleeping in Detroit and Eve is sleeping in Tangiers) our perception of what we were just watching is completely overturned and we realise the dazzling camerawork and shifting distance of the main players from the lens is Jarmusch’s way of showing the mental connection between the vampires, even though they are separated by gazillions of miles, physically. Another series of shots of three of the main vampires drinking, which utilises a camera strapped to each actor I suspect, yields a similar sense of psychic camaraderie a little later into the running time of the film.

As Adam goes to get his blood supply from Dr. Watson (played by Jeffrey Wright) and gets some new guitars from his source, Ian (played by Anton Yelchin, the new Chekov in the Star Trek movies), Tilda Swinton’s Eve goes to see her vampire friend Marlow (yes, that Marlow, who wrote Faust and, in this version of celluloid reality, definitely wrote the entire output of William Shakespeare), as played by John Hurt, for her blood supply. The colours are really interesting as Jarmusch uses both fluid camerawork (and the occasional stint of handheld) to focus on what appear, at least to my eye, to be vibrant colours which have deliberately been toned down... so we get a kind of “filtered reality” feeling which is perhaps a visual rumination on the fact that, when you’re lived for as many centuries as the vampires characters in this film have, you get kind of jaded to things after a while.

The characters are set so you have Adam as a suicidal, Byronesque vampire archetype (something commented on quite blatantly by Eve during the course of the movie) who passes his time making great music which is never released and who gets a wooden bullet made so he can kill himself when necessary. And then you have the lightness and calm of the piece, his devoted wife who travels to Detroit to cheer him back up and act as the ying to his yang. The situations allow Jarmusch to comment and reflect upon the ideas made possible by the vampire myth in general, and since there are obviously only a few vampires here and there in this fantasy microcosm, it allows him to indulge on his kind of “last days of dying cultures rubbing together” theme, which he has dwelt on a few times, quite memorably in Ghost Dog: The Way Of The Samurai. As he explores the possibilities of the genre, he gets to also invent some great responses to the nature of conversation between people who have been around this long and lived in this way... which is kinda the point I think.

A nice little idea, for instance, is the fact that the vampires tend to regard the general living human race as zombies and, when we look at our own culture’s current definition of all that means as defined by the slow, shuffling, brain dead legacy of the George A. Romero take on zombies from the 1960s and onwards, and then apply that conclusion to the supercharged senses of the vampires in this movie, that’s a pretty cool analogy to make. Cool being the thing here because, like a lot of Jarmusch movies, Only Lovers Left Alive is nothing if not extremely cool movie making.

It also gets allows Jarmusch an arena to get away with some cracking humour, which I think is where the bizarre accusations of pretension may have come from. The writing, if taken out of context, maybe does seem a little indulgent but, frankly, if you are decoding the scenes and the tone in which they are played, you’ll realise that a lot of the dialogue is high comedy. “You drank Ian!” for example, or my personal favourite moment, where I let out a large, inadvertent chuckle, as John Hurt pointed out that the old “zombie, Shakespeare” was a talentless hack.

However, a fourth vampire enters the picture, in the form of Mia Wasikowska playing Ava, and with her she leaves a wake of disruption which finds our main two protagonists fighting for their lives and, ultimately, reverting back to their behaviour from the 15th Century. Which is kind of an interesting angle for two characters such as these, who are lazing through life at their own pace and reflecting on the almost soporific nature of their existence.

I absolutely can’t reveal to you what happens by the end of the movie, but I will say that the pace is pleasant and leisurely, always fascinating, with stops to take in tranquil moments of beauty whenever those whims of fancy need to be indulged... all set to a fantastically simplistic, yet texturally rich, musical soundtrack which includes Jarmusch’s own band Sqürl in the mix too. And just when you think the pain of the reflection of the future survival of these vampires is about to take itself too seriously, it leads in to a final shot which is an absolutely delightful celebration of the vampire genre and which will, no doubt, please many people... just like it did me.

If you like Jim Jarmusch films in general then you’re not going to want to miss out on this genuine masterpiece. I’d place it up with my personal favourites of his ouevre like the aforementioned Ghost Dog and Down By Law (reviewed here). Similarly, if you like vampire cinema, he’s successfully made a film which both reflects on the genre rulebook while somehow still managing to keep it fresh and as alive as, it turns out, it always was. If you like works of art then, of course, you too will love this movie. If I’d had seen this movie last year, it may well have been my number one film, despite some strong opposition. My worst problem this year, however, is that it’s probably the best film I’ll see all year... and it’s only February.

Don’t miss out on this one, though, whatever you do. It’s one of those films that the cinema of reflection was invented for.
Posted by NUTS4R2 at 20:34