Dawn Of The Planet Of The Apes 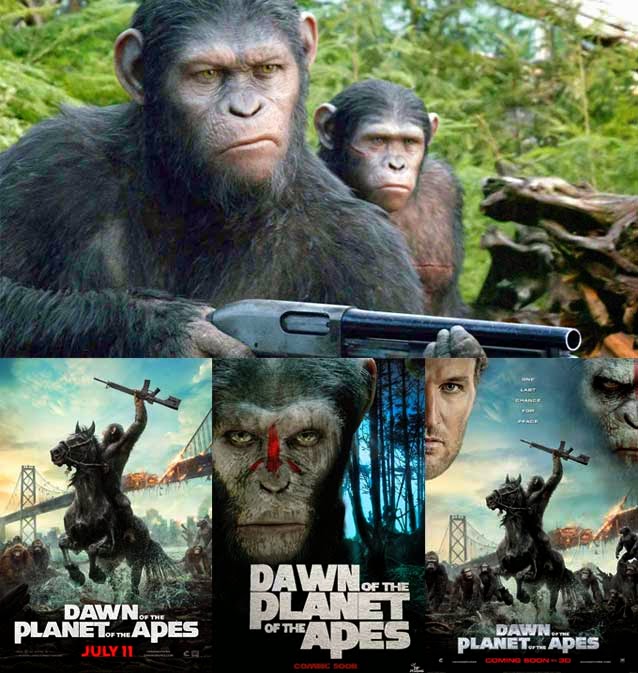 Gorillas In Our Midst

Dawn Of The Planet Of The Apes
2014 USA
Directed by Matt Reeves
Playing at UK cinemas now.

I’ve always quite liked the Planet Of The Apes franchise. I remember, when I was a lad of about five years of age, going to the Florida cinema in Enfield Town (long since redeveloped and ultimately demolished) and seeing a double bill of a sci-fi submarine movie, the name of which escapes me, and the fifth and final entry in the original run of films, Battle For The Planet Of The Apes... which was pretty cool to a five year old (although that fifth one doesn't stand the test of time, from what I recall). Caesar yelling “Fight like apes!” stuck in my mind for a very long time as a child.

Then, of course, there was the TV series, followed by the cartoon series, and the Mego action figures of various characters in the TV show, some of which I used to have. I remember the girl ape action figure, Zira, had very visible plastic breasts under her tunic which became a fascination for me when I entered my teens. I’d never had a female action figure before and was consistently amazed by her impressively rendered boobage... so Planet Of The Apes also provided me with some of my earliest sexual exploratory enquiries too... in a strange way. Yeah, I know... don’t think about it too much, it’s cool.

The original five films were a bit hit and miss, especially when compared to the original novel, but my favourites were definitely the first, third and fourth movies. When Tim Burton put his own spin on the series, it was different and very watchable but, ultimately, a less satisfying experience than I was hoping  for. Then, a couple of years ago, Fox released Rise Of The Planet Of The Apes (reviewed here), which featured the early years, albeit with a slightly different origin, of Caesar, the ape character who featured in the last three films of the original franchise entries (as played by Roddy McDowell in the fourth and fifth movies... an actor who also played Caesar’s father in the first and third installments). Rise Of The Planet Of The Apes was actually a pretty good movie and hit all the right spots. It’s right up there with the best in the original franchise and I was pretty much impressed with it on many levels.

So I recently saw the new sequel to that opening shot, Dawn Of The Planet Of The Apes, and I have to say that I am equally impressed with this one. The story, such as it is, kind of treads a middle ground tonally in terms of comparison to the original franchise, being a kind of midway mark between the last two movies in that sequence, Conquest Of The Planet Of The Apes and Battle For The Planet Of The Apes. This film is a direct sequel to Rise but none of the human characters in that movie make it into this sequel... which is a shame because that means the only connection to James Franco’s character in Rise is through the main ape protagonist here, and again it’s Caesar, who looks at a photograph and video footage during the course of this movie.

The last film left a couple of decent threads dangling in case it was popular enough to warrant a sequel and, for this one, the writers have ignored the space mission mentioned in a news report in the background of a scene in Rise and have instead chosen to take up the, perhaps more obvious, thread of the so called “simian flu” which was accidentally created in the lab in the last movie. So Dawn Of The Planet Of The Apes starts off with a sequence which is basically a moving infographic showing the human population of Earth mostly dying from either flu or the violent conflict brought on by that situation, and lets us know that there are only a few surviving pockets of humanity left in this world, which has moved on a full ten years since Rise Of The Planet Of The Apes. From there on we see some images of the intelligent apes in the home in the forest that they have built from themselves. There’s a lovely little moment in these opening sequences from composer Michael Giacchino when the apes are glimpsed in silhouette and gently introduced, which is a nod to some of the György Ligeti compositions “acquired” for Stanley Kubrik’s film 2001: A Space Oddysey. I think the tone of these opening shots is deliberate and Giacchino adds to the joke musically for people who are already reminded of the Dawn Of Man opening in 2001 during this sequence. So that was pretty cool.

Then we have the plot started which I won’t say too much about, other than it brings man and ape into both conflict and mutual trust and puts them in a position where a few of the apes and humans can learn to co-exist but are hampered by the bigger picture of xenophobic treachery within both their own ranks. It’s a nice idea and it works very well... pulling you into the story emotionally and taking its time to make the points it wants without jamming everything down your throat in a hurry... while still cramming in various action scenes and intrigues along the way. Which is one of the definitions of a pretty good night out at the movies, if you ask me.

The film is well acted and the “actors” and special effects team do an excellent job of giving the apes emotional subtleties and nuances which allow the audience to fully empathise with the plight of some of them, in the same way that not all the human characters are as easy to empathise with at certain points. We have a would-be human villain in Gary Oldman who we can totally sympathise with and ultimately is just seen as being a person making the wrong choices for the right reasons... and nowhere near as much of a villain as one of the humans who causes so much trouble for his colleagues when they are staying with the apes in their forest village. Similarly, we have the heroic Caesar in this movie contrasted against the “villain” ape Koba, who you will learn to hate more intensely than any of the human characters in the film by the end of this one.

This is all wrapped up in a neat bundle by Giacchino’s great scoring, which also has a few nods to the scoring of the original franchise movies, and which matches the action and pacing of the movie perfectly. I was lucky enough to see the last two Star Trek movies projected to the live soundtracks earlier in the year and, at the encores from both of these concerts, Giacchino got up on the stage and conducted suites of music from his up and coming Dawn Of The Planet Of The Apes score... so I already had the soundtrack on pre-order just on the strength of what I heard in those concerts. I’m looking forward to the disc arriving even more now that I’ve heard what he’s done throughout the course of the running time. So I’m hoping it’ll be good as a stand alone listen too.

If I had one criticism of the movie, it would simply be that the story here seems mostly superfluous, in all honesty. It feels like a bridge between one part of a story and the next and, to boot, it feels like this whole narrative could be cut out of the timeline and we could have gone straight to the next destination in the saga without bothering to explore the incidents and events pictured in this movie. But, having said that... honestly? Who cares? It’s entertaining as hell and I, for one, am really glad they made this movie. It stands head and shoulders with some of the best movies in the franchise and, considering that you’re looking at a bunch of hairy, animated individuals for a lot of the time, that says a lot.

If you like the ape movies then you certainly won’t be disappointed with this one. It’s a mini epic, rather than a major journey, for sure... but it’s a brilliant one which will pull you in and won’t let you go until the end credits start rolling. A film which plays around with family values, politics, racism and the ability to see past the status quo and follow paths which may lead to sacrifice and regret (as they do in this movie). Definitely take a look at this one... you’ll go ape for it.

Simians And Serialism - A History and Analysis of
Jerry Goldsmith’s score to Planet Of The Apes
Posted by NUTS4R2 at 20:48