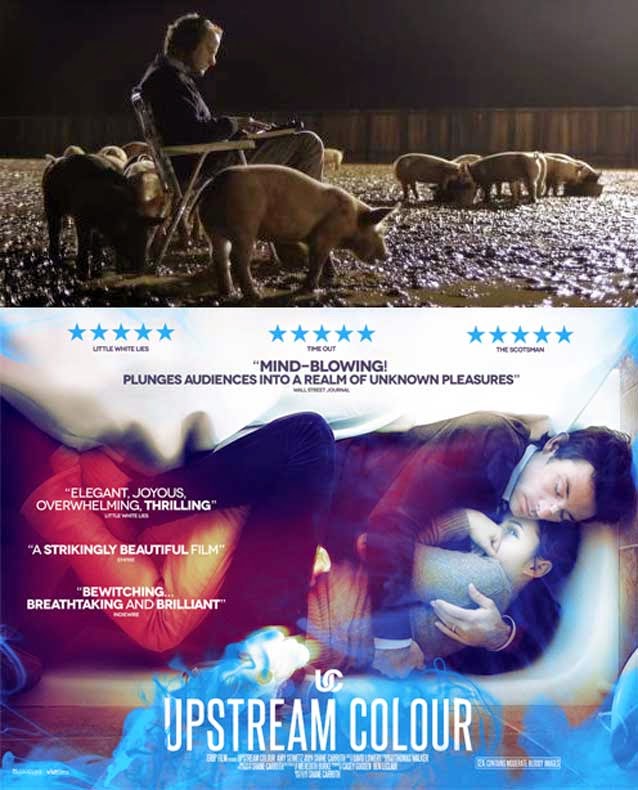 Sort of Warning: This review may or may not contain spoilers... probably not because I suspect everyone is going to have their own interpretation and relation to the events that take place on screen... but still, putting this warning here just in case.

Upstream Colour is the second feature directed by Shane Carruth, who also writes, produces, does the cinematography, co-edits, stars in and composes the soundtrack for the film. Like his absolutely brilliant first movie Primer, it takes a science fiction base but grounds it absolutely in a very matter-of-fact contemporary setting, exploring a very basic premise but in the most clever, non-linear and almost impenetrable way.

The editing choices in this movie allow for some almost random placements which don’t adhere to a strictly linear presentation of the narrative (if you’re happy to call it a narrative) and which is best received by an audience member as a jumble of puzzle pieces which are there to decode but which will not necessarily lead to an ultimate rendering of a specifically correct conclusion. So while Primer shares a certain style and atmosphere with this movie, the place the content leads you to in this one is more along the lines of something like, for instance, Ben Wheatley’s brilliant Kill List (reviewed here), in terms of it not taking where you think the destination might be or, if you did get there first, taking you there for no specific reason.

However, I think in the case of Kill List, the clues and provocative moments are deliberately inserted to lead you to a place which has no real solution to it (and if I’m wrong about that, please tell me so) whereas I’m pretty sure this film has a very specific linear narrative hiding behind the frames, as it were, and which still holds up solidly, no matter what the common or popular interpretation of it is. For instance, I didn’t feel I was totally getting it so I read a synopsis of the film on Wikipedia afterwards and I have to say that, after reading that quite detailed synopsis... I ended up thinking, “Hey, they didn’t get it.” Like in the case where a dream sequence is mentioned to explain the presence of a specific character (played in the most passively haunting but somehow sinister way by Andrew Sensenig) who can be quite often seen watching other characters in the movie. I don’t think these were supposed to be dream sequences at all, to be honest. More like visual metaphors to define the presence of a person watching his pigs/experiments... if that makes any sense and, unless you’ve seen the movie, it almost certainly won’t.

Here’s what I could piece together.

A woman’s life is completely destroyed by a man who uses a specific kind of maggot, which he hides in a pill capsule and gives her as drugs. It has already been demonstrated that the maggot can form a very strong bond between minds which even allows two people to synchronise their movements via their thoughts. This maggot gets into Amy Seimetz character Kris and, once it’s in her system, the man has total hypnotic dominance over her mind. In the aftermath of her lengthy encounter as his slave, for all intents and purposes, she is left without money, a job and brutally scarred from when she was trying to get the maggot out of herself. In the middle of this all she is lured to a man to remove them who actually pulls it from her body and implants it into a pig. She then forgets everything and has to rebuild her ruined life with no knowledge of how she got like this.

A year later, Kris meets a man who seems to share a common empathy, even though they seem to have no interest in each other initially. The man is called Jeff and is played by Shane Carruth. As their relationship develops, certain things slowly come to light, as much as the editing style and placement of the narrative allows it to do so in your mind, and it becomes very clear that Kris is not the only person who has been through this devastating experience. What’s more, Jeff is also a victim of this process and it appears that maybe this is why the two of them seem so dependent on each other... something that gets more acute as they begin to share the same thoughts, emotions, physical feelings and even perceive childhood anecdotes of each other as their own. Things come to a head and, with the help of their shared identity with various pigs, orchids (I think, don’t ask) and the published musical compositions/sound scapes of the pig man, they end up taking their personal thread, joining it up with many other individuals (who presuambly form a connective identity), and basically take over the pig farming business by giving them a much better life.

If that sounds kinda skewed and unlikely then... yeah, it probably is. That’s my interpretation of the movie at my level (it’s true, I may be stupid) and I suspect everyone is going to come up with something different. Is the pig farmer genuinely observing the plight of the various victims of the process started by the man with the maggots, for instance? I don’t know but I’m willing to assume he’s tapping into their heads somehow and maybe shares a link from the same process as them... maybe that’s how Kris comes to get the upper hand near the end of the film and, in some ways, take over the process while bringing an end to the potential ruin and devastation of people’s lives.

What I can tell you for sure is that Upstream Colour is absolutely gripping throughout, just like Primer was, and it seems to me to be artistically successful in all that it tries to do. The performances are electrical and about as naturalistic as you can imagine. The cinematography is superb, giving us drab and neutral tones pitched against some beautiful, almost luminous colouring for certain sequences. The editing is both easy to follow... even if it does feel like Nicholas Roeg on acid, but without the fanfare... and that editing serves to provoke an atmosphere of puzzle solving which leads to your full engagement with the material on offer. The soundtrack, while a little clichéd, perhaps, for a film of this nature, serves the onslaught of images very well and never once outstays its welcome.

If I’d have seen this film at a cinema last year as I’d wanted to (Seriously UK film distributors... what happened to it? It didn’t play in my local Cineworld once!) then it would easily have made my top five movies from last year. As it happens, I’ll have to be content with saying that this movie is a very definite and hard recommend from me. Shane Carruth is an artistic force to be reckoned with (he’s even pretty watchable as an actor, as it happens) and this movie is a great work of art all lovers of cinema should see at least once in their lives. Very much a blu-ray I suspect I’ll be lending to a lot of people who wouldn’t normally see a movie like this and it’ll likely get a return visit from me sometime in the near future too. Take a look when you get the chance.
Posted by NUTS4R2 at 20:06