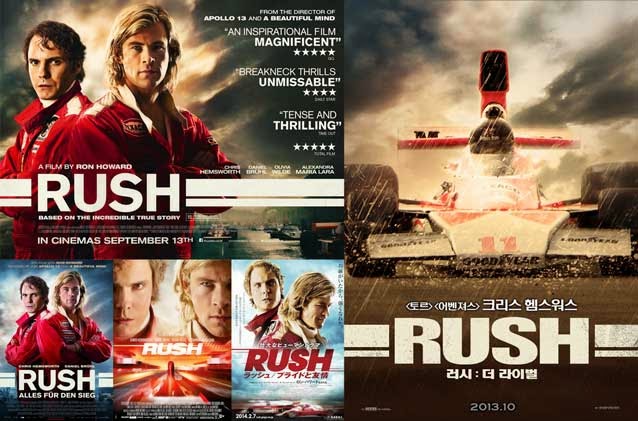 You know, I really never expected to be reviewing a movie like Rush for this blog. It’s not that I don’t like Ron Howard because, even with the spectre of Richie Cunningham from Happy Days hanging over him, I actually think he’s a pretty great director. He makes popular films for Hollywood (although this one is actually a British/German co-production, I was surprised to learn) in a very professional and competent way. Films which always have a sense of emotional engagement inherent within them. In fact, when you take my favourite of his movies, Angels and Demons, the sequel to his adaptation of The Da Vinci Code (and which you can find reviewed here), I have to give him credit for taking what is basically a not too subtly dressed up version of the tired old “run the policeman around key points in a city looking for the bomb before it goes off” plot and turning it into a thoroughly entertaining spectacle.

The reason I am surprised to find myself reviewing this particular movie is because, my fondness for John Frankenheimer’s movie Grand Prix aside, I have no real interest in either motor sports or, really, cars in general unless they happen to be associated with a film or TV series. I remember having a small Corgi or Dinky toy of Emmerson Fitipaldi’s black John Player Special when I was a kid and a basic Scalextric track but... that’s where the interest started and ended I’m afraid.

My dad, however, is a different kettle of fish. Over the years, especially the last decade or so, it’s become very clear to me that the man loves watching motor racing and follows it with a kind of “passion hidden behind a veneer of indifference” which I’d never really noticed before that period. So, when it came time for the bizarrely conceived, commercial celebration known as Father’s Day, I slipped a copy of Rush, a film I knew he’d not seen (neither had I), in with his ritual bottle of Port. And, of course, since it was Father’s Day... well... I had to watch it with him, didn’t I?

The film deals with the rivalry between two racing drivers, James Hunt (played by The Mighty Thor... um... I mean Chris Hemsworth) and Niki Lauda (played by Daniel Brühl, who was so good in Tarantino’s Inglorious Basterds) in the six years prior to and culminating in the 1976 Grand Prix. Now I kinda remember Hunt and Lauda after the fact, but only as names looking back from this end of the historical telescope... although I think Hunt may have appeared on television shows during my childhood. The thing is, when Niki Lauda had his famous “near death” crash in 1976, I was dealing with a car crash problem of my own. I was eight years old and I had been standing with my mum, talking to some friends on the pavement at a crossroads in Edmonton (firmly off the road and far back from the kerb, I’ll have you know) when two cars from the opposite sides of the crossroads hit each other at speed and both ploughed up the pavement and into us all. I probably had the most serious injury out of everyone involved in that my jaw got broken (I was wearing a thick duffle coat with a hood up and it would have been my head rolling if I hadn’t been wearing that, the doctors told me) and because it was broken in such a way that the doctors couldn’t wire it, I had to spend a couple of years off of school. Unlike Lauda I wasn’t permanently scarred, at least not in any way which is visible to the naked eye, but obviously James Hunt and Niki Lauda were the furthest people from my mind at the time... which means I knew relatively little about what qualifies as story content in this film before going in full throttle and watching it.

Howard’s film is something of a more intimate look at the characters in play in this real life drama. It  feels epic because, compressing the six years into a couple of hours means you have to make a lot of broad strokes and then skip to the next important thing... but the film really gives you a sense of who these people were (Niki Lauda claims the film is totally accurate, although insists people used to make more of the rivalry between the two than was actually there... which figures, knowing the way the press and publicity machine works) in a more up close and personal way than you might expect from a film looking as slick and Hollywoodified as this. So the characters and the relationships they make with other people is the focus of the movie and a camaraderie between the two main characters is often felt lurking behind their words. The director and the two lead actors do really well to capture this quality in the performance. Both are likeable characters and, even though it’s played up that nobody really liked Lauda, you can feel where each of the protagonists is coming from in their quest to win the world championship and I felt really pulled into the movie.

The racing scenes are another matter in that, for a film with a back drop of Formula One motor racing, they are few and far between and over very quickly. They’re good... don’t get me wrong. Shot and edited in a way that both conveys the speed and danger while giving you a feeling of excitement and anticipation, thanks in part to Hans Zimmer’s appropriately propulsive scoring. They’re no match for graphic designer Saul Bass’ wonderful racing montage sequences in the aforementioned Grand Prix (sorry, I can’t help but compare the two here) but they are great pieces of “speed on film” machismo... however, they just don’t go on for long enough and there’s not enough of them... at least that’s the impression I got.

Now I’m not saying this is wrong for the film, far from it. It may be that editing in longer race sequences would have harmed the drama and the flow of the film and Howard has probably made a shrewd decision here... but just go onto this one forewarned not to expect too much of the “vroom, vroom” in this movie. I read recently that the original draft of the script had been written without being commissioned and, because the writer assumed that anybody picking it up would not have much budget at their disposal, deliberately excluded any racing scenes throughout the whole of that first draft. Of course, when you get someone like Ron Howard on board, you’re going to get a hefty budget, I should think. It might have been that the insertion of racing scenes was a bit of a tightrope walk for balance with the dramatic writing so I’m guessing not a whole heap was done to change that in later drafts... relatively speaking.

And anyone who thinks Howard is going to take a big huggy feely approach to all the aspects of the story can think again. The scenes where the burnt beyond recognition Niki Lauda, barely surviving the human inferno he became for over sixty seconds, is having his lungs repeatedly vacuumed out in intensive care, really gives you a sense of the downside of the risk involved in this kind of “profession” and, also, the quite nasty way in which James Hunt beats up a reporter for his verbal attack on the post-crash Lauda after a press conference is also quite brutal in its intensity. Howard of course, being that he’s Howard, still manages to make these sequences also look really nice but... not to the point where they are too glossed over.

I was really taken with Rush and, by the end of it, felt that the two main protagonists were both honourable and likeable people who had both been dealt slightly unfortunate blows by life. I was educated a little by the dramatised “on screen history lesson” of the film but, more than that, entertained and enthralled by a picture about a subject I’m not much interested in... aka, all and any sports (except for maybe Rollerball, that’s a cool sport). If you’re into motor racing you’ll probably really like this movie and, if like me it’s not your thing, well... I reckon this movie is still worth some of your time. Sail on past that chequered flag as a fan of movies rather than anything else and I reckon this film will end up qualifying for you for sure. One to watch.
Posted by NUTS4R2 at 19:30