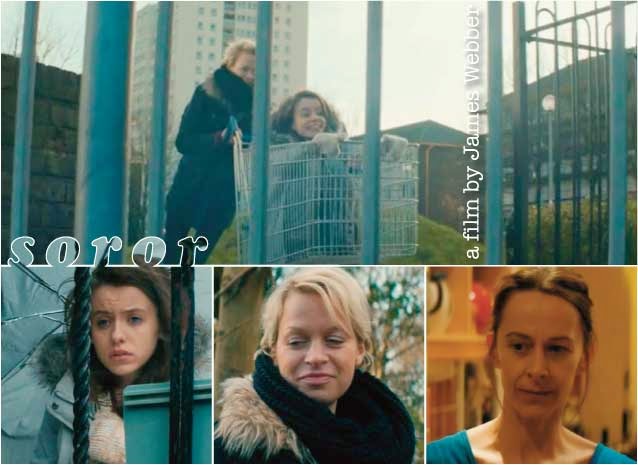 Soror is a short film by James Webber, a talented young director who I follow on twitter. I reviewed an earlier short film by him, Driftwood, on this blog here and I reckon I must have done an okayish job on that one because, after having seen a trailer for Soror on the internet and being pumped up to see it, the director allowed me to get a sneak preview of this one before it’s released. Hopefully he won’t mind me reviewing it here if I promise not to give too much away.

The film opens with a young girl asleep in a tracking shot which is replaced by an angle closer to her via crosscutting through white on black opening credits.This is set to a haunting piece of piano music by Richard Keyworth which shifts gear, directly after the title of the film comes up, to a more richly textured version of this, as a guitar spills into the orchestration to lift you into the experience of two half-sisters sharing a bond. It shows a good understanding of the way music can be used to support and add tone to a piece when used in this manner.

Visually the film is absolutely brilliant… which is what I'd expected from this guy, actually. There's a sequence near the start where the younger of the two daughters is being pushed around in a shopping trolley by her half-sister. The film is played back in slow motion, demonstrating a perfect marriage of camera movement going almost counter to the motion already created within the shot and highlighted by the passing verticals of a fence which this sequence is being shot through, to emphasise that counter motion. It's then edited perfectly and marries up with a continuation of that shot at a different angle. This, again with the addition of music for this part, gives the look and feel of the film an almost fairytale-like quality, which is a tone the movie manages to retain throughout, even when there is a large amount of tension within a scene. It's also a visual style which echoes throughout the length of the short and may well be a future sign of one of this director's visual fingerprints, I suspect. Bit too early to tell possibly but... take another look in ten years time and I reckon this may be a typical approach for this artist.

These slower, graceful pieces of motion are then pitched against hand-held, almost-but-not-quite- static shots which are little mini montages of a very short duration, building up glimpses of, say, a character revealing an attitude through the performance… rather than jarring against what has come before or after it. The editing is such that the flow of the film is left undisturbed during the transitions to and from these sections. Amazingly.

And the performances here by the main actors are amazing. Kate Dickie plays the mother of one of them and I already knew her through her outstanding work in a film called Outcast (reviewed here) but the two other leads, played by Rosie Day as the younger and Sian Breckin as the older of the two half-sisters respectively, are also quite amazing and do an absolutely fantastic job in this. A great deal of the acting and emoting is heart rending and raw which, pitched against the visual style... oh, wait, I’ll get back to that again in a minute.

The director also utilises a spin on an old trick favoured by directors since talkies began. One which I personally mostly associate with people like Akira Kurosawa or William Friedkin. This is to have the soundscape change dramatically from scene to scene… such as the almost silent shots of Kate Dickie looking at herself in a mirror cutting to a babble of background conversation in a dressing room at the younger daughter’s dance school. Amazingly, though, the sharp contrast between sound doesn't actually jump you into the next section of the movie with any kind of aftershock. Webber, in association with his talented sound designer Helen Miles (this guy seems to have a knack for picking outstanding collaborators), use the contrasting elements in a different way to those film-makers I mentioned… and this demonstrates a degree of subtlety I wouldn't have expected from a lot of people these days, to be honest.

However, the director does use the contrast of sped up and slowed down film and slowed down sound to produce a sharper contrast within certain scenes. It's like the audience is thrust into a surreal hyper-vision of the reality surrounding the characters but from a dream-like point of view… so it's like you're given a new primer to translate the visual and audio language of the film as you're going along. Which takes you into an understanding of the way you decode the shot information on the director’s terms a lot quicker and easier than you might imagine from my description here.

I don't want to spoil the story for you but it's a tale of the way the mother and the two sisters relate to each other and it's quite an intensely sad character sketch, in some ways. But, because of the beauty of the way in which it's told, the film is also quite uplifting in some moments too. For example, the younger of the two performs a brief dance solo and, when she goes through her choreography, this is pitched for the camera in two alternating, cross cut realities of that set of rhythm and movement. It’s actually a very uplifting glimpse into the way the mind’s eye sees something and how that beauty can be equally captured in real life. And as you can probably guess by the tone of this review, I was quite impressed by it.

In conclusion, Soror is a story of the very real and everyday moments of the, often, horrible weight of living… but it's not kitchen sink drama or, say, something that someone like Mike Leigh would do with the same material. It's looked at in an almost voyeuristic fashion with a camera which focuses on the beauty of the passing of time, as opposed to the details of the misery you would see if you were living through these experiences yourself… and that's why film is an art and it's why this film is a very good example of why film is considered an art… at least for this enthusiastic member of this film's audience. It shows reality through an almost dream-like visual and aural language which renders even the most tragic scenarios into a reflective beauty of their own. And that takes a heck of a lot of skill and dedication from the director, the producers, the cast and crew. I’m hoping that this guy and his team graduate into shooting commercially released feature films soon because, frankly, I think this director could well be one of the future greats of British movie making. Somebody needs to throw money and distribution deals at this guy soonest. If you get a chance, then this short film Soror is definitely one you should get a look at. It’s sheer poetry from start to finish and it’s something that people should know about.

You can read more about the production details of this film and see the trailer here at www.sororfilm.com
Posted by NUTS4R2 at 19:35