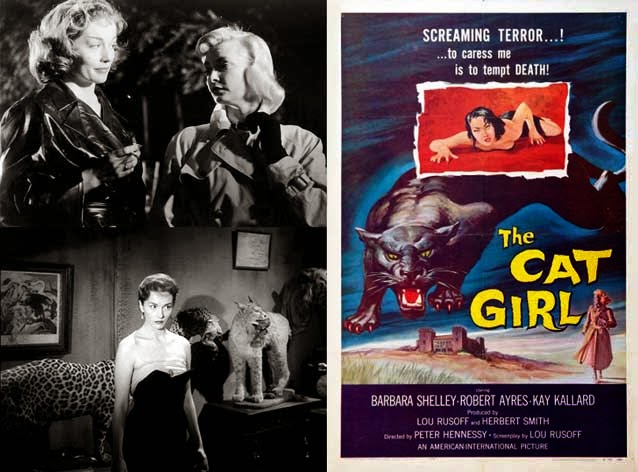 Okay. So Cat Girl is a movie I’d not heard of before it came up in one of Network’s regular DVD sales. I wanted this one because, for all intents and purposes, it looked like a 1950s British remake of Val Lewton and Jacques Tournier’s Cat People (a very tiny “pocket review” of which can be found here). Also, it starred Barbara Shelley, who is an actress I loved, mainly due to her role as the extremely strong female character she played as an assistant to the two male protagonists in Hammer Films' movie adaptation of Quatermass And The Pit (which is a film you can find reviewed here and, if you so desire, you can see my small visual tribute to Barbara Shelley in that role included in my 800th Blog illustration here).

As it turns out, even though it emphasises that the film is an update of Cat People on the back cover notes of the DVD, Cat Girl is really not, in any way, a translation of the aforementioned feline themed adventure. It may well have started off to be so, for all I know, but if it was... well, so much was changed in the writing, which is not credited as being based on anything in the opening titles, that the result really is unrecognisable as anything but the very vaguest of conceptual descendants of the 1940s RKO classic.

The films both have large cats in them... that’s it. They’re not even the same cat as far as I can recall. I’m pretty sure the species in question in Cat People is a black panther where, in Cat Girl, the large cat is a standard leopard.

In Cat People, the character Irene is the victim of a Serbian family curse which threatens to transform her into a hostile panther when she loses her virginity. A large chunk of the opening is taken up with the courtship of Irene, followed by her marriage and the breakdown of that marriage for fear that her character cannot consummate said marriage without turning into a wild, jungle beast. The rest of the film then deals with her psychotherapy and her husband's affair with another woman which, after a film which is totally psychological in tone (as opposed to the actual “make-up monsters” of rival studio Universal, who RKO were competing with in their most budget conscious, creative fashion), sees Irene finally transforming into one of the titular Cat People and, when her life is taken, reverting to the corpse of the woman she once was.

Cat Girl, on the other hand, features none of the sexual hang ups of the main character in Cat People. Barbara Shelley’s character Leonora Johnson is already married at the start of the movie and her virginity a long lost feature of her past. Instead, this film deals with her inheritance, where a family curse is passed onto her and she becomes, for want of a better word, psychologically linked with the family’s pet, killer leopard. The cat comes out at night and, when it does so, some shot cuts and reveals are used to show a distinct change in Shelley’s make up... but in no time does she ever actually transform into a cat herself... although she shares the same final fate as the leopard in this film due to her psychic bond. Naturally everyone thinks she’s totally crazy because... well, you know... she thinks she’s channeling a leopard... and so she is placed in a sanitarium and, in some of the worst and hilarious movie psychiatry I’ve ever seen, released to spend time with the object of her sexual jealousy and hate, the wife of her psychologist, who was himself once her childhood crush.

Quite the opposite, in fact, when you consider that the sexual subtext of the first film is not present in this one other than as a complete reversal. Indeed, the sexuality in Cat Girl is pretty blatant and strong, especially in a scene where we see Leonora’s shadow undressing against the wall and, certainly, given the “costume” she wears in the final act of the film... a shiny, black leather coat which seems to be her solitary piece of clothing in this section and which seems to be almost deliberately encoded as a sexual fetish. I’m guessing it was a deliberate choice in terms of the designers of the look of the film too... although there’s always a chance the actors and actresses didn’t realise it at the time.

The lighting is beautiful throughout, often creating a halo around the hair of the central characters and showing off the black and white cinematography nicely... which is lucky since there’s very little camera movement in the majority of the shots in the film and most of the movie is assembled as edits from static set ups. So the lighting does help to offset the often lack of dynamic visual motion. Thankfully, the editing is not too uninteresting in places and everything keeps ticking along at a fairly solid rate. Having said that, the film came out just a few months after Hammer’s colourful The Curse Of Frankenstein, so I’m guessing that the success of the former and the expectations it created for horror films in its wake possibly meant this particular gem had a more lukewarm reception in the year of its release, both here in the UK and stateside.

But I say “gem” because it really is.

Cat Girl is a film which is definitely “of its time” but it’s quite charming in its own way and, frankly, Barbara Shelley’s performance in this is brilliant in both its intensity and, perhaps, its bravery at the time. This is definitely another strong female role for this actress and I suspect she probably relished this part when she won it. Whether she did or didn’t, though, she certainly sank her teeth into the part, so to speak, and although a lot of the on screen shenanigans by her and the rest of the cast isn’t exactly subtle, it is passionate and, more importantly, interesting to watch. Shelley certainly has a lot of presence in this role.

The one area where I think this movie does slip up big time, however, is in the musical scoring. I was wondering who was murdering the film with all the heavy handed compositions while I was watching but, as it turns out, it’s not the work of one composer but a range of different composers’ stock music tracked in and used here. All I can say is that, though these pieces may have been useful in their own right and in certain situations, as a score for this movie they are a fair degree less than subtle and it’s such a shame because, with some more appropriate cues, or even some of the same ones knocked down a little bit in the mix, they might well have given the film a little more lift and support in certain scenes. So that’s a pity.

Other than that, though, I would well recommend this movie for audiences who have a taste for old school British horror curios and I’m well pleased that Network have put this little beauty out in a digital format. Not one for all modern horror audiences, for sure, especially as there are no real scares to be had, but certainly something which does its own thing and, perhaps, even pushes the sexual envelope a little for its time, at least in terms of the overt references you could get away with in a commercial release of the period, I suspect. Definitely a movie I plan to be returning to at some point.
Posted by NUTS4R2 at 19:25