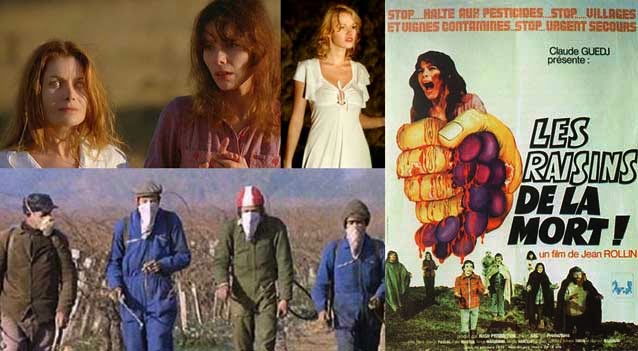 Hmmmm. This is another Rollin film I’d not seen before and I can’t say it’s up there with my favourites by this extraordinary director. It’s often labelled as a zombie movie, one of Rollin’s rare forays into the genre which would also include a film I’ve not yet seen, his nazi zombie movie Zombie Lake. Personally, the zombie tag is about as broad as pegging that genre to a film like 28 Days Later, as far as I’m concerned. It’s a movie which makes use of the unofficial zombie rule book which has developed from the version started by George A. Romero’s Living Dead films and, in that way at least, it’s an homage to those movies.

While the mechanics of wine grapes poisoned with new pesticides is certainly similar to another famous zombie movie, Let Sleeping Corpses Lie (aka The Living Dead At The Manchester Morgue), the film is more a close cousin of the “almost a zombie” genre which has flourished in the 28 Days/Weeks Later movies and, arguably, the REC movies, but which bears much more resemblance to George A. Romero’s own “almost a zombie” movie, The Crazies (and presumably its recent remake, which I didn’t get to see since I didn’t like the original all that much). That is to say, the shambling, zombie-like humans in this movie are just that... they are not actually dead, they have been infected and this is making them kill, usually quite gorily, anybody who is free from infection. A caveat to that, or should that be cadaver, is that the infection does give some of the infected a kind of rotting, zombie-like similarity in the case of a few “lead crazy people” as it were.

The film follows a young girl, Elisabeth (played by Marie-Georges Pascal), whose companion is killed in their deserted train by a pseudo-zombie. She is trying to get to the vinyard where her fiance works but she pulls the emergency brake to stop the train while she is still on the way as she is being chased by a “zombie” who we know, from the opening sequence, must have got on at the vinyard in question. Since this film is somewhat akin to a road movie, at a certain level, it makes no sense geographically since the girl spends the entire film heading towards the vinyard, and finally arriving there, when directionally it makes more sense that she’s been heading away from it.

Now, I certainly know the folly of trying to apply actual narrative logic to a Jean Rollin movie as he clearly demonstrated, on a regular basis, that he just wasn’t interested in such stuff. It did kind of grate in this one, though, because I kept trying to get the logic of a guy that worked at the main protagonist's destination getting on the train a stop before the girl, who had not yet arrived there, get off and then continuing forward to arrive where the original guy got on, straight in my head as the film played out.

Mostly, I found this movie a little more pedestrian than I would expect from a great surrealist like Rollin and although the shots of the characters walking through the French country landscape were, indeed, perfectly composed and beautiful, there were a lot less of the startling shot set ups that I would normally expect from him and the film did feel a bit rough and ready in places.

There is gore and nudity (most memorably supplied by frequent Rollin collaborator Brigitte Lahaie) throughout the film but there seems to be less of this on offer here than I would expect from this director’s films. Although there is a sequence where a naked blind girl is crucified and then beheaded, followed by shots of her now murderous guardian kissing the lips of her decapitated noggin, the film has far less of the surrealistic flourishes that allow Rollins genius to shine through and this left me wanting in terms of what I would like to get from this man’s, often underrated, cinematic landscape.

The score was interesting in that it seems to succeed and fail during various scenes in about equal measure, at least as a support for the on screen images. It also sounds like it was banged out by just one person on an old Cassio synthesiser for a lot of it and, the score, I would have to conclude, doesn’t really do the film any favours. This is something I feel a lot of Jean Rollin’s fantastical cinema excursions have in common, I’m afraid.

Ultimately, fans of post-Romero modern zombie horror will probably find The Grapes Of Death severely lacking in the style of filmmaking they would want to see and, even Rollin fans like myself may find this a less flavoursome dish than many of his others. I wasn’t completely disappointed by it, however, and I found the last 20 minutes to be much more coherent (not necessarily a good thing with Rollin) and entertaining than the rest of the film. Certainly something horror enthusiasts should at least try once, I think. I’ve never been much of an appreciative audience for the aforementioned The Living Dead At The Manchester Morgue, either, if truth be told, but I know there’s a large number of supporters for that movie so maybe this one will appeal to people too. As far as I’m concerned, though, I’m much more a lover of his vampire films, so far, than his brief dabbling with the zombie and, in this case, pseudo-zombie film genres.
Posted by NUTS4R2 at 19:30