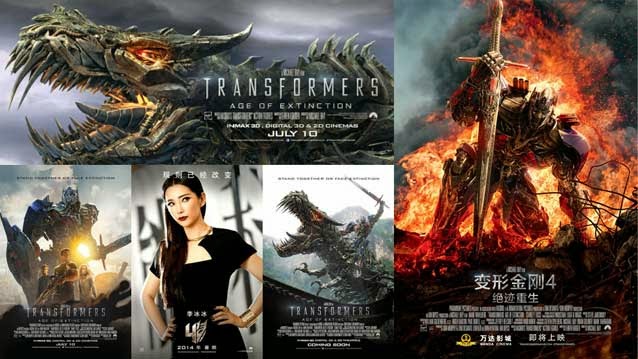 Transformers weren’t even invented yet when I was a kid... so I missed out on the whole toys and comics thing with them. However, after being grudgingly dragged along to the first movie in this series, I was more than delighted that the original was such a great film. Pretty much a modern classic.

It’s been painful and frustrating, therefore, to have to watch movie after movie of, frankly, badly written and badly paced sequels to that original bright light of an opening shot. Considering it’s the same director all the way through the series, I find it difficult to believe that these sequels can be so atrocious. And, I am very sad to report, that I believe that extends to this latest venture, Transformers: Age Of Extinction when, in direct opposition to my hopes and well wishes for the movie (which it doesn’t need anyway, it’s made a ton of money ensuring further dire exploits in our collective near future), I found myself constantly looking at the time and wishing the damn thing would be over soon.

The problem is not necessarily the story, I think... it is what it is.

Neither is all of the dialogue that ropey either and, even if it wasn’t quite up to scratch, you have a bunch of actors like Mark Wahlburg and Sophia Myles (the original Girl In The Fireplace... wasted in this but shining briefly) giving it their all and so it never sounds too bad. I think what we have here that screws things up a little is break neck direction and action choreography that is practically wall to wall, once it starts... and, in the odd moment when it does give you time to breath, which is barely, doesn’t give enough of a space in the onslaught to actually allow you to invest in the characters and the stakes enough to care about what happens next... and that’s really a shame because the director is more than capable of giving us a well put together, heartfelt film when he wants to.

When a movie written by the likes of Akira Kurosawa or Sergio Leone is made, it becomes clear that the pauses and, really quite long stretches of character establishment, character build up and dramatic tension, are all a very important part of a movie. You need it there so when you contrast it with a well placed action sequence, that sequence becomes more vibrant and dynamic in contrast to anything else that directly surrounds it. Tension and release. It’s all part of the game.

My daytime job is as a graphic designer. Occasionally you’ll get a really clueless client who insists on one or both of the following classic design mistakes.

Number one is they’ll try to fill every gap or piece of negative (or white) space with some kind of textual or design element. Absolutely the wrong thing to do with a design, people. You need the space there to help lead the eye in to where you want it to focus. If you fill the page the eye will just take it’s natural (and standard to all human beings as far as I know) journey across the page/screen without being particularly caught by anything in particular.

Secondly, another thing they’ll do is try to make three or more bits of information stand out and be more important from everything else by asking for this, that and the other to be in bold type, usually quite close to each other. Of course, all that achieves is all the emboldened words dilute each other’s strength and basically cancel each other out. Instead of one clear message you're scatter-shotting a plethora of them and they all fight against each other causing chaos to the eye. Most people, unless they already have a specific agenda that they have to wade through the content of the design for, will not bother to read something like this. The client has just lost the potential customer by ignoring the key message and bombarding the eye with fighting headers.

And I think that’s why Transformers: Age Of Extinction kind of loses it’s way in much the same way as the previous two sequels did. Instead of highlighting things with the occasional action scene, it’s just non-stop action. The kinetic equivalent of overcrowding the page with too many headers and not allowing any white space to lead you to where you need to be. Relentless and pounding set pieces are the order of the day in this movie and, while there are admittedly rest room breaks to ease the monotony, they needed to have a lot more of an emotional hook to them (and they do try, the scripting isn’t completely terrible... clichéd but not terrible) and be a lot longer so the action scenes felt like something when they kick back in gear here. There’s no real sense of that tension and release I was talking about in this one... just noisy motion and explosions. Which personally I find pretty dull, to be honest.

One of the tings that gets me coming back for these disappointments time and time again is that Steve Jablonsky’s score for the first movie is one of the great movie scores of all time. At least, it is to me. Unfortunately, although all the films have been scored by this composer, the sequels never really come close to recapturing the genius of that first score and, sad to say, that I include the score to this movie in that statement. Don’t get me wrong, there’s some nice music in it, what I could hear of it above the explosions, and it all seems appropriate but, again, it’s not got nearly the “hairs raising on the arms” beauty of the original score and that’s a bit of a pity. It does it’s job but, for the most part, you aren’t tapping your toes in time to the music as you are watching this one.

A big change with this one is that none of the human characters from the previous films are back in this one. That’s understandable given some of the politics and comments that have been made around the previous films in the series, but there were one or two I missed. The real loss in all that, though, is that of John Turturro, who always seems to traditionally turn up in the movies when you least expect him to. Alas... he’s not here.

The actors who are in this one, as I said, do a fine job but another reason they’re hampered is that of the regular characters that do make an appearance in this one, and I’m talking about the autobots themselves. They’re really not that sympathetic this time around. Bumblebee is underused, Optimus Prime is a lot more judgemental of humans than we’re used to and as for the other transformers... I just didn’t like them, period. These are not the robots I was looking for... and I really wanted to move on out of the cinema very quickly.

So that’s all I’ve got for you on that one. Special effects are all spectacular but somebody on the payroll really needs to realise that the biggest special effect is when you slow the pacing down and let the spell of the characters overtake you. That’s when you have a film. Transformers: Age Of Extinction is more of a big budget, travelling carny show. Alright as a curiosity but not somewhere you’d want to explore very often. It seems to have made a lot of cash already in the USA though, so “Yay!” and “good for them” to the people reaping those rewards. However, the downside for me to that is that this probably means there’ll be another sequel at some point. I really don’t want one.