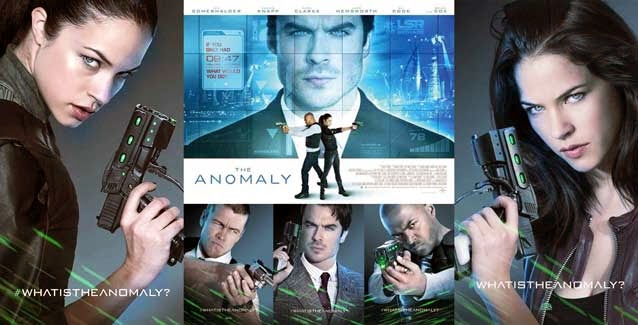 My more regular readers may remember that I’ve got a soft spot for the work of Noel Clarke - both as an actor, since watching him as a regular character in Doctor Who, and as a writer director, since seeing his movie 4, 3, 2, 1... which I still think is one of the slickest made British movies of the decade (you can read my review here).

The Anomaly is a science fiction picture with a big emphasis on action but with also enough intrigue in the central premise to keep you rooted to your seat as the story unfolds. The concept is to have a character, played by Clarke himself, who randomly inhabits the consciousness of his own body for ten minute periods at random moments in time. Why this is happening I’m not going to reveal but, his body doesn’t stop being “driven”, if you like, while he is not there so we are left with a character who wakes up in himself and who has to quickly play “catch up” to find out what’s been going on in the days, weeks or months since he was last... well... since he was last himself, so to speak.

Now this is not just an interesting idea for a story... it’s also an interesting idea for the medium of cinema because it gives you the highlights of the story arc and trims out the slow crawl of the mechanics of the story, instead leaving both the character and the audience in the position of having to catch up on all the exposition in what is often an action scenario (the character is not happy with what his body is being used for while he’s not inhabiting it). In other words, it makes the pacing of this particular story arc very fast and punchy and you are thrust right into the action with the character as you try to decipher things with him.

It’s a slick bit of writing and, right from the outset, the character is placed in a danger situation which allows the main components of the plot to be laid in as foundation so that the rest of the globe hopping locations this character finds himself in all add little pieces to the solution of the puzzle. It’s low budget sci-fi, actually, but it’s also very shrewdly put together because the breadth of the locations and sets give it an almost epic feel but, when you get into the second half of the movie, the same locations are revisited at different stages of the scenario and, although this looks like it’s done purely for budgetary reasons (well of course, you work the sets and save the pennies if you need to) the cleverness of Clarke’s script ensures that the reasons for the reoccurrence of various sets make perfect sense within the continuity of the piece and I never felt cheated on this idea once.

The performances by the main leads Clarke and Ian Somerhalder are great plus, the main female co-star Dana, played by someone called Alexis Knapp, is a beautiful stand out performance too... initially leading the camera on with an eye candy scene but really shining in her role as a prostitute with a heart of gold (hey, clichés can work, okay?) and giving the main character, and the audience, some kind of golden relationship chalice as a goal for what the characters are going through in the movie. There are also a few brief appearances by Brian Cox, although he doesn’t get to do a lot in this one, to be honest.

There’s some nice CGI work here and I was particular charmed by an early portion of the movie where the London skyline is augmented with the buildings of the future setting of this story. You often see this kind of thing done with other major cities (which you also see in this, of course) but rarely with London, it seems to me.

The camera work is mainly of the shaky, “brief shot and cut” variety but this is a natural decision due to the blistering pace of the movie and it does get intercut with some slower, more fluid work to give the brain time to pause at various intervals and take a break. There are some slower sequences and the balance of these, mixed in with the action, seemed just about right.

As always, I have a few criticisms and I’ll deal with those here.

The fight scenes are excellent but... somehow they felt kinda cheap. Pretty much all the action sequences run at slow motion and the more positive side of me tells me that this is to highlight the fact that a) the actors are doing their own fighting and b) the chorography of those fights is pretty cool. So there’s that. However, the cynical side of me is suggesting that maybe the actors couldn’t do all the action fast enough to keep up with some of the great action fist fights in modern movies (I’m thinking of films like The Bourne Identity now) and so the shots were slowed down to give the impression that everything is going much faster than it actually was, if that makes sense? Having said that, I did love these fistfight scenes and it was interesting looking at the actor’s faces during these slow-mo moments to see the sneers and scowls which they contorted their faces into during the sequences... that was pretty fun.

The only other comment on the action content is that there weren’t enough chases to mix things up. Only foot chases but, I’m guessing, the budget didn’t allow for the odd vehicular chase to lend variety when it was needed and that’s a shame because, at one point, I did find myself thinking... “What? Another fist fight?” However they were great scenes, as I said above, and they were expertly scored, as it happens, by a composer called Tom Linden. He’s a composer I’d not heard of before but, frankly, after hearing this, I do want to hear more of his work in film. The action sequences have a kind of Tron Legacy feel to them (in fact, I wouldn’t be surprised if some of those Daft Punk cues were used on the temp track in the early cuts) and, although electronic music is something I know little about, I think this score really holds its own with some of the great electronics augmented film scores of the past. It doesn’t look like the score is going to be made available commercially anytime soon though, which is annoying since it would have been an instant purchase for this reviewer.

My only other minor problem with the movie is the viewer’s perception of time. We know that the central protagonist has only ten minutes a pop (asides from a few certain scenes... don’t want to put any spoilers in here and tell you why) but it felt to me that in some of those sequences, the character seemed to be cramming in an awful lot of activity for ten minutes worth of “story time”. I guess if you sped the fights back up then this may have fixed it in most cases but... a couple of those sequences did seem a bit content heavy to be fitting into their allocated sequence. Personally I would have maybe been tempted to double the amount of time the main character had each “visitation” but I’m guessing doing this would have created other problems at the writing stage so, if this was the director’s best compromise then, hey, I trust this guy.

But these minor gripes aside, and they are minor, I think what we have here is a really great example of a low budget, British made science-fiction movie that weaves a cleverly thought out concept and does so in a way that is fresh and pacey and which certainly doesn’t get dull at any point in its running time. A very satisfying movie, again, from Clarke and one which takes on the US sci-fi action film and shows that you can do something which is often far more entertaining with far less money. It seems to be playing in only limited performances at my local and all I can say is that, if you’re a fan of science fiction movies, then you certainly might want to give this one a chance. Definitely recommended viewing as far as I’m concerned and I’m still keeping my fingers crossed for a sequel to 4, 3, 2, 1 at some point. Someone needs to give this writing, directing and acting phenomenon of a geezah a much bigger budget to play with, methinks.
Posted by NUTS4R2 at 13:07