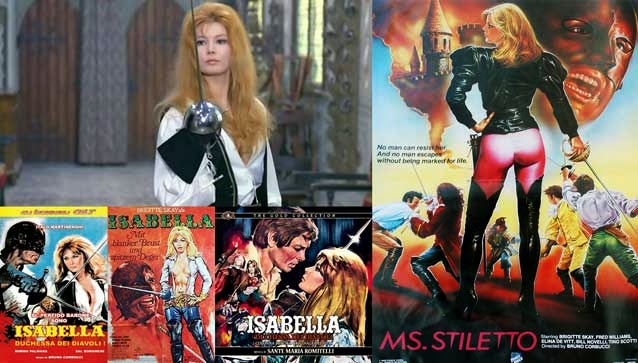 A quick word to the wise: By a bizarre coincidence, the same day I had planned to watch this film, I discovered that there was also a so called “full version” of it posted on YouTube. I was surprised at this due to the nature and content of some of the scenes depicted on the back of the box and, sure enough, when I had a quick look at the YouTube version, it’s been censorially butchered by as much as ten minutes, with many sexy sequences gone, giving the film a completely different and, somewhat tame, feel. So my advice is... don’t watch the stupid version on You Tube and try to source a copy from somewhere else if you want to see this one. Oh... and I guess there’s kind of a spoiler in this review but, honestly, it’s not that kind of movie.

Well this is a bit of a fun romp!

Directed by Sergio Corbucci’s brother Bruno... Isabella, Duchessa Dei Diavoli is based on one of the first of the adult themed, erotic fumettis (Italian comics, not fotonovels... which is an English bastardisation of the term) from 1966 and onwards by Sandro Angiolini. Set in 17th Century France (think Dumas’ Musketeer kinda times), it tells of a young girl’s survival after seeing her family castle stormed and her parents and friends butchered, which all takes place in cracking pace before the swirling, “of their time”, psychedelic opening credits. The film then jumps to a grown up Isabella (played by the lovely Brigitte Skay) who has been living with her “new” family, a bunch of gypsies, by whom she has been trained, since that fateful day, to be able to handle herself in a fair fight. We know this much because the introduction of our fully grown protagonist shows Isabella beating her friend in a contest which involves her throwing two knives simultaneously and splitting apples with them... which have been propped up on the horns of an animal skull. All good stuff.

However, when nobility comes knocking, she leaves her new, good, honest, thieving family and starts living with her peers... using herself as bait to lure out the various assassins who have been sent to finish the job from all those years ago.

And that’s about it as far as the plot goes. The film is foremost an exploitation movie which is intent on giving you lots of sex, action, broad comedy and heaps of unnecessary but mostly appreciated nudity. Which, frankly, I am assuming reflects the original comic book rather well... can’t say for sure since I’ve never read an issue of this one but the film is suitably lurid enough to capture the essence of similar products I have read.

For example, Isabella tends to wear her swordfighting clothes (typical “three musketeers” style costuming) with quite a few of the top half buttons undone, which means her cute bosoms are threatening to burst out at every shot, of course. This means that shots of her running up and down castle ramparts and engaging in what can only be described as energetic swordfights with lots of lunging and thrusting, are all made even more spectacular by the anticipation of a costume malfunction at any moment and, being as this is a film which is happy to cater for popular tastes, her costume does exactly that on more than one occasion... with things popping out at opportune occasions.

The direction and camerawork are all quite beautiful and Bruno Corbucci obviously has as fine an eye for "the elegant shot" as his brother. Lots of shots are taken from low angles, which I found most interesting, and the screen does tend to get split up into vertical rectangles on occasions in terms of the placement of people against foreground or background objects.

The style of some of the camerawork is of particular note in that many times we will be moving around and following a character or group of characters with a handheld camera but, then, the shot will suddenly stop moving and we will find that we have been lead to a place where we can observe a static and nicely composed composition as the characters go into the shot and we are left behind observing. It’s a curious way of filming things but it works quite well and we are given the impression of following along and being lead to some observation point where we can step back and take a breather. Cracking stuff.

The handheld camera also comes into play during most of the sword fights, where we tend to get right in on the action with a few of the characters while the battle rages around us out of shot, before we cut to an establishing shot after each set of ferocious engagements.

Some of the dialogue writing is laughable and maybe that’s quite faithful, coming from a comic, but I similarly enjoyed it immensely. Some of the throwaway lines, such as when Isabella first parts ways with her makeshift family and says "I'll write you a letter as soon as I learn how.", were quite telling in terms of filling in the characters and their varied skill sets. And of course, amongst ripping lines of dialogue such as "The idea that she is still alive is anathema to me." and the nonsensical but wonderful "Don't worry child. We have secret medicines to revive the dead.", we are also reminded of the exploitational quality of the film at every turn, such as with the following exchange between the German bad guy Baron Von Nutter and a lady acquaintance which goes thusly...

Baron: "I assure you my dear, among the German nobility, the greatest art is the art of love."
Lady friend: "Your younger brother is altogether too artistic."

Just how much of an exploitational romp is this movie?

Well some of the wonderful, stand out moments in the film includes the following: a lesbian bath scene that turns into a murder attempt, the aforementioned swordfighting with Isabella’s breasts threatening to pop out of her shirt at every sword thrust which leads to a scene near the end where she gets into topless swordplay, a bizarre contest to sexually stimulate a man into moving for reward or penalty, a woman fresh out of her bath barrel wrestling a man naked in spilt flour, an aphrodisiac cream which, when rubbed into Isabellas bottom, produces white hot passion and desire in her and, of course, the obligatory topless whipping scene which seems to be a staple of eurotrash films dating from around this kind of period (honestly... not... complaining... here).

The film then resolves itself with a bizarre, extended love scene between Isabella and her leading man in slow motion just before a final scene where the wrong man is publicly beheaded, allowing the now “masked villain” Baron Von Nutter to escape and live for another film... a film which sadly, to this day, goes unmade. I say sadly because, seriously, I’d love to have seen a sequel to this one.

I hadn’t even heard of this movie before I picked it up from a stall at one of the major UK film fairs earlier this year but, as far as exploitation films go, it’s certainly one of the more entertaining and elegant breed of the species which I’ve had the pleasure to watch and I have to admit to thoroughly enjoying this one. A 500 piece limited edition of the score from the film was released, again coincidentally, on the day I watched this... so I’m looking forward to sampling Sante Maria Romitelli’s lush tones away from the movie and I just hope enough interest becomes apparent at some point for a proper, commercial release of this film sometime with a good looking transfer so I can see it under better conditions. One of the stronger of the comic book movies made in the 1960s as far as I’m concerned and I’d definitely recommend it to anybody who is interested in a little nudity mixed in with their swordplay. And with the gorgeous Brigitte Skay playing Isabella... well... she can swash my buckle anytime.
Posted by NUTS4R2 at 19:29