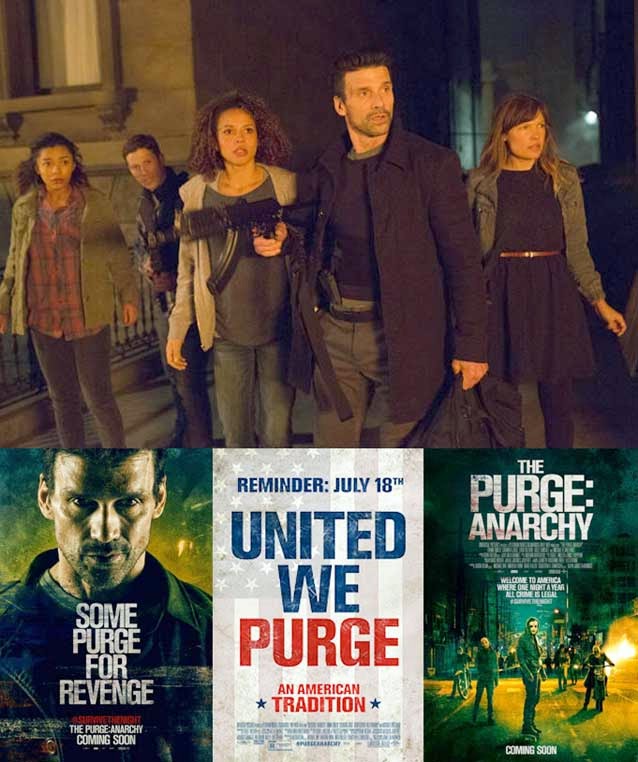 It’s funny. Although it was only last year, I thought I'd remembered not really being overly fond of The Purge, the first movie in this series. However, I just looked back at the review I wrote of that one (which you can find here) and I actually didn’t give it a bad write up. I was quite defensive about it on some points and, interestingly, one of the points I was going to push in my review of this film, also is pre-empted by me in that initial review. I also picked up on a fair few problems with that first movie and, I have to say, at least one of those problems is repeated in this one too.

The Purge: Anarchy retains none of the characters of the first film and is set one year after the events of that first installment, in the year 2023. It takes the central premise from the original, a twelve hour Government sanctioned period where any crime, including murder, is legal... to keep the crime rate down for the rest of the year... and runs with it. Now it doesn’t expand a great deal on the initial idea but, what it does do, is it explores the obvious symptoms of The Purge and also enhances the, perhaps somewhat obvious, hidden agenda as to why the government wants these annual purges happening.

While the first movie was pretty much a siege turns into a home invasion movie... this installment plays out as the absolute opposite of that tactic. It concerns multiple sets of characters who are, for whatever reason, out on the streets and trying to get to shelter while trying to survive the animalistic death orgy that is the annual “purge”. This surprised me somewhat because I thought it was going to just be a slightly altered re-tread of the first one and, while I had obvious reservations about that, this one really appealed to me and I enjoyed this a whole lot better than the original... despite the fact that Ethan Hawke and Lena Headey weren’t in this one.

It’s an ensemble piece, of course, and the various protagonists are all pretty strong in this. My particular favourite was the main antihero character “Sergeant”... played with great presence by Frank Grillo, who played one of the main "H.Y.D.R.A inside S.H.I.E.L.D" bad guys in the last Captain America movie (reviewed here). He does an absolutely bang up job as a tight lipped, no nonsense, knight in tainted armour killing machine and I read just today that the majority of his dialogue, including his back story, was cut from the movie. Now this is interesting because I bet he wouldn’t have been as half an interesting or compelling character if he’d been talking all the way through so I find it interesting that an already good performance can be strengthened via the “less is more” route in the editing.

I was thinking all the way through the film that, if this had been shot in the late 1960s or early 1970s, this central character would have been played by either Charlton Heston or Yul Brynner... because this is exactly the sort of violent, dystopian science fiction thriller that they would have both had lent their talents to... although I’m not sure Heston would have liked the underlying message of the movie. I touched on this in my review of the first movie but The Purge: Anarchy is very much in synch with the story and attitude to specific films like Planet Of The Apes, The Omega Man, Rollerball, Soylent Green, Westworld and The Ultimate Warrior... almost all of which starred either Heston or Brynner, of course (the exception being Rollerball). I guess a late 1970s/early 1980s comparison could also be made via films like The Warriors and Escape From New York. Just a small bunch of individuals trying to survive a night in the city. Always good for a “hang any action stealth/chase sequence you like on it” kind of plot and these kinds of films can be kind of entertaining (although I seem to remember not thinking much of The Warriors when I saw it back in the heady days of “the video rental age”).

While the film is violent, the concept is pushed out just a little bit to include an anti-Purge faction and what I can only describe as a Government “enhancement” group... in that the government are found to be slaughtering citizens wholesale as an augmentation to the purge because they are required to keep the population down. There’s always a reason that Governments pass these stupidly Draconian laws and, while the reasons are left pretty much to your own speculation in the first movie, this one blatantly comes out with the idea near the end of the movie.

The class structure is once again explored, in this one. There’s even a big tip of the hat to The Most Dangerous Game (aka The Hounds Of Zaroff) in that a whole load of people are captured and taken to a wealthy mansion and courtyard area where rich people bid vast sums to hunt and purge on the poor, huddled and, obviously, unarmed masses in a controlled area with the added advantage of the latest state of the art weaponry. Of course, if this sounds too much like shooting fish in a barrel well... don’t worry, it is... but it’s Hollywoodland time here so, you know, I don’t want to say too much about what happens in this scene but it certainly relates to my next paragraph.

The one problematic thing about this movie, which is also very much a hang over from the first film, as far as I remember, is the number of “deux ex machina” style moments where someone is saved from certain death by the intervention of another character or group of characters the audience had temporarily forgotten about. Like the first film, there’s just way too many of these moments in this one but I have to cut it a little slack because I guess there’s more chance of that kind of thing happening when you’re working on a bigger canvas and not confined to fighting your battles inside a small home. I do, though, think these moments do become quite tiresome, repetitive and increasingly unbelievable as the movie progresses to its final conclusion.

However, this is small price to pay for a film which holds, as its central idea, the concept that guns and violence are a bad thing and I am once again amazed that a film which is so blatantly anti-gun law and opposed to “the right to bear arms” is not heavily snipped by the American censors. Sure, the film revels in violence (well, violence in art is quite often very watchable, to be fair) and it does the obvious thing of trying to have it’s cake and eat it in terms of the play off between the violent nature of the film and the underlying message of anti-violence but, as far as I’m concerned, the subtext of the movie, which is reenforced by the action, or should that be inaction, of one of the lead characters near the films denouement, kind of wins my heart over on this one. As far as I’m concerned, this can only be a good thing and I just hope that all this doesn’t go over the heads of a the teenage audience that these kinds of entertainments are primarily aimed at.

The Purge: Anarchy is a nice bit of violent science-fiction that preserves the lineage I outlined earlier in this review without missing the point of some of those films. It’s a much more entertaining and thoughtful, if not overly subtle, tale than its predecessor and if you are into these kinds of action fests then you will probably be into this one. Definitely something I will catch again in the next couple of years.
Posted by NUTS4R2 at 20:30