A Walk Among The Tombstones 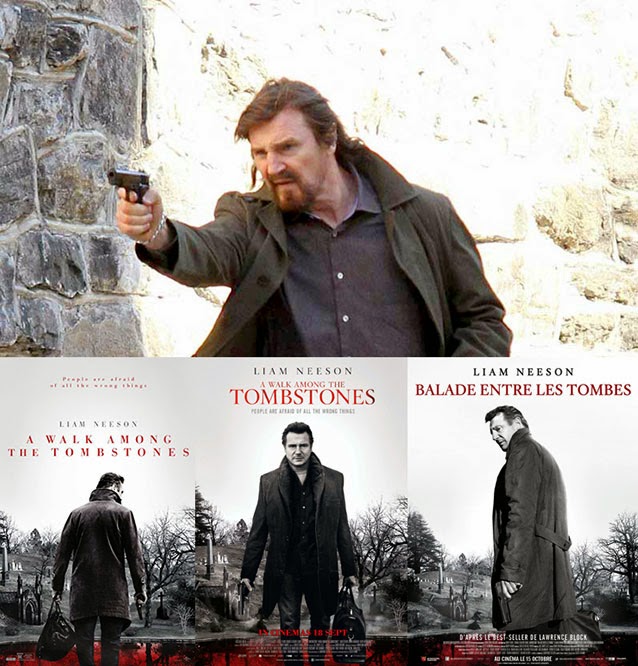 I’ve not seen Eight Million Ways To Die but it’s probably worth mentioning that here because it’s a film which stars Jeff Bridges playing the same character, Matthew Scudder, that Liam Neeson plays in A Walk Among The Tombstones. Nor have I read the 18 books published by Lawrence Block about the adventures of the character on which each of those two films is based... A Walk Among The Tombstones being the tenth in the series. So I guess what I’m saying here is that I can’t pitch this review in the context of any past experience of the character in any previous media incarnations. So as far as it’s success as a faithful adaptation goes... I can’t tell you.

What I can do, however, is point out to you that this is one of the best film noir style thrillers I’ve seen in a long time. It’s not exactly a police procedural movie as such because, certainly, the main character Matthew Scudder, played quite brilliantly and believably by Liam Neeson as a recovered alcoholic, is an ex-cop who now works as an unlicensed “private” detective... but it certainly uses many of the investigative methods, or at least the cinematic shorthand for them, used by both policiers and various other private detective films throughout the years.

When I say it’s a modern film noir I’m not being creative with my words either. This is almost a text book classic noir film with many, if not all, of the main ingredients of the classic noir thrillers of the 1940s and 1950s. In terms of the crisp quality of the cinematography and general mise en scene as well as the grimy, grey moral territory that’s often best rendered through a curiously chiaroscuro point of view, allowing the audience to stand in moral judgement of the dilemmas faced by the anti-heroes of such tales.

The plot concerns one of the big noir themes used almost to oblivion but re-appropriated very well for a film with this kind of tone... revenge.

Liam Neeson’s character is hired by a drug dealer because he believes he has a particular set of skills needed to find the people who kidnapped the drug dealer’s wife, ransomed her for a large sum of money and then chopped her up into little pieces after he’d paid them off. There is no shilly shallying around with motivations here... the dealer makes it clear that he intends to kill them. This makes it a little harder for Neeson’s character to take on the job but some cinematic sleight of hand which is presented to the audience as a kind of male bonding follow up scene to his first interview with the husband is all that’s needed to justify why the less morally flexible (than he used to be) Matthew Scudder takes on the job in the first place.

One of the main ingredients of the standard film noir, the femme fatale or presence of a strong female character in the plot, is curiously absent in this movie. There is really no single female lead in this film, only a few supporting female characters. However, it’s tellingly noirish, I think, that the women and girls in this film are mostly seen as the motivations for the actions of the majority of the male protagonists and antagonists here. If you were feeling mean spirited about it I guess you could say that all the female figures in this movie are reduced to catalysts and obsessions for the men to act out their revenge fantasies. However, the other way to look at it is that the female presence, in a movie mostly devoid of women, is actually very strong and certainly, the way one of those women is viewed in this movie, that of the drug dealer’s wife Carrie, is very much an echo of the way a female presence can be used in a classic film noir.

To explain that last comment, Carrie’s painting on her husbands wall serves as a very visual and constant reminder reminder (the camera loves it) of the woman he has lost and is consequently so obsessed with. His brother, also, has various sketches, paintings and studies of her on his wall and the character almost comes to life in a way just from her painting. This is very similar to the way the portrait of Gene Tierney’s character Laura is used in the first half of the movie Laura, in this respect, although that’s probably all I want to say about that particular classic noir in case you’ve not seen it and I give too much away. Needless to say, there was something I was expecting to happen in A Walk Among The Tombstones because I’d made that connection while watching it, which doesn’t actually take place, I’m happy to say.

What we do get in this film, however, is a heck of a lot of male bonding. There’s even a young teenage character who Scudder, almost accidentally, takes on as an assistant who serves both that function and, surely not coincidentally, acts as a kind of redemption fulfilment figure for Scudder due to certain aspects of a shoot out that went wrong in Scudder’s past.

We see this shoot out at the start of the movie, right after a scene which is used to establish Neeson’s character as someone who is initially unlikeable. This shoot out is probably the most kinetic and frenetically edited sequence in the whole movie and, when we revisit the scene later to bring new information to it which wasn’t revealed at the opening of the piece, it’s then that we see why the young teenage character, TJ, has been introduced into the plot line.

The rest of the movie, including the revisited opening chase and shoot sequence, is shot and cut in a much more sedate manner which really allows the shots to breathe and the actors to perform in either long static shots or slow, languorous camera pans etc. The film never gets boring though and concentrates and distills your attention to the emotional heart of the story so that the revenge motif and the moral dilemmas faced by many of the characters never once seem false or fake. You believe in the people in this and you know something bad is going to happen to a lot of them here before the film resolves itself in a very curious couple of ending shots which are, in some ways, very brave of the film-makers.

It’s also got a very nice score by a guy called Carlos Rafael Rivera that is totally appropriate, never overpowers the dialogue or action, but still maintains a strong melodic presence throughout the whole of the picture. I’m guessing it works okay as a stand alone listen too so that’s a reminder to myself right there to go and order the CD after I finish writing this. The score really helps too, in a shoot out sequence at the end that is a stop and start counterpoint to some of the “steps” of a recovering alcoholic, acting as a kind of audio glue. At least I think it was used in that sequence... I’ll need to watch it again. I think this particular sequence was almost a misstep from the director but, since there’s a couple of extended denouement scenes at the finish of the movie, it didn’t completely spoil the tone of the rest of the film for me and I’ll cut them some slack for that. For all I know they deliberately needed to slow the sequence down for some reason, in the final cut, and I can appreciate the metaphor as it’s presented, at least.

Not much else to say about this one. If you like strong, gritty, noirish movies with characters you can believe in and a high level of both emotional and physical violence at certain points then you can’t really go wrong with A Walk Among The Tombstones. Neeson’s performance is superb, as you would expect from an actor of his calibre, but so is everyone else in this and the dialogue is pitch perfect. Seriously go out and see this dark little thriller while it’s still showing.
Posted by NUTS4R2 at 19:33