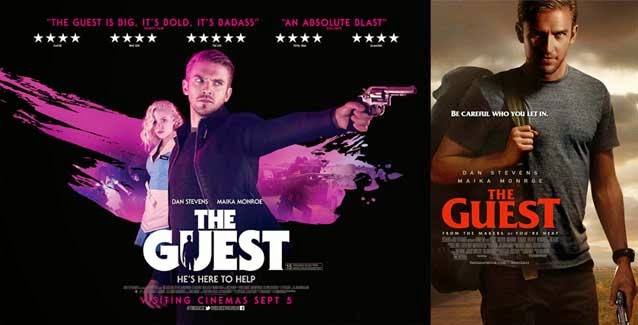 I saw the trailer to this movie in cinemas a few weeks ago and remember being curious as to whether the title character of this movie was supposed to be a hero or a villain... or something in between an anti-hero and a villain... but decidedly unintrigued enough to bother finding out either way. It was not a movie I’d planned on seeing.

However, fate had other things in store for me as I was going to work one day and I was passed by a red, double decker bus stopping opposite where I was awaiting my similar ride into work. The bus side advert was a poster design for The Guest and, it has to be said, this was instantly appealing. It looked like someone with the psychedelic sensibility of a budding Mario Bava had got the purple paint out and swirled it around and used it as window dressing for a completely different movie to the one I had been expecting from the trailer. This poster was beautiful and I decided then and there that any director or studio who had let this brilliant throwback design out of the gate to sell their movie deserved my backside on a seat in front of their work at the very least. Some good “tweet of mouth” on the internet over the next few days solidified that idea for me.

Now, I’ve not had great times with the director, Adam Wingard, just lately from my experience of his framing film for V/H/S (review will be coming either September or October), although his short for the original The ABCs Of Death was quite cute (again, review to follow). I might have decided against going to see it if I’d have taken careful note of the director’s name and all I can say about that is... thank goodness I didn’t take note of the director’s name.

Adam Wingard’s The Guest is a really nice little movie which has a kind of upending of audience expectations of the characters they are watching. Or maybe upending is the wrong word because, frankly, you are on your guard right from the word go that not all is what it seems and then, rather than overturn your perception of events just the once, the director kind of plays with the tropes of what is, essentially, the set up of an old style American Western and keeps the audience guessing as to both the motivations and integrity of the character all the way through.

And it’s quite a neat trick to do too because those two qualities, which are usually perceived as being mutually inclusive good things in a character, are what gives this movie its edge and they actually play against each other to get to a point where you, the audience, have to make your own judgement call on both the intentions of David, played very impressively by Dan Stevens, and the ultimate consequences of the collateral damage in the movie by that character’s direct actions.

The basic set up is an ex-soldier returning from service in the Middle East, who goes to keep an eye on/help the family of his best mate over there, who was recently deceased in service. He stays on at their house for a few days and slowly goes about fixing, in his unique way, the various problems of the remaining members of his friend’s immediate family... the mother, the father, the other son and the daughter. But there are signs, mostly conveyed through Dan Stevens' reflective facial expressions and, sometimes less than subtlely, with a sinister barrage of musical sting, that all is not right behind the brain of The Guest.

In a way, it’s kinds like Shane filtered through the government shadow group paranoia of something like The Bourne Identity and then, when it gets to the last act, just going off the rails a bit. To say more would be to give away the main hook of watching the movie and I really do want to make this review as “spoiler free” as I can. What I will say though is, it’s not a cut and dried situation and I’d hazard a guess that if you asked a hundred people who had just watched the movie whether or not the title character was a hero or a villain, you’d probably have something like a quarter to a third of them answering in direct opposition to the remaining percentage of the sample.

The film seems quite low budget. It’s not wall to wall action, which is maybe what an audience may expect form the trailer but which is, frankly, all the better for not being that kind of Hollywood style concoction. And it also turns out that Wingard and the writer, Simon Barrett, have that sense of timing that a lot of the current talent in big budget action movie making has kind of lost... the ability to pace the movie and lead up to the set action pieces with a certain amount of the tension/release/build and then build some more aspect which make certain films with an action/thriller prospect in them so good to watch when they combine all the ingredients in the right way. Simon Barret obviously recognises just what the ingredients should be here and Adam Wingard, it turns out, is a remarkably good cook with this kind of recipe.

The other ingredients are a cast who all know their game very well and play their, sometimes stereotypical characters, with the kind of enthusiasm for the “quick character sketch” that helps you both understand the characters and sympathise with (or hate) them speedily. Which is handy in a movie like this. There’s also a nice score which mixes electronica with the occasional pop song (less keen on the songs but they certainly aren’t inappropriate) and helps heighten the tension and action expectations in key areas of the movie... and, yes, I am annoyed I couldn’t find a CD release of it on Amazon.

My one slight criticism is the gun selling sequence in the film... which has very minor shades of Taxi Driver and The Good, The Bad And The Ugly in it and which, for me, becomes the one on-screen sequence which doesn’t quite glue together with the rest of the narrative in terms of a central character who wants to never be a blip on anyone’s radar. It does, however, get the story chugging into high gear for the last third of the movie and there could be justification for this if we knew a little more about the background of the character than the “absolutely essential minimum” that we are given here (which means that it can all be further explored should any sequel, arise, of course).

And that’s about as far as I’m prepared to go in terms of talking about The Guest if I want to keep it spoiler free. The film will probably be seen as a bit of a genre bender for some audience members and there will probably be another section of the audience who won’t see it like that at all... which is pretty good because it gets people talking and exploring the ideas presented here, the chief one for me being the military mind of doing what you are told you are supposed to be doing in any given situation as opposed to making moral judgements on a set of situations... which is not something that’s explored in movies often enough, it seems to me.

So, yeah, The Guest. If you like slow burn thriller and/or early American Westerns and want a good night out at the movies with a low budget entertainment that resembles those rare times when you rented a “straight to VHS” tape in the 1980s and actually discovered a bona fide, underrated classic as opposed to the usual tape fodder you would get in your local off licence or newsagent, then The Guest is definitely something you should consider inviting into your life for a couple of hours. It’s good fun.