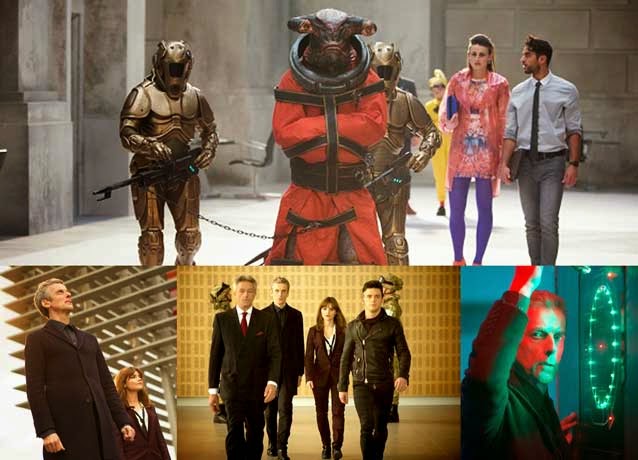 Well after last week’s very strong episode (reviewed here) I wasn’t expecting too much from this week’s episode and it pretty much does what it says on the tin in terms of what the trailer made it out to be. That being said, I have to say that Time Heist was a bit of a “miss” over all and not one of my favourites of this season.

There were some positives, of course. The various actors who made up the team of bank robbers, including Peter Capaldi and Jenna Coleman themselves, of course, all worked very well together chemistry wise and this installment was certainly more than up to scratch in the dialogue department, if nothing else. That being said, I do think this version of The Doctor is a lot dryer than anyone has been used to for quite some time and I can see this being a possible way of losing a fair amount of the younger audience it has to be said. Also, I fear that the segment of the audience who jumped on purely from when the series was rebooted with Eccleston’s incarnation of The Doctor may find this one a little less flashy than they’re used to and I can see this series beginning to really lose some traction ratings wise if they’re not too careful. Added to the fact that the new series is now going to be broadcast much later than usual from next week onwards could be a very strong negative when it comes to the future of the show, I suspect... although the recent cinematic simultaneous broadcasts of certain episodes have done wonders at the box office so maybe that will help counteract things in some way... who knows?

Another of the positives is the chocolate box full of references to series' gone by in numerous sequences which included some quotes from the more recent series, the fleeting appearance of the comic book character Abslom Daak, Dalek Killer (from the days when I was young enough to be reading Doctor Who Weekly, back in the very late 1970s) and a more serious cameo from the memory worms which were used to much more comic effect in the Christmas Special The Snowmen (reviewed here). This was all very postmodern and nice for the fans of the show, of course.

On the other hand you had a plot which was far too clever for its own good. The four people sent to infiltrate the bank which is being robbed... a robbery which turns out to be something both less and more of what we were expecting... are there of their own free will and, once we’re introduced to the other main player in this, Keeley Hawes* as the owner of the bank, we’re left to really only two people who the architect of the whole operation, known as The Architect to protect his/her identity, could be. And if you haven’t figured it out by the end of the show then perhaps you weren’t paying attention. I’m not going to put any spoilers in here people but, seriously, you will have figured it out long before anyone else in the episode does. The only real surprise, and you might have already had your suspicions as to which character this would involve, is what is in the bank vault to bring these people together. I’m willing to bet that most people would have seen that once coming too though, I’m afraid.

And that’s the trouble when you’ve got a short amount of time for a story like this. If this had been a two or three parter, you may well have been able to conjure up enough different distractive sub plots to keep the audience away from the main nub of the story on which the plot hangs.... and this one doesn’t quite fool anyone enough, for long.

On the other hand... it’s fairly well put together, it’s nicely paced, it doesn’t really lose traction too many times (okay, it does drag in a couple of places but it certainly doesn’t dwell or wallow in the dull bits too much) and it makes use of a limited amount of sets shot from different angles and with different coloured lighting, from the looks of it. It was probably one of the cheaper episodes I would guess.

So, you know, it kept itself ticking along fairly nicely and there’s not a hell of a lot to grumble about other than, you know, being really obvious in places... they just happen to be the places that matter in terms of the actual story telling on this one. Not an episode I’d recommend as something to start on but that’s the way it always goes with a weekly television show I’m afraid... you get your hits and your misses.

Now then, next week’s episode promises to be a bit of a humdinger (and I really hope I’m right on that one). However, now it’s being put in a much later time slot I’m afraid I’m not going to be staying up half the night reviewing it after each episode for a post the same day. I don't mind doing the late nights but half my brilliant audience of readers have gone to bed by the time I'd get my post up. So from now on until further notice, my reviews of the new Doctor Who episodes will probably start showing up on Sunday mornings instead. So hope that’s okay with any readers who have supported me in my past reviews of the shows and who are here specifically for my Who reviews. Don’t worry... I’m not giving up on the series yet, I think it still has a whole heap of potential, I just need a time machine to get my reviews out on time. So keep an eye out for the next Doctor Who review next Sunday morning. Hope you keep reading too... I’m always grateful for having readers of this blog. Makes it all worthwhile. See you soon.

Addendum with spoiler: See, this is another reason why it might be better for me to publish these Doctor Who reviews on a Sunday morning from now on. Had a bit of an epiphany about last nights episode when I woke up this morning. Two things... the goodbyes to the Doctor's new friends, with special powers, was an extended sequence where they'd been travelling in the TARDIS for a while and took far too long than was absolutely necessary or normal for an episode. Maybe they wanted to stamp those characters, and their particular talents, into our minds for much later in this series so The Doctor can use them in whatever the end game is this time?

Similarly, this episode set up the concept that people could appear to die (and I'm sure most viewers knew they weren't really dying right from the first time it happened... it was just too obvious, again) when they were actually being teleported. The devices to do this could be used in similar ways of course... maybe to pre-arrange the teleportation of a person at the moment of their death? Hmmm... haven't we seen this before somewhere? Think maybe Missy or, perhaps, even The Doctor himself playing the Missy game? We shall see but it seems an awful lot of "deus ex machina" style plot devices were being sown in last night's episode. Something to think about, perhaps.
Posted by NUTS4R2 at 21:18