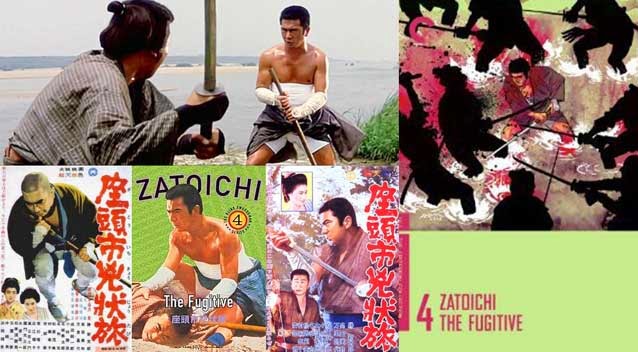 Warning: Yeah, some spoilers on this one too.

Here we are on the fourth of the Zatoichi films already, crammed into the same year and shot by the same director who did the previous movie, New Tale Of Zatoichi (reviewed here). Curiously enough, the way the shots are designed and function appeared, at least to me as I was watching it, to be the work of another director entirely... or perhaps a different cinematographer? It’s certainly not the same kind of approach this director took previously, although he does still exhibit a fondness for slicing up the scope frame into sections.

The film starts boldly with a shot of the sky which is quite peaceful looking, until Zatoichi walks straight into the frame from the side. This is not long shot, either, it’s quite up close and “in your face” with the character, so the effect is quite unsettling and must have been terrific when shown at cinemas.

We then have a nice change of pace for a Zatoichi movie in that, instead of gambling his way into some money to keep himself going, he here volunteers to be next challenger in a “who can beat the current champion” style wrestling match. Of course, his enhanced senses never fail him and he leaves heavier and more energetic victims in the dust of their defeat while he collects his cut of the money.

As Zatoichi is enjoying a quiet, riverside siesta, a man who is obviously ignorant of his swordsmanship skills... attacks Zatoichi. Our hero tries to not get into a fight and offers ample chances for the man to back down but, in the end, Zatoichi slays his antagonist. As the man lays dying, Zatoichi finds out the name of his mother and takes her the reward money he finds has been offered on his own head. So here we see a trend beginning in the movie which relays to us that Zatoichi has now become both famous and infamous, depending on the side of the coin you are looking at. Dealing, as it does, with the idea of the tales of Zatoichi's exploits being retold in taverns and making him a kind of working class hero to various villagers. And, of course, his reputation with his sword also brings unwanted trouble from the constant amount of people who want to pit their own mettle against his.

What’s interesting is that the story cunningly sets up a constant threat to the lead character by putting a price on Zatoichi’s head, so that an action sequence can pop up at any time to change the pacing of the movie when required... but then doesn’t rely on this as the sole cause of conflict in the narrative. Instead, it shows us the side of the hero who is left, once gain, dealing with the consequences of the people he’s slain and the guilt he feels over that, especially when he was obviously attacked by someone who had no idea of the measure of the adversary he faced.

All this is done to some mighty fine camera work and shot design, it has to be said... the director splitting the shots quite strikingly in a horizontal manner. Indeed, most of the time, he deliberately subdues the vertical parts of the shots, strangely enough. Knowing the standard construction of the building interiors in this kind of cinema, this couldn’t have been the easiest task but he does this again and again throughout the movie by putting groupings of people across the obvious vertical patterns, in order to neutralise them somewhat, it seems to me. He also splits this into diagonals but, again, long horizontal oriented angles which cut nearly the entire widescreen frame into two sectors... top and bottom Often, one of the sectors, horizontal or diagonal, is deliberately just a large block of space to focus you on the area of the screen where something is happening and to highlight the importance of certain conversations or key bits of information etc.

Another interesting thing the director does, and this is even true at the very start of the film in the description I gave in the second paragraph, to some extent, is to have some pretty short establishing shots and then either force a different perspective into the shot, like in that opening sequence, or just cutting away immediately to extreme close ups of the characters within the scene. This can be extremely disorienting at times but... also, fun.

This director certainly loves playing with the juxtaposition of shapes and elements within a frame. There’s a beautiful shot where Zatoichi passes someone going up a flight of stairs and they both stop for a moment, directly next to each other, without looking around. Seen in close up of their profile, their bodies form a single mass as though a single trunk is sprouting two heads, each head looking outwards towards the opposite edges of the screen... before it cuts to a perfect reverse shot of exactly the same thing. Ingmar Bergman often used to play with bodies and faces within frame space in his films in this manner and he would have appreciated this particular composition, I’m sure.

Camerawork aside, this film has some classic moments of interest in it.

There’s a nice little moment where our blind protagonist throws a dice into a man’s saki bottle. He then flicks his sword and the bottle slowly falls apart from a vertical slice which splits the bottle into two halves and splits the dice in the bottle in half, all without hurting the man, who is still holding the bottle. This is where the Zatoichi films start to get a little over the top with their depictions of the lead character’s mystical sword skills... and why not? It's all great stuff and a welcome change of pace to some of the more poe faced characters inhabiting some of the more traditional chanbara movies.

The fight sequence at the end really piles on the sword fodder as a trapped Zatoichi begins a brilliant fight that starts in a deserted house, then continues outside, then into some water (a nice bit of sword and splashery here), then into some long grass and then back into some sand before Zatoichi takes on the lead strongman (which most of these movies seem to have). Actually, the samurai in question bears a remarkable resemblance, to these Western eyes, to a young Toshiro Mifune when he was appearing in films like Yojimbo and Sanjuro, although it would of course be several years before Mifune would guest star in this series of films to go head to head with Shintarô Katsu’s beloved blind swordsman.

In the final fight, the new guy is almost a match for Zatoichi and, in a rare display of mortality for the Zatoichi character, nearly defeats him. In fact, he even breaks Zatoichi’s sword cane so it’s useless, something which I still think contradicts the continuity of a later film in the series (I’ll let you know and shout it out in no uncertain terms when I get there again). However, Zatoichi isn’t finished yet and, as the big guy comes in for the kill, Zatoichi strikes with a small dagger he has as a hidden extra in the top of his cane... something which I don’t seem to remember seeing in Ichi’s arsenal either before or after this film, to be honest. The film is a little more graphic in a way, at this point, as the up-close-and-personal killer thrust leaves Zatoichi’s brow spattered with his adversary’s blood. The films kinda leap between graphic goriness and more subtle approaches, almost randomly, throughout the entire run of films if I remember, and this certainly isn’t the most graphically violent of the Zatoichi movies by a long shot (Takeshi Kitano even stole a most memorable piece of violence from one of the later films for his own take on the character, decades later, if I’m remembering correctly).

The film is well scored by series semi-regular Akira Ifikube and also very leanly spotted*, like a lot of Ifikube’s scores. This allows him to really emphasise certain points in the movie, such as this end fight where Zatoichi is wounded in the arm to a flurry of Ifikube bombast on the score. A kind of protracted musical sting that works very well. And, of course, that means the four note Zatoichi theme, in a slightly different variation, gets a work out too, throughout the course of the picture.

What more can I say? Zatoichi The Fugitive is a classic Zatoichi movie and we even get to hear some of his one-line wisdom... “Life's dirt sticks to everyone” although, to be fair, it really doesn’t go down too well in the context of who he says this to in the film. Definitely a great watch for Zatoichi and chanbara fans alike. One of the best in the series.

*Spotting is where a composer will sit down with someone, usually the director, and work out which parts of the movie will be scored, where and when the various cues for each section will start and finish, and discuss other things like the intensity of the music and its purpose in a scene. Quite often, and Hollywood composer Jerry Goldsmith was a master of this, it’s as much about working out where you don’t put music, as where you do.
Posted by NUTS4R2 at 19:53