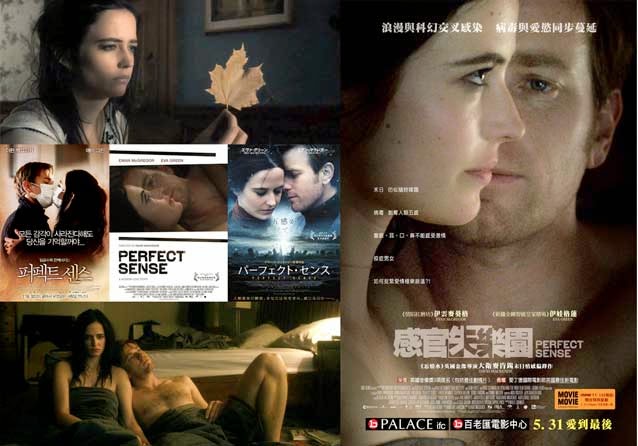 Five To One Odds

Warning: I guess there are spoilers here but they are kinda given as part of the trailer, for the most part.

Perfect Sense is another of those films which was totally off of my radar until @screamqueenlauren on twitter said I should take a look at it (so thanks for that Lauren - see her stuff here). It doesn’t seem to be that well known a film and I don’t remember it getting much, if any, of a cinema release over here... which is a pity because its a nice little gem of a movie.

Set in Scotland, the film stars two very strong actors in the lead roles... Eva Green as a scientist, Susan, and Ewan McGregor as a chef, Michael, who works in a restaurant where the back entrance is directly opposite the floor below the windows of Susan’s apartment. These two main protagonists, and the opening salvos and triumphs of the start of their relationship, gives us the window in which we watch the main, science fiction premise of the movie, affecting the lives of everyone on the planet as mankind tries to survive the onset of a new and mysterious disease. And, likewise, the use of a sci-fi plot idea allows us to explore the limits of a relationship to a degree which it wouldn’t have been possible to reach without the basic “what if” element of the story... which is the key thing that good science fiction allows us to do, of course. Stretch real life ideas and emotions beyond their logical conclusions which then allows us to at least have the illusion that we can understand them better.

The central idea of the movie is that there is a virus or disease or possibly something even more mysterious which, slowly at first, begins to strip the population of the entire planet of each of their five senses in both a specific order and, much to the frustration and anger of Susan and her colleagues who are trying to find out what’s going on, without any discoverable way of isolating it to even try and stop it. In this regard, Perfect Sense behaves very much in the way that most post-George A. Romero zombie films do. That is to say, that no explanation or reason is given for the devastation caused by the central premise even if, as in this case, at least one of the main protagonists is actively engaged in finding one.

The film is at once beautiful and powerfully frenetic in places. Sometimes utilising a style such as a slow moving, very precise camera movement with very specific framing and then pitching it against a hand held style of looking at things. For example there’s a beautiful couple of shots of Eva Green in her apartment early on where her room is split into rectangular planes by various bits of furniture to highlight her in her immediate environment and, as she walks to her windows, the reverse shot frames her in the same rectangular space on screen as that previous shot, but using the verticals and horizontals of the windows as the framing device. There’s even a nice but, perhaps, obvious tribute to Ingmar Bergman’s eye for composition in one particular shot of Green and McGregor in bed.

Shots like this are countered by an increasing amount of hand held work which is sometimes slow but always exploratory. The kind of camera eye that allows the audience to feel like it’s reacting voyeuristically with the characters, adjusting slightly to more fully integrate with something that might then become the focus of the shot or a specific scene. Neither of these stylistic approaches are in any way new, of course, and nor is the director’s intentions to make the two styles work side by side somehow... but the fact is, he does manage to mix these different approaches very well and without any jarring moments when the juxtapositions happen. So my hat off to him for that (not that I wear hats, to be honest).

The film is split into a number of sections with a voice over narrative by Eva Green that lets you know what is going on all over the planet, either by direct account or poetic metaphor, usually a mixture of the two. This is accompanied by montage sequences, most of which look like real found footage, newsreel stock shots purchased from a library which have just been edited together, showing the world reacting to the situation in various ways. This is often accompanied by am intricate musical cue and it really gives you an idea of the environmental dangers in which our dashing young couple find themselves. Acting like super-duper, establishing shots for the central idea and it’s course of devastation throughout the movie, these sequences reminded me of the Newsreel sections of John Dos Passos USA Trilogy of novels (specifically, for me, The 42nd Parallel) which achieved a similar effect as a counterpoint to the specifics of the main text, but with words printed on paper as opposed to the images and audio narrative specific to the medium of film.

As the story progresses, both audience and characters alike begin to realise that, for the general population of the planet, each devastating loss of one of the five senses is heralded with a strong, very specific, emotional reaction experienced by everyone. In fact, Susan leaves Michael at the onset of one of these emotional highs (or should that be lows), this one specifically causing a lot of anger and the desire to lash out at those closest to you, and then she experiences exactly the same thing when she goes back to her lab before, like Michael, she goes deaf.

The thing is, there’s a nice bit of subtext to the condition the disease leaves the human race with after each emotional battle for acceptance of their new disability (it’s not that blatant but it’s not hiding itself either). This manifests in a natural coping skill which kicks in and allows people to substitute a different aspect of a sensation in place of the one that was there. For instance, when everybody loses their smell, Michael’s restaurant puts extra salt and sugar in the food so people, regardless of the fact that they can’t smell the food, will come and eat it anyway. Similarly, when everyone loses their taste, people still go out to eat but they concentrate, as in a review of the restaurant read out in the film, on the texture and colour of the food itself. These surrogate sensations manifest themselves in the most interesting ways throughout the running time, such as a scene where Susan and Michael are sharing a bath and they start eating a bar of soap and some shaving foam. And when everybody goes deaf, people still go to watch bands play live, but so they can feels the vibrations created by the various instruments on the speakers in place of listening to the music itself. These aspects of the flip side of the premise are never overplayed and are there as background almost, to the situation on hand so... like I said. Nicely done bit of subtext about the human beings adaptive skills.


The film is beautifully put together and the apocalyptic nature of its ultimate destination starts off by creeping in slowly and then rushes in, as Eva Green’s character compares the onset of the ice age and its effect on the wooly mammoth, leaving a trail of devastation and more things to endure for the human race in general. There’s a point in the movie where absolutely everyone in the world goes into an eating frenzy almost simultaneously before being robbed of another sense... it’s at this point where things start to get really scary and you look at it and you start to speculate what the chances of surviving such an unreal proposition as this would be. And when you start thinking like that you know the film has really got under your skin and, once more, you fear for the future of the young couple burning at the heart of the story... and when a film does this to you then you know you’ve seen a good ‘un.

So not much more to say about this one. Perfect Sense is an almost perfect film and I even liked the ending with it’s sly way of plunging the audience into the same fate as the viewer, it’s coda which then leaves you puzzling as to how that structure of the film even exists in this manner in terms of the characters and, ultimately, the sucker punch when you start to figure out what could possibly be a way forward for the future of the species after the end credits roll. A thoroughly effective and emotionally draining watch which I would recommend for anybody in love with cinema. Check it out if you get a chance.