The Keeper Of Lost Causes (Kvinden I Buret) 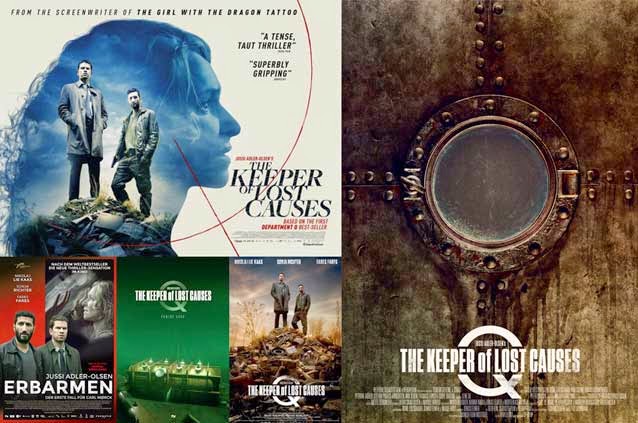 Okay, I’ll come clean and confess that the main reason that I went and saw this film is because my local cinema rarely ever gets films which aren’t made in either the US or, at a push, the UK. Since this was a rare exception to the normal programming habits of my local multiplex... and since films with subtitles barely even last a week around my local... I thought I’d get myself down there and check this one out while I had the chance.

I would be lying if I said that the marketing spiel revealing that the screenplay was written by the person who did similar duties on the first movie version of Stieg Larrson’s The Girl With The Dragon Tattoo in any way drew me in. I’ve seen (and reviewed on this very blog) the various adaptations of Larsson’s Millennium trilogy and found them all lacking and pale when compared to the original novels. The only plus side of that, in regards to this particular film, is the fact that I’ve not actually read the book this movie is based on, coming as it does from a series of novels by Jussi Adler-Olsen about a police detective and his assistant who work in “Department Q”. I’ll get to just what Department Q is in a minute.

The Keeper Of Lost Causes is a great little thriller with a strong opening involving an incident that, when all is said and done, relegates our main protagonist, Karl played by Nikolaj Lie Kaas, to being assigned a quiet basement job in the newly formed Department Q. Said department being just Karl and his new Arabian assistant Assad, played by Fares Fares, who makes his coffee far too strong for Karl to stomach. Their job is to go through every old, desperate cold case on the books, at a rate of three a week, read through them, write a two page report and then close the case. However, Karl is actually a very smart detective and it soon becomes apparent that he and Assad are on the trail of a killer and start to seriously investigate the case of a missing girl who supposedly threw herself from a ferry, with a suicide verdict on the record. But like Karl says... who takes their brain damaged brother on a ferry with them if they’re just going to kill themselves?

If this plot seems a little clichéd and run of the mill... well, alright it kinda is. But it’s the artistry and entertainment value of the film which puts it squarely at the top of it’s game compared to many other TV shows and films going down the same route. Couple of things to point out here.

The characters are great. They’re not too thinly drawn and Karl and Assad have kind of a chemistry between them which makes the journey with them an enjoyable one. I particularly found myself identifying with Karl since he never smiles and is often perceived as being miserable around his colleagues, none of whom want to work with him other than Assad (and I’m not all that sure about Assad either, at least at the start of the movie). The brain damaged brother of the missing girl is also a triumph in acting and his presence and the way he interacts with those around him, gives further insight into the personalities of our main protagonists.

Another thing is the way the story is presented. We have the present, which is Karl and Assad investigating the cold case which they have unofficially opened and we have the back story of the missing victim, as we slowly being to unravel what really happened to her and it’s the crosscutting between the two different ends of the story that makes things interesting. Because of the passage of time, it doesn’t take long for the back story of the crime to start catching up to present day and as the two time zones get closer and closer, we begin to be uncertain as to whether the girl in question actually did eventually die or whether the events we are seeing transpiring in some sections are up to date... and the only way the audience knows this is as both parts of the story climax at the end of the film... so it’s a pretty suspenseful piece of film making because, after you see what the girl goes through in the course of her story, you really want her to still be alive by the time our much maligned (by their own people) detectives come onto the scene. And I’m certainly not going to tell you what happens here because I’m trying to make this review as spoiler free as I can.

The other thing which sparked my interest as I watched the film was the fact that the film has a certain grittiness and hard edge to it in content, but it doesn’t match that rough texture in either its art design or the way in which shots are filmed and edited (other than for a layer or two of designer grime where appropriate). Everything is very precise and fluid in the world of this movie. Compositions are nice to look at and there’s no hand-held shaky cam to emphasise the harrowing nature of some of the scenes. This is, of course, as valid an artistic choice as any other and it certainly pays off here. The shots have a very clean feel to them and it’s perhaps the contrast between the nature of the content of some of the story and the sturdy, even conservative, mise en scene that ensures the story packs such a wallop in a few scenes.

Whatever the reason, the film works for me.

It’s technically a part of a sub-genre of cinema which has been labelled by the current crop of cinephiles as Nordic Noir. Now I don’t really like labels such as these. I find standard genre labels problematic for the most part so sub-genres such as this are not my favourite thing. That being said, there is a steady movement of loyal and passionate people watching this stuff and I have to say that the few I have seen/read which could be compartmentalised with this kind of stuff has been pretty good. The cynic in me says that’s because the UK and US companies are only willing to buy the cream of the crop from these countries, and I guess there’s something in that, to be sure. Whichever way you cut it, though, it’s very much a popular flavour of literature/cinema and TV culture at the moment and worth exploring if you get a chance. Certainly, The Keeper Of Lost Causes is a great police procedural thriller and I’m pleased to say, since this movie is already two years old before it even got a cinema release in this country, that the first sequel starring the same two actors in the lead roles is already being filmed this year. Hopefully we’ll get that one released over here a lot quicker than we got this one.

So there you have it. A strong movie which might even make me go and seek out the novels, if I can find a decent English translation of them. Certainly something lovers of mystery and detective movies will want to see, so its a hard recommendation from me. And if your love of the mysteries of Nordic Noir are not sated by this movie, look at Andy Lawrence’s website Eurodrama (Nordic Noir and Beyond) here http://eurodrama.wordpress.com/ for loads of information about the kinds of stuff you should be checking out if you like stuff such as this.
Posted by NUTS4R2 at 19:48