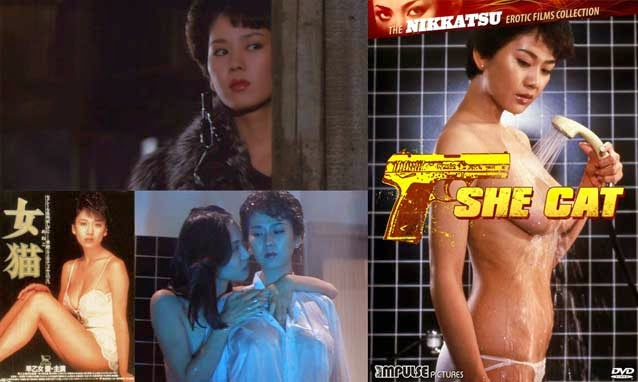 Warning: There will be slight spoilers... but it's not really the kind of movie where you'd worry about them, to be honest.

Hmmm... you know it’s not very often I bother looking up information on a film before I review it but, in this case, I really wanted to because I suspect there’s a rich, historical legacy lurking behind this movie... however, it turns out I could find out pretty much nothing about this one on the internet. I even had trouble finding it from the title on the DVD at the IMDB and, when I did find it under its alternate name of Meneko, there was absolutely no information whatsoever about it on there other than to give some of the cast and crew. So please bear with me and forgive me if I miss some important points out.

I was primarily lured into ordering this one because the cover showed a naked lady showering with a big “gun logo” stamped over her on the artwork. All I need is a girl and a gun... Godard would approve, I think.

So this isn’t quite what I was expecting because this film has a very intriguing premise, about an ex-killer, the She-Cat of the title, who now runs a “clinic for abused women” with her lesbian lover. She then becomes embroiled in the affairs of an ex-acquaintance from her shady past who has sought her out because she is being followed to be silenced by the people who she thinks killed her sister. Her sister, it turns out, has been missing for a while but her own job involves reconstructing faces of recovered human skulls and she soon realises that the one she is working on used to be her sister. All kinds of mayhem then ensues... as she and She-Cat try to solve the mystery. But does She-Cat really know the difference between her friends and enemies in this convoluted plot?

Well she may not get the chance to because pretty much every time the plot seems to get really interesting, everyone stops to have sex with somebody. It’s the kind of soft core eroticism you would expect from Japanese cinema, especially with such a well endowed female lead who is the epitome of buxom, but I have to say that all this rampant lovemaking at the drop of a kimono means the story and action of the film really suffers. It also suffers, of course, from that well know Japanese trait of erotic and pornographic cinema... the curse of the hidden genitals. That’s right... these days it’s a strange mosaic effect and, back then, it’s all blurring of male and female “below the belt” parts with an effect that looks like somebody has gone overkill with a digital vaseline resembling a lens flair on acid in some scenes. I’ve never understood why Japanese films of this nature are happy to depict some of the most gruelling and transgressive acts of a sexual nature ever captured on camera but almost always fall shy of showing someone’s genitalia. This seems an odd cultural trait but, hey, when in Rome... or when in Roman Porno in any case.

The film is competently shot, well edited and with a soundtrack which I totally forgot but which means it’s probably more than appropriate to the on screen antics and shenanigans of the cast. There’s less sex on offer than you might expect from a film of this type but, when those scenes do come, they are fairly long and, well, like I said... they tend to stop the action dead for a while.

The film also includes a betrayal of sorts from one of the lead protagonists who you thought was on She-Cat's side... well no I didn’t actually, I saw it coming from a mile off, but lets pretend I didn’t because I’m being charitable here. The ending scene, however, feels really tacked on and out of place. It’s very strange because the film takes you to a logical conclusion and point of closure with the characters and then, from out of the blue, the main male romantic interest is shot down in the streets in front of She-Cat for... well, for no apparent reason. Why the hell is there any kind of revenge payback from the bad guys... all of whom I thought had been taken care of? I love bleak endings as much as the next person but this one really felt kinda added on just for the sake of giving it a downer at the end. It has no real logic in terms of the story, as far as I could see, and so I was somewhat puzzled by the abrupt end credit immediately after this had happened. What was that all about?

So there you go. My first movie in the Roman Porno category was not a great success but I did appreciate it one some levels... although certain things left a lot to be desired. Not sure if I’d recommend it over the more action packed and exploitational Pinku Violence movies that I have enjoyed in the past but it’s certainly a starting point. Not sure if I’d watch any more although, now I come to think of it, some cheapies I bought from Fopp because they looked interesting might very well belong to the same category for all I know. So I’ll let you know on that one. She-Cat is not exactly the best Pinku I’ve seen... but I have to say it’s certainly not the dullest either. Give it a go if you like large bosomed Japanese women in showers, would be my best advice on this one.
Posted by NUTS4R2 at 19:08