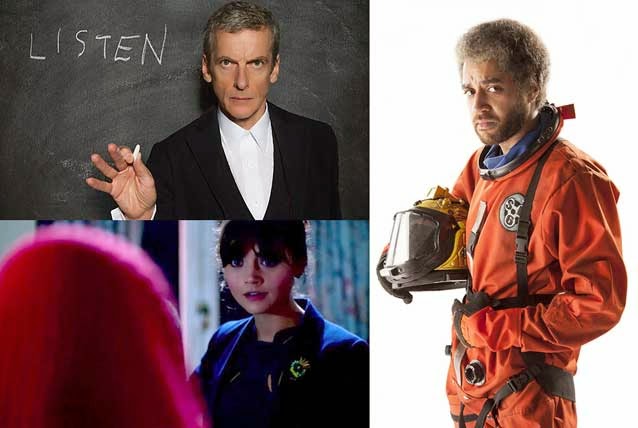 Warning: Yeah, they’ll be some basic spoilers in this one.

Okay, so this is good.

Best episode out of what has been a mostly mediocre bunch for this latest series of Doctor Who, I reckon. And saying that, we’re only four episodes in so there’s plenty of room for them to dazzle us further but this one goes into the category of the most genuinely nicely done Doctor Who episodes in a while.

Starting out with the age old “there’s something lurking under the bed” premise which has been with us as a kind of mutual “race fear” since before we can remember, the episode builds on this basic fear and takes us into some very interesting territory. It also does what most of the best of the Moffat-era episodes do... which is, of course, build us some nice set ups while simultaneously pulling on the strings of old threads and letting the mystery inherent in the show come into the foreground.

The basic premise is that The Doctor is playing games with himself and wondering just what kind of creature has perfected itself to be the best at hiding. Answer... he doesn’t know, but he’s about to do some research involving Clara, as he intercepts her half way (as it  turns out... gets a bit timey-wimey) through a disastrous first date with the possible future companion who we met a couple of weeks ago as a teacher at Coal Hill school... Danny Pink. However, when The Doctor hooks her into a psychic link with the TARDIS so it can take them to a destination feeding off a specific “under the bed” incident she gets distracted by what she thinks is a phone call from Danny.

Let me pause here and say that it couldn’t have been a phone call from Danny, as we all assumed it was, because she rejoins him later before he would have had the chance to make that call... remember. So who was it on the phone then? Possibly the same personality that keeps trying to bring Clara and The Doctor together at important points? Maybe. Probably. We’ll see when they try and tie some of these things up later, I guess. At the moment, though, it doesn't matter because that's who she was expecting to be on the phone.

So anyway, where was I? Oh yeah. It starts with the “thing under the bed” premise and, for a good ten minutes or so, is a genuinely scary episode which is bound to give the kiddies nightmares I suspect... however, it kind of loses its scary bits pretty quickly, which is a shame, and jettisons them in favour of being really interesting and building up the mystery which starts here as...

... so Clara gets distracted by the phone call and instead goes to a “thing under the bed” incident with her date as a young boy. After she and The Doctor vanquish the thing and The Doctor inadvertently sets ex-soldier Danny on his future course to being a soldier... well they both kind of screw him up by accident as a kid actually... Clara then goes and has another disastrous part of her date before being brought into the TARDIS again by... Orson Pink. A time traveller found by The Doctor at the end of time who might even possibly be one of her future grandchildren... at least that’s what the mystery wants us to think right now, I think it all might be a trap... and the next stop is... the end of time. Where The Doctor lets the creatures into the spaceship Danny was in and almost lets them into the TARDIS. Not that it matters, of course, because there's already one of them in the TARDIS since the start of the episode but everyone, audience and writer alike, seems to have forgotten about that little fact. But anyway, moving swiftly one, Clara takes another stab at psychic piloting while The Doctor is unconscious.

Bringing her to a place which we can only assume is Gallifrey in the past... and I’m really hoping that the writers are allowing for the fact that Gallifrey can’t be gotten to because it’s been temporarily erased from time so, you know, hopefully we’ll find out it wasn’t actually Gallifrey... where a The Doctor as a young boy (or possibly The Master, we don’t know yet) is hanging out in an old barn. Here we have a flashback to John Hurt walking into exactly the same barn on Gallifrey from The Day Of The Doctor... which can’t be right, right? Being as it’s hidden from time? This is the place,  we're told, where he went to open the ultimate weapon. And it’s here that Clara inadvertently becomes The Doctor’s “thing under the bed” and it all gets a bit... well kind of boring actually but I think they’re going to come back to this at a certain point. I hope not because... one of the key things about Doctor Who is you don’t want to know too much information. The man’s a mystery... let that stand please.

Never mind, though. I loved most of this one. The new guy played by Samuel Anderson as both Danny Pink and Orson Pink is holding his own very well opposite a strong actress like Jenna Coleman and the chemistry between Clara and Capaldi’s new take on The Doctor is getting better and better as the show progresses. If there’s one thing Moffat has got an ear for it’s dialogue and the relationship between Clara and The Doctor is at once totally different while still being old and familiar at the same time. It’s a neat trick if you can pull it off and Moffat and his actors are doing a pretty good job of pulling it off here for sure.

There’s some nice direction and camera work on this one and some nice lighting coming into play in certain scenes which make certain sequences seem fresh in comparison to others. This lends a certain variety and bizarrely overt, ramped up pacing when used in contrast like this. It really held my attention when my mind was in danger of wandering for a lot of it.

Now the really interesting set up here is the relationship between Clara, the impossible girl who has seen all The Doctor’s past incarnations (and now his boyhood if we are to take the clues we are given in this episode at face value... which I refuse to do with Moffat) and the Pink family through history. Now my big problem here is I never really like Moffat’s endings. He always sets things up marvellously but the endings always seem to leave a lot to be desired and don’t always make the fullest sense, it seems to me (especially if you’re having the TARDIS go back in time to a planet which no longer exists in time... ahem).

Still, all I can do is trust Moffat knows what he’s doing here and see it through to the end... and quite probably grumble about it when it doesn’t make any sense but that’s the chance you take when you watch this show in a weekly basis these days, I’m afraid.

So there you go.

Nicely shot, nicely designed, nicely acted and with lots of little manifestations of Murray Gold’s Clara Theme coming in to tug at your heart at the most appropriate moments. Very strong episode but... hopefully not the best of the bunch for this series.

Time will tell... and will hopefully be rewritten.