Battle Beyond The Stars 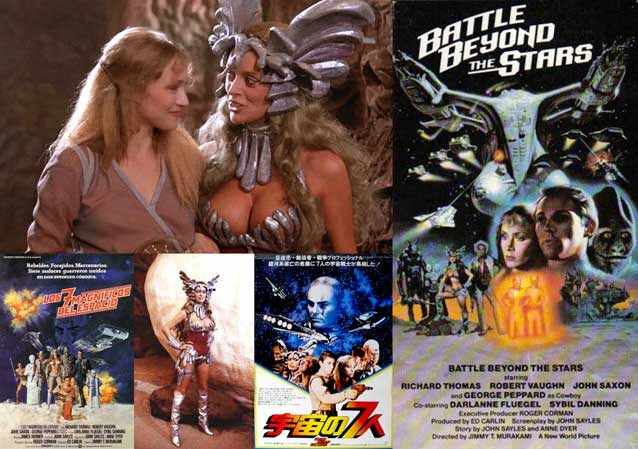 I guess readers below a certain age won’t understand why a film like Battle Beyond The Stars was a big deal with its target audience back when it was released in 1980. It is, after all, a notoriously cheap (although not by Roger Corman’s standards, since the film cost $2 million to make) remake of a classic which is 100 times better than either this or its more famous remake from 1960. Let me give the baffled among you a little bit of context though.

The “space opera” arm of sci-fi had just re-emerged at cinemas again, three years earlier, with the release of George Lucas’ classic Star Wars. There were a fair few bandwagon films like the theatrical release prints of the Battlestar Galactica TV show, Disney’s The Black Hole and the big movie budget version of Star Trek - The Motion Picture coming out around this time to cash in on the success, not to mention much smaller vehicles like Star Crash and The Humanoid. However, sci-fi films were still relatively scarce occurrences at the local cinema so any excuse to go and see the latest extravaganza was always taken. Some of the special effects may look a little ropey today (not as ropey as some of John Sayle’s dialogue in this one, for sure) but in those days it was state-of-the-art and every kid fresh from being reminded of the joys of science fiction from the release of Star Wars: Episode V: The Empire Strikes Back (reviewed here), earlier the same year, would have rushed their parents out of the house straight into the cinema to see this one.

I loved it just as much as everyone else, of course. I think I ended up seeing it three times at my local ABC cinema (now a Tesco car park) and I even remember one of my cousin’s rare visits to Enfield to see it with me, one afternoon. I knew that Shout Factory had produced this deluxe edition DVD and snapped it up when it came out (in hindsight I should have waited for the Blu Ray) but it’s taken this long for me to make some time to watch it and, as you can imagine, I was curious to see how it held up nowadays.

The film starts off with the planet Akir (named after director Akira Kurosawa, for reasons which will quickly become apparent), home of Shad... as played by Richard Thomas (John Boy Walton himself), being threatened with destruction if the planet doesn’t give up its crops and resources to evil Sador (played with villanous relish by John Saxon with a “Donald Pleasance as Blofeld” style scar/make up enhancement on one of his eyes) on his imminent return to their star system after a small time period. All the residents of Akir know is dusting crops and lounging about in simple clothes but they dig out their technological relic of a starship, from decades gone by, and send John Boy, sorry, I mean Shad, out into the galaxy to rustle up a cheap, rag tag team of space mercenaries to return in their spaceships and help defend the planet from the evil Sador.

And if this is all starting to sound just a little bit familiar with you by now, you’ve probably recognised that this is a remake of Akira Kurosawa’s original Seven Samurai. And the film very much follows the main, basic plot points of that movie but condensed into a much shorter running time and with some quite nice and often quite solid sci-fi decoration. I was surprised to see, as I watched this, that the film holds up a lot better than I expected it to after all this time and there are some nice little, well thought out details in this which are worth the price of admission.

Scenes, for example, such as those of one of the main female characters repairing a robot as she plays music by inserting a tape (or advanced technology equivalent of a tape) into a slot into the androids torso... so it can sing the contents to her as she works. Or Shad’s ship whose argumentative female personality talks to him and banters with him throughout the whole film... even going so far as to take matters into her own hands by destroying an enemy ship. When Shad points out to her that she just broke this movies conceptual steal of the first of Isaac Asimov’s Three Laws Of Robotics (yeah, funny how everyone uses those... for good reason) she retorts something along the lines of , “Yeah. It’s a stupid law!”... which was quite a refreshing attitude at the time.

That ship, Nell, by the way, has got to be one of the most beautiful spaceships ever designed for a movie. Resembling, quite deliberately, a giant pair of boobs to rival those of one of the lead actresses (yeah, don’t worry, I’ll get to her in a minute) it’s like a giant, flying, sea ship’s figurehead with the arms, legs and head cut off to just leave a beautiful torso that flies and swoops through space. One of the most unique and spectacular designs of 1980s science fiction by my reckoning. Corman must have liked it too because he recycled all the footage of it and used it as the main spaceship in at least two of his other science fiction movies subsequent to this... which is about right when you think about Corman’s notoriously groovy cost cutting measures on his movies.

There are some pretty interesting actors in here too, with George Peppard playing the Earthman “Space Cowboy” and hamming it up with the best of them like there’s no cheque in the post after this gig. Also, we have the addition of Robert Vaughn playing Gelt, a very similar character to the one he plays in John Sturges well loved 1960 Seven Samurai remake, The Magnificent Seven... asides from the “lost my nerves, cowardice” aspect of the character, which gets ditched here. In fact, some of the dialogue in Battle Beyond The Stars, and with Robert Vaughn’s character in particular, seems to have been lifted pretty much intact from The Magnificent Seven, it has to be said, There’s also a vague attempt to have Gelt inherit this movies equivalent of the Mexican kids who follow around Charles Bronson’s character at one point but, this is only a token reference and I’m not quite sure, to be honest, why they decide to use it here without following it up later in an appropriate sequence.

And, of course, no look at this movie would be complete without a mention of every young boy’s dream made celluloid flesh in the presence of Sybil Danning as St. Exmin of the Valkyrie. They manage to pop one of the most buxom and boobage blessed Austrian actresses of all time, give her some of the skimpiest outfits which make you feel like she’s going to just pop out by accident any minute, give her some specific lines about sexuality (which wasn’t that normal for something which was being sold as sci-fi space opera to kids) as well as giving her the most memorable and oft quoted mantra of the movie... “ Live fast, fight well, and have a beautiful ending.” I’ll bet a lot of young, adolescent teens went home and thought about a whole lot more than space opera when they left the cinemas after seeing Sybil in this movie (yeah, me included).

There are two other things this movie is quite notable for, that I can remember.

One if that it employed a young James Cameron on the special effects crew (listed as art director but I’m guessing he was doing a lot on this production) and it’s reportedly where he met his future wife and movie making partner Gale Ann Hurd, which led to the directing of his second feature, The Terminator.

The other thing this film has is a terrific score by James Horner. Sure, it’s reused in numerous other Horner scores and also borrows from composers like Prokofiev, but however you view Horner’s rampant borrowings, there’s no denying that he writes entertaining scores and this is one of them. However, it's said he’s never been happy with the performance of the orchestra on this score so nothing other than the original album master has ever been used for score releases over the years... which is a shame because I, and a lot of other people, would love to get their hands on some kind of expanded remaster of this one. However, the obstacle to release on this one seems to be Horner himself so, at the time of writing this, it looks like there’s not going to be any movement on that front for a while (probably not in my lifetime, I expect, which is a shame... for me).

And what more to say about this one. At times it’s cringe inducingly embarrassing and at other times a certain worthiness shines through its small budget. It’s not the best movie in the world and it’s certainly not a good remake of Seven Samurai, but it is one of the better put together of the “ride the Star Wars band wagon” films that came out at the time and I’m sure youngsters, and the much older variety of youngsters, will get something out of it even now. And it’s surely worth it to see Sybil Danning rocking and almost popping out of those groovy costumes. One that should not go forgotten, I think.
Posted by NUTS4R2 at 19:38