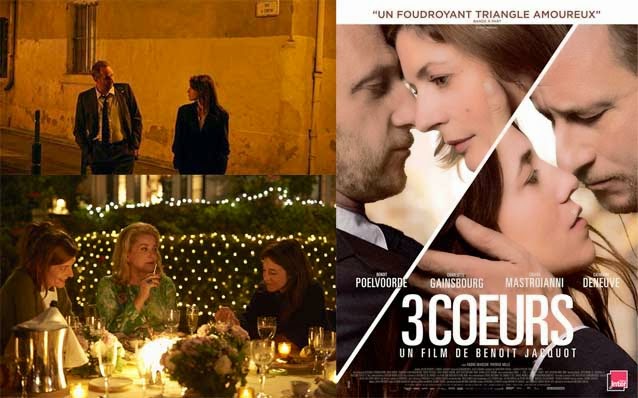 3 Coeurs (Three Hearts) is a film I picked to see as part of this year’s London Film Festival mainly because of the calibre of the three main actresses involved... Charlotte Gainsbourg, Chiara Mastroianni and Catherine Deneuve... although Deneuve is not actually one of the main protagonists of this film, like the first two I mention here.

One of the people I hadn’t bargained for being thrown into the mix is Benoit Poelvoorde, the guy who played the serial killer and co-wrote and co-directed the excellent 1992 Belgium fake documentary Man Bites Dog. It took me a while to place him because he is playing such a charming and unassuming fellow who also happens to be the male romantic lead of this movie. I’m not familiar with the director of this one, Benoît Jacquot, and he’s not a name I  would have recognised although, on the strength of this film, I have to say I should probably seek out some more of this guys work because 3 Coeurs is a really interesting movie.

Now this is not the film I was expecting it to be... which was something along the lines of a long treatise on the way people coincidentally shift in and out of each other’s lives with characters agonising over lost chances and philosophising over the breakfast table. Turns out it doesn’t really get into that territory at all and, though I would have been happy to settle for that, this film is a much more interesting affair because of the way it’s both shot and presented. Let me tell you a little about the opening quarter of an hour or so of the movie because a brief flavour of where the plot starts off will enable me to explain why this film is so different in the way it attacks the heart and mind.

Benoit Poelvoorde plays Marc, a man with a very acute heart condition. The film begins with him missing the last train home back to Paris from a job he is involved with for his work as a tax inspector. Not knowing what to do he has a coffee in a nearby cafe and then spies a good looking girl who he asks about finding a hotel room for the night. On their way to a hotel, he and Sylvie, played beautifully (as always) by the incomparable Charlotte Gainsbourg, start getting on together really well and instead of him staying overnight in a hotel, the two instead just talk and walk around the city, beginning the start of what they think will be a romantic relationship (it is and it isn’t, don’t want to say too much about that). Just like the main protagonists of Richard Linklater’s Before Sunrise, the two plan to meet up later without exchanging numbers. Sylvie offers to travel on the train to Paris where the two will rendezvous at 6pm on the following Friday, at a specific place.

And this is where things get interesting... not on the level of what is actually happening in the movie, but in terms of the way the information is presented. It’s possibly a bit obvious to say that Sylvie and Marc don’t manage to meet up. Sylvie is on time but due to a series of unfortunate circumstances, including Marc feinting in his car due to his heart condition, while racing to the agreed spot, Sylvie eventually leaves before the, very late, Marc can keep the appointment. Now the reason why this particular sequence is good, and the way it informs the film in general, is because it’s done almost as a suspense sequence. You actually do feel, right from this early on the film, that something is at stake here. And one of the main reasons for that is the outstanding choice which has been made in regard to the direction that veteran composer Bruno Coulais takes his score in...

Do you know that sequence in Jean Luc Godard’s Le Mepris (Contempt), near the start of the movie where Brigitte Bardot is sitting on a bed telling a story. The music is suddenly pulled in and it’s overpowering and sinister as heck... at odds with the actual images on screen which, in turn, pops you out of the movie and makes you question it in exactly the way Godard wanted you to do... using it as a distancing device so you don’t get too immersed in the narrative. Well the score on 3 Coeurs is somewhat like that. It’s very powerful on the soundtrack and it’s very, very sinister. It doesn’t quite pop you out of things like the Godard but it is extremely strong and it’s immediately telling you something is going to happen here... something is very wrong... this is more dangerous than you may think. So right from the start you do not want these two to miss their rendezvous but, almost inevitably they do. Now bear with me while I go back to the plot set up for a bit.

Sylvie goes back to the relationship she was about to leave. She runs an antique shop with her sister Sophie, played by Chiara Mastroianni but going back to her current boyfriend who she doesn’t, in all honesty, seem that happy with, means she now leaves the country to go with him at his new work place in Minneapolis, in the USA. Both Sophie and their mother, played by Catherine Deneuve are sad at this turn of events but there’s nothing to be done. However, not long after Sylvie has gone, the antique shop is in trouble for some accidentally undeclared taxes and Marc, finds Sophie in "a state" in the corridor in his workplace. At this point he has no idea that this woman has any connection to Sylvie and the missed meeting, and vice versa, and so he courteously offers to travel to Sophie’s home town and go through her books. The two become involved and...

And that’s where I am leaving the story set up I think. You really don’t want to know much more about the main plot line and it’s not necessary. But what telling you the set up allows me to do is talk a little more about the treatment of the film. All the way through, when things twist and turn in the hearts of the characters, we always have that sinister scoring coming back to haunt us and tell us... yes, this is really dangerous. And since we are talking about “love affairs” here... I have to hand it to the French again, cliché or not, and say that they really know how to treat their romantic plotting seriously. I’m not a stranger to having an affair (don’t even begin to judge me as you’ve no idea of the circumstances and I’m not going to go into them here... other than to say it was the absolute right path to take at the time) and what the addition of the creepy music and the way in which this film is shot (I’ll come to that in a minute) does is to not make light of the people in question. When you are engaged in that kind of activity it can feel dangerous, it can make one of you feel anxious (I’m told) and the way it’s handled in this movie absolutely makes you feel it. So really good work all around there.

The shooting is interesting because you have a lot of long shots of the characters as you gaze at them through restaurant windows or watch them go on walks but, this is contrasted with the emotional weight of some of their conversations being filmed right up close and personal. The director here isn’t doing a Sergio Leone but we do get some pretty hefty close ups of the characters when they are talking about important stuff. More so than I’ve noticed in a lot of other movies and it really helps the spectator focus the mind and listen carefully to what is being said, in words or in body language, throughout the course of the film.

There was a Q&A with the director of this after the screening, with a translator who was trying to keep up with a director going way to fast and saying far too much before pausing, and consequently some of the director’s words may have been, shall we say, lost in translation. However, one of the things I did glean from his words of wisdom was that he wanted to shoot a romantic film in the style of a crime drama. He wanted to try it out and I have to say, when he said that, the sinister, almost overkill, on the music and the way in which the camera follows people around voyeuristically in contrast to the scenes where important information is being exchanged between two characters, all fell into place...

There’s a point in the movie where the family, including the three main protagonists, have all gone for a walk in the woods and have all gone their own ways, split into little groups. Marc is in pursuit of Sylvie who seems to be trying to avoid him, for the sake of Sophie. Marc stops at the edge of a ravine and the tension at this point is so extreme that I was wondering if he was going to kill himself by hurling himself from the top. Then, when Sylvie comes into shot behind him, I wasn’t sure if she was going to go over and kiss him or push him over the edge... it had me guessing and, I have to say, neither of these things happened. But the music and camerawork had come together so effectively that I was obviously worried about the characters big time. And that’s a rarity with me in cinema these days, it has to be said. So the director's approach to the unusual treatment of the material, mixing one genre with the cinematic syntax of another, really paid off.

What more can I say. Brilliant performances, acting, writing, cinematography, direction and composition. 3 Coeurs is an absolute corker of a movie which will apparently be getting some kind of cinematic UK release in May 2015. If you get an opportunity to see this one, I’d definitely recommend that you take it.