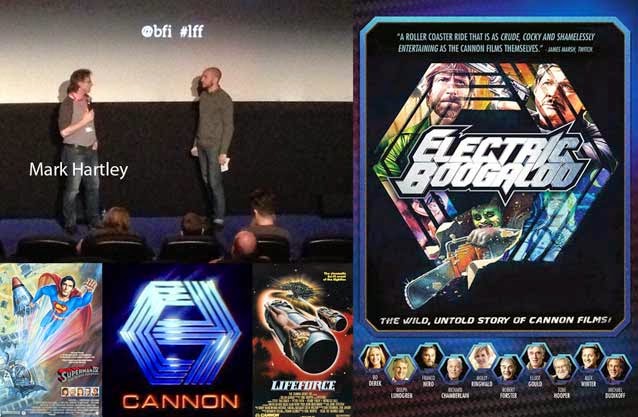 I’ve said this before and I’ll say it again. It’s really unusual to find a documentary film which hasn’t got a very specific agenda being pushed through the movie. Music or a one sided kind of attitude to the selection of footage to fit in with the film makers' ideas of what he or she wants to say is usually the standard for these kinds of affairs. I’m not saying that it’s a particularly bad thing to push an idea through a study of specific angles to push you own ideas, and there’s certainly an art to that, but it’s refreshing to come across the odd one which doesn’t seem to have too much of a personal agenda and so it is with Mark Hartley’s new film Electric Boogaloo - The Wild, Untold Story of Cannon Films.

The film tells the story of Menahem Golan, Yoram Globus and the meteoric rise and eventual fall of their famous Cannon company, which it seems they bought rather than started from scratch with (something I didn’t realise). I was pleased to see the first screening of this movie in this country (to my knowledge) and there was an introduction followed by a post-screening Q and A with the director which is interesting in light of the seeming lack of specific bias in the movie.

The director told us that, while the project started off as a kind of “hero” project, as he began to delve deeper and uncover more alarming professional behaviour (for want of a better term) from the dynamic duo who were mainly known for trash movies... the film took on a very different shape. That being said, I think the tone is less negative than fun and he does show many a “talking head” real life personality with conflicting reviews. I didn’t personally find the movie that negative and one of the pair’s personal assistants from that time, who happened to be an audience member but who participated a little in the Q & A, took pains to point out that, while a lot of the people who had worked with the pair in the film were quite unflattering in their comments and judgement of the two... Golan rarely, if ever, said something that negative about the people working for them.

The film starts off with a really fun filled opening credits sequence which does set the tone for the piece quite nicely and while there are many a conflicting comment on show in the film, if it could be said that the director had any kind of personal agenda on this film at all, then that would probably be to make a fun film and, given the amount of really terrible movies that got made under the Canon brand, he certainly had a lot of good, laugh inducing material to work with, it has to be said.

The film is basically just put together as talking heads intercut with clips which often support the particular agenda of the person speaking at the time but, as I said, rarely... if ever... takes sides. The talking heads include some great people too, such as Lucinda Dickey, Shabba Doo Quinones, The Boogaloo Shrimp, Franco Nero, Cassandra Peterson, Richard Chamberlain, Martine Beswick, Sybil Danning, Bo Derek, Dolph Lundgren and Alex Winter (I could go on here but it would quickly turn into a list article... and you know I rarely do those).

There are some fascinating stories on hand such as one of my personal favourite Cannon movies Breakdance (aka Breakin’ in pretty much all other countries apart from the UK) but I was very disappointed that Lucinda Dickey and her male leads really didn’t get along in real life. Which is a shame. Now I’ve always loved that first movie but never really took to the second movie, which the title of this movie obviously cribs from... Breakdance 2: Electric Boogaloo (aka Breakin’ 2: Electric Boogaloo). That being said I was kinda pleased that the main stars of the two films also hated the second one... so that makes me feel validated somewhat. It was also good to hear Cassandra Peterson (yeah, that’s right, Elvira -Mistress Of The Dark herself) talk about her complete lack of stunt double when she was working on the King Solomon’s Mines sequel Alan Quatermain And The Lost City Of Gold. It’s not a film I’ve gotten around to seeing yet (it’s on the to watch pile, I bought them both when I found out Elvira was in one of them) but when I do I’ll definitely be watching a particular sequence with a certain amount of insight into safety issues.

There was also a lot of stuff I’d have liked to have heard more of. There were a lot of actors mentioned, for instance, who didn’t have any input into the documentary. Chuck Norris, Sylvester Stallone and Gene Hackman (for the Superman IV: The Quest For Peace debacle) spring to mind and, when somebody in the audience asked the director who he’d tried to get a hold of during the production of this film to talk about the Golan and Globus partnership, he did say that he’d contacted everyone and pretty much anyone who we don’t see speaking in this documentary declined. Which I think is a little telling?

I personally would have liked to have had a little window onto the nefarious financial practices the two are supposed to have indulged in to keep their company afloat and their productions going... but the director also answered another question fielding this in which he said that there was a lot more on this stuff in the original cut but that he's had to remove it for legal reasons. Which I think also says a lot.

However, there was some pretty great stuff in here and I loved the fact that the director spent some time on Lifeforce (which Hartley admitted to loving himself... something which I heartily approve) and was pleased that, to counter all the negative things people were saying about the two (and with good reason, from what I can understand... somebody I know was afraid this film might lionise Golam and Globus but it certainly doesn’t do that), he also included acclaimed director Franco Zeffirelli saying, whole heartedly, that Golam was the best producer he’d ever had. So that was kind of nice.

At the end of the day, while this film doesn’t penetrate quite as far as I would have liked (which is understandable given some of the comments of the director after the screening) it is one of those kinds of documentary films which makes up for it in sheer entertainment value. The audience I was with were absolutely lapping it up and there was a lot of laughter throughout the screening. According to the director the film is hopefully getting some kind of theatrical release from Metrodome next year and that, of course, will hopefully be followed by a home video version where some of the 45 minutes plus of deleted scenes from the movie might find a place in. If there is I’m hoping there’ll be a section on my other favourite Cannon movie, Cobra, somewhere in there. Either way though, if you’re interested in the history of film, then Electric Boogaloo - The Wild, Untold Story of Cannon Films is another one of those compelling documentaries about a small slice of our cinematic heritage that you should definitely put on your "to watch" list. Great movie.