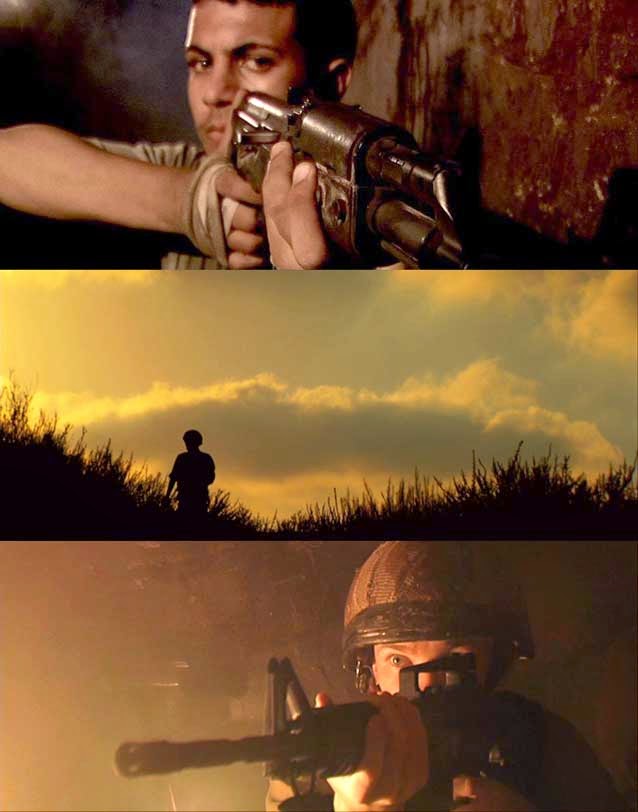 The Tunnel: Gaza-Israel War Border
2008 Israel
Directed by Gennady Kuchuk
Viewed on the internet at the invitation of the director.

You know, one of the perks of writing a movie review blog on the internet is that sometimes, more often than you’d think, you get directors emailing or DMing you on twitter (it’s mostly through twitter) who want you to see their film. It’s a nice compliment because, presumably, it means they’ve read something that you’ve written somewhere (or one of their friends has) and it’s been appreciated by someone at some point. Sometimes it can turn out to be a bit of a bugbear too because, occasionally the films turn out to be not that great and you wonder if you really would be doing them a disservice if you wrote an honest review of the work in question. Then it can get a bit tricky.

However, I’m happy to say that, right from the first, beautifully coloured, 2.35:1 aspect ratio opening shot of Gennady Kuchuk’s The Tunnel - Gaza-Israel War Border, I knew that I was glad this guy had asked me to take a look. To be honest, I found the first few shots of this movie quite astonishing, not just because of the striking clarity of the detail but because of the richness in colour of an opening sequece which is capturing an external location. I could understand it later on, when most of the action takes place in the tunnel of the title, because it must be a lot easier to control the look of interior shots but, seriously, I was really into this movie from the first frame and, anyone who’s read my blog for as long as I’ve been writing it, knows that I’m not that often into viewing shorts (although I’ve seen a fair few good ones over the last few years so I’m really going to have to stop saying stuff like that). Special shout out to cinematographer Asaf Korman for his work here. He also edited this thing and it gets quite inventive in that regard, which I’ll talk about in regards to a montage shot a little later.

Anyway, this movie is essentially a two hander and it follows a patrolling soldier who, after the brief establishing of his character using a couple of props (inhaler, musical photo card of his girlfriend back home), all of which are reused at key moments later in the film, is shown on patrol but then finds himself falling through a hole in the ground and winding up in a tunnel. He can’t go back up and, as he explores his new environment, he finds one of the enemy in there. As they are fighting, an explosion goes off and closes off the rest of the tunnel, trapping the two of them in there.

Have you ever seen Hell In The Pacific. It’s another two hander directed by John Boorman, starring Toshiro Mifune and Lee Marvin as rival soldiers in World War II who are shot down on a deserted island. At first they play military games with each other, each trying to get the upper hand, and then eventually they start to cooperate to get off the island. I don’t want to say too much about that particular film but I wouldn’t be too surprised if I found out that Kuchuk was a fan of that one because he essentially captures the same kind of values and explorations of the human spirit that Boorman did in his feature... except Kuchuk does it in just under 20 minutes.*

Kuchuk doesn’t have Mifune and Lee but he does have two, very capable young actors playing the two lead soldiers in this one called Artur Marchenco and Joelal Msarva. These two do a wonderful job in playing people who start off as rivals and then, when compassion comes into play, they cooperate to try to dig their way out of the tunnel and back into their respective parts of the conflict. There’s some really nice things going on in the performance as the two grudgingly earn a healthy respect from each other as their confinement continues and the director captures the reddy brown hues of the tunnel’s walls, perfectly creating an atmosphere of claustrophobia almost palpable in its illusory intensity.

There are some good things happening in the edit too, especially with a time montage sequence where shots of the two soldiers digging are rotated around as slow moving, 360 degree inserts on a black frame to indicate the passing of the hours and the progress they have made. That's kinda new to me, I think. I don't remember seeing a film that expresses the passage of time in exactly this manner before... so that was a nice surprise. Especially with Dimitri Lifshitz’ deceptively simple score gluing it all together with a melody that adds weight to the almost hypnotic circular motion of the sequence. This is good stuff.

At last knockings, I don’t want to give too much away about this film because it’s worth you taking a look at it some time. I will say that the ending is a little bit clichéd but, at the same time, if it hadn’t have ended in the way it does, you might have felt a little bit cheated by it and, besides, the final pan shot across the desert sand and the quick glimpse of something else you get is such a nicely understated gesture to the gravitas of what’s just occured that I wouldn’t have wanted to miss that final and subtle, visual moment.

The Tunnel: Gaza-Israel War Border is available to rent or buy from Indie Reign here. The film is also available on demand at Distrify  here and if you want some more information about the film, including a trailer for it, it can all be found here. A nice little movie about the nature of conflict and the way in which your personal politics evaporate in light of the chance of survival, the enlightenment of empathising with your enemy... and the ultimate price you pay for your peace. Check it out when you can.

*Between writing this review and publishing it on my blog, the director contacted me again and told me he’s never seen John Boorman’s Hell In The Pacific. Which is great because it means he’s got a great movie to add to his “to watch” list and I think he’ll like it as the two directors both tackle the same kind of themes in a very similar, head on manner. Hope he likes it.
Posted by NUTS4R2 at 19:37