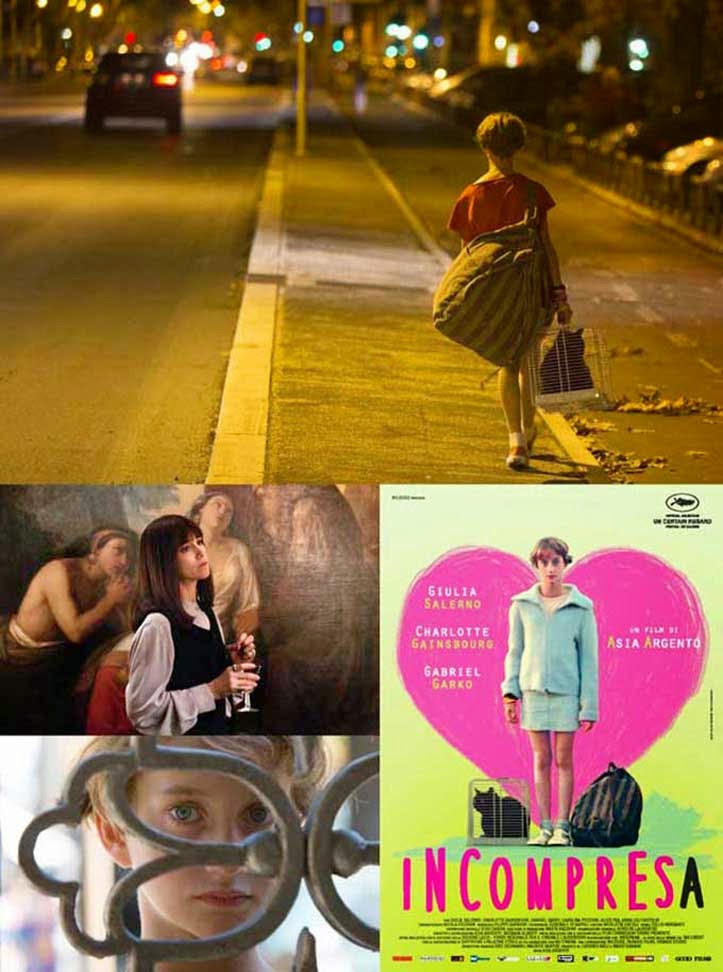 Incompresa (aka Misunderstood)
2014  Italy/France
Directed by Asia Argento.
Seen as part of the Raindance Film Festival on Saturday 4th October

I’ve been aware of Asia Argento as an artist to be reckoned with for a decade or two now. Ever since getting interested in her famous father’s various gialli and horror films and seeing her pop up in a few roles in both his and his contemporaries’ movies such as her feature film debut as an actress in Demons 2 and through to such classic Dario Argento films as Trauma and The Stendahl Syndrome (amongst others).

She’s also, of course, a very beautiful model, on top of being a talented actress, but the thing that pleased me most about this woman was about ten years ago when I finally got around to seeing her debut as a feature film director, Scarlet Diva. There were some really great things going on in this film and the camerawork was both inventive and unintrusive, when it needed to be, in equal measure. I remember saying to a friend of mine at the time that I thought she was maybe an even better director than her father.

She hasn’t directed that many features over the last 14 years since Scarlet Diva and I’ve never understood why. In fact, despite working behind the camera on a lot of shorts, Incompresa is only her third feature, following on from The Heart Is Deceitful Above All Things (a film I’ve not gotten around to seeing, I have to admit). So when I saw her tweeting over the last year or so about the film she was making (Yeah, I follow her on twitter, what can I say?) I was getting kinda interested in seeing this thing and when she announced that there would be a couple of screenings in the UK, as part of the 22nd Raindance Film Festival in London, I was straight on the phone to my friends to see who wanted to go with me.

Incompresa is the story of a young girl growing up in a troublesome family environment, split between an artistic father, who is an actor, and a pianist mother who are at each others throats whenever they are occupying the same homes... which is rarely. The whole scenario is seen through the eyes of the daughter, Aria, who also has a sister (who is her mother’s favourite) and a loathsome step sister (who is her father’s favourite). Aria is just trying to lead a normal life in a world where the sting of disappointment and unfair peer pressure is taking its toll just a little more than usual.

It would perhaps be a little too easy to say that Incompresa is an autobiographical film. There are some striking resemblances that could easily appear to an outside observer, aka the audience, to be indications that the director is what this film is all about. The young protagonist’s name Aria is only one letter out from Asia, for instance. The always fantastic and watchable Charlotte Gainsbourg here plays Aria’s troublesome mother, a self confessed “love witch” and the way she is made up in the movie strongly calls to mind the presence of Asia’s real life mother, the equally wonderful Daria Nicolodi. Anyone who knows anything about some of the stories about how Suspiria and the Three Mothers trilogy came into being will know that there’s a strong connection to witchery there too. Similarly, I’ve no idea if Dario Argento is superstitious or not but the “actor” father of Aria could easily be a surrogate Dario for all I know.

So yes, a little tempting and, as I said, too easy a target for accusations of biographical intent, especially since Asia Argento has maintained that the movie is not intended to be. That being said, however, she is very much an artist and artists do tend to take what they know and plough it back into their works... so I don’t think it would be too unfair to say that there’s also an element of the finished product which takes bits of her life and reshapes them to fit the overall drama. Or so it seems to me, anyway. That's pretty much how everyone working in a creative medium uses personal experience to shape and inform their art.

The structure of the film is not what I was expecting. Rather than take a specific arc from one starting point to a place where a sense of closure is maintained, the story is episodic in nature and presents dramatic sequences which build up a gradual picture of the main protagonist, through the observations of both the problems and the good times piled onto little Aria, played so assuredly by Giulia Salerno. In fact, the constant traipsing between the houses of both her father and her mother as she commits some new wrong and is expelled from each of her father’s or mother’s house in turn, time after time, make this seem to be something of a road movie at heart. Aria certainly wears out a lot of shoe leather in her to-ing and fro-ing and, it has to be said, the sequences where she is seen journeying from one house to another is used as a form of punctuation or grammar for the piece... sometimes invoking a comical reaction and, at other times, underlining the drama of a situation in the most moving way.

In a way, it’s the journey that’s always the important bit in this movie, rather than the destination, and as Aria stirs up trouble with black cats and pigeons (her father is depicted as a victim to superstition), stolen letters and various other attempts to explore her life and gain the attention of the kid she likes in school, the more we become aware of something that maybe some of us have forgotten over the years... how hard it is to be a kid.

Of course, Argento frames the various adventures of her young characters with some of the best compositions she can find in the various locations... the vision of Aria walking away from the camera at a three quarter angle against a vertical slatted fence which perfectly frames the perspective is a shot that springs to mind... and I wouldn’t expect anything less from her. What is more telling is how close I think she must be to the heart of the story she is trying to shape. She manages to coax some amazing performances out of all the kids in this film, with the aforementioned Giulia Salerno absolutely knocking it out of the park in terms of conjuring up a little girl who I totally believed in throughout the running time.

My favourite part of the film, for instance, is when Aria stumbles across a group of homeless people and stays with them for the night, making a connection based on the spirit of movement and exploration that captures the hearts of her new, adult companions. The relationship she creates with the young rock star boyfriend (one of many boyfriends her mother courts throughout the film) is also a great series of moments in the film and also shows that Asia Argento hasn’t forgotten to show the good things about being a kid too. Which is refreshing in a film which seems to court tragedy as a friend.

Now I’m not sure if Incompresa is going to get a general release over here in the UK but, even if it doesn’t, I’m pretty sure something this well made should hit DVD or Blu Ray over here at some point. It’s one of the more entertaining and moving motion pictures I’ve seen dealing with this kind of subject matter (yeah, alright, I admit to tearing up in two places, okay... but only for a minute, honest) so I’m hoping it gets some kind of release soon. If you like films which try to find the truth through the journey of a child’s heart then this one is definitely worth some of your time. And like I said, both Giulia Salerno and Charlotte Gainsbourg give some terrific performances here so you don't really want to miss that. Once again, Asia Argento flexes her movie making muscles and shows the general public a side to her they never knew before. And, of course, she also reiterates that she is a film-maker to be taken very seriously.
Posted by NUTS4R2 at 19:55