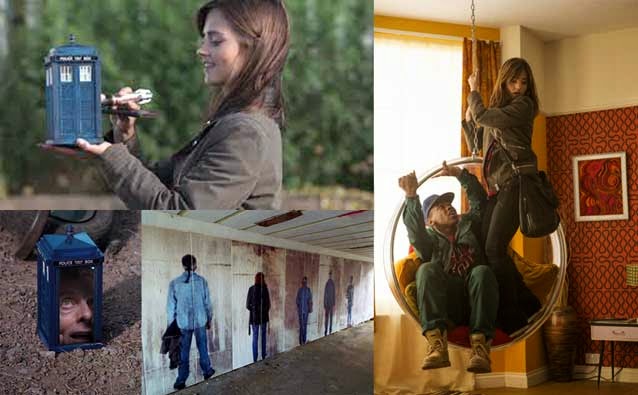 Now this was an interesting episode for Doctor Who although, for me, I have to say it was also a little dull.

With The Doctor trapped in a shrunken TARDIS, it’s up to Clara to save the day in modern day Bristol as she investigates a series of strange disappearances, carrying the TARDIS around in her hand bag and talking to The Doctor through an ear piece with which he’s also hacked her optic nerve, so he can see what’s going on... nice idea that.

Another nice idea is that the “monsters of the week” dissect their victims and leave 2D versions of bits of them around as tell tale scene of the crime stuff. For example, when a police woman is sucked into oblivion through the carpet, a flattened version of her nervous system is placed on the wall. All good stuff and I’ve always had a strange fascination overtake me whenever I look at old illustrations of the human nervous system so... this was all good stuff. And, indeed, so was the old but rarely used idea of beings that exist in only 2 dimensions. Yeah, okay, some of us may find it a little clichéd but it’s not been done that often in Doctor Who and it’s never really been made “a thing” of before, so brownie points to the writer for that.

We also had the wonderful Jenna Louise Coleman taking over as a stand in for The Doctor while the always excellent Peter Capaldi could only give advice from his tiny environment. Although, to be fair, the scale issue had some problems in some of the shots, which seemed to be having some continuity issues and, frankly, issues with what could and couldn’t fit through the doors at various times, to a certain extent, I thought.

So, anyway, Clara takes over and saves the day in the end, kind of, when she does something jolly clever, with the help of a graffiti artist and the almost blind hindrance of one of the guys who was also on the rooftop at the start of Tim Burton’s Batman. So that was all very nice and it was interesting hearing the distinction made by Capaldi’s more grown up incarnation of The Doctor between doing something good and doing something very well... implying that he’s becoming more conscious these days of all the harm he sometimes has to do in the hard choices he makes when vanquishing his foes... so all that was very interesting and clever and I think I should probably have appreciated it more.

One of the things which made me appreciate it less was the execution of some of the special effects. I don't mind stop motion animation at all... I think it’s quaint and charming and it certainly has it’s place, even in todays CGI world... but the use of it here (or something which looked very much like it, no matter how the effects were done), just looked cheap and child like. As did the 3D renditions of the 2D monsters in their final form, to be honest. It just looked a bit rubbish. Not as rubbish as the miniature train speeding through the tunnel model used in a couple of shots, to be sure, but when you combine all these different things the effect seemed to me to be the rare occasion when the lack of good visual effects actually does impact on the telling of the story... not something I’d thought I’d ever hear myself say, to be honest. I usually don’t care about such irrelevant issues as the special effects.

However, to counter that, lots of nice things too... such as the idea that some of the victims have bee placed, backs towards us, in the graffiti in a tunnel... that was cool. And the groovy bit where The Doctor uses his hand to move the TARDIS, almost, out of peril and resembling a snail... highly entertaining stuff. We also have a very sinister and threatening epilogue with the frequently appearing Missy, this week, which reveals that Clara is being used for some kind of sinister plot. That’s worrying... I wonder if Clara will be replaced by “Missy in Clara’s incarnation clothing” at some point. That would be kinda horrible and outrageously cool all at the same time.

All in all this is not my favourite episode of the season although, it has to be said, it was better than the majority of them. Still wondering what’s happened to the music in this series. Seems to be very underpowering, to say the least, although a James Bond like bass line was definitely prominent in a certain scene this episode. It’s all, certainly, still enough to keep me watching the show and I am definitely intrigued as to where this will all be going by Christmas, for sure. So... a short review but not much more to say on this one, to be honest. A solid script, poorly handled in places but not without a lot of charm. Looking forward to next week’s one now.
Posted by NUTS4R2 at 12:06