Doctor Who: Kill The Moon 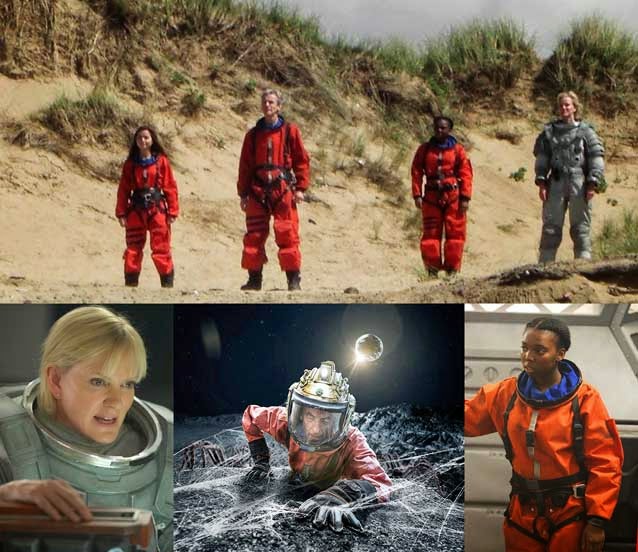 Warning: Very slight spoilers here but... honestly... it’s not worth worrying about, I reckon.

You know, when I saw the trailer for this one last week I was somewhat underwhelmed by it. Not so much by the cheap lack of location shooting... Doctor Who has always been about doing things cheaply... but by the possible lack of story we might get in a setting like the moon once again. But, I’m always game to see what they come up with next...

Now I’ll say up front that there were some very good things about this episode and I’ll get to those a little later but I must say that my fears were somewhat justified because, after a damned good lead in for the first twenty minutes or so, with the TARDIS materialising on a space shuttle that’s crash landing on the moon, the atmosphere was quite chilling and that’s, in my opinion anyway, pretty much how a lot of Doctor Who should be... allowing for a little diversity here and there. However, what we were presented with this week was not so much of a story as a moral dilemma. Which in itself isn’t a bad thing but the way it was explored seemed less interesting to me and, for the majority of the second half of the show, I didn’t care about it one way or another and I would have been just as happy if every one of the characters had met an untimely end.

One of the reasons is that I can’t believe The Doctor hasn’t been on the moon later than the year 2049 before. In fact, as I just wrote that sentence I decided to check by randomly doing a search on the first moon based Doctor Who story that came to mind, The Moonbase. Yep, sure enough, Patrick Troughton took on the cybermen on the moon in the year 2070... so I think if what had happened at the end of this story, prior to that one, had indeed happened in the continuity of the series, then I think The Doctor might have noticed something not quite right about the moon’s chemical make up about then... I’m sure no two moons are identical, after all.

Another big problem for me was the science of the thing. Now I’m not a scientist by any means but I threw the question out on twitter last night and, asides from being completely off about the age of our beloved and cherished celestial body, the shockwave and other things like, for instance, the fact that there are clearly still tides visible on Earth when the moon has parted company, makes the story seem more like a fairytale for kids and not something you’d schedule in your programming at 8.30pm on a Saturday night. This kind of stuff kept bothering me all through the episode and since none of it was explored in any great detail, I stopped caring about what was going to happen half way through this one. It lost all credibility for me.

There were some positive things about the episode, however.

Capaldi was great as The Doctor and so was Jenna Coleman as a much toughened up version of Clara. There was a hard moral dilemma in the story and although the dialogue pertaining to it left me a bit cold, the dialogue dealing with the relationship between The Doctor and the people who he is surrounded by was very “on the nose”. We had Clara getting very angry at him too and giving the impression that she’s left The Doctor behind for good... although she obviously hasn’t. And it’s not surprising actually because, and I think some people might have missed this because she didn’t address it in her tirade against The Doctor, the TARDIS only rematerialised to pick up Clara and the others after she had stopped the countdown with only one second to spare. Which means, if she hadn’t have stopped the countdown, there would have been no way for The Doctor to jump in and rescue them, he wouldn’t have had the time... they’d be dead.

Which sounds like a grim option for a time traveller but there are precedents for why he couldn’t have looked ahead and gone back earlier scattered throughout the series over many decades. Now that is a good reason for Clara to have a very adverse reaction to what’s happened to her and I think her outburst and decision was a good one. Capaldi’s Doctor was being as coldly ruthless as he could get back in the William Hartnell days on this one and that’s no bad thing. That being said, however, I do think the Danny Pink character now bears watching a little closer. There’s a chance he might have been “got to” and could be the enemy of both The Doctor and Clara for all I know, judging from his advice to her at the end of last night’s episode... sound advice or not. Keeping my eye on him for a little while because he might not actually be who he at first seems, I suspect.

The other positives were that the sets didn’t look that cheap, they were well shot and used, the costumes didn’t look tacky as you would expect and the first twenty minutes or so had, as I said, a great atmosphere. The downside of that, of course, was that the “giant spiders” were a bit, well, a bit unthreatening and just didn’t seem like anything I should need to be frightened of... and I say this as a confirmed arachnaphobe, I assure you. So there’s that.

All in all, although I appreciate the huge amount of work that’s obviously gone into this episode and quite like the darkened tone, somewhat, I have to put this one down as truly an episode I would like to forget about as quickly as possible. When science fiction ignores science then it becomes something far less interesting, as far as I’m concerned.